I've been in Athens for just under a week now, and thought I would write a brief travelogue post to keep you all informed. I'm nice like that! The first 3 days in Athens were a bit of a roller-coaster ride, with so many new things going on at once. This started from leaving my house back in England, organising a few additional things on the way to Gatwick in the car, and finding I only had five pounds in in my pocket at the airport. I had to make a quick choice between a beer or a McDonalds. Which do you think won out?

Apart from the excitement of arriving in Greece, moving in to the flat, and a few other things (which I won't go into here!), there were two other events which made my first 3 days in Athens busy and fun. The first, was visiting the HORECA Expo, which is a trade fair for the hospitality and food service industry. What were we doing there, you might ask?

3 reasons really – We had free tickets, it was a good way to sample cheese, breads and meats from around the country, and wonderfully, quite wonderfully, there were plenty of free beers to sample. Pinch me now!

The trade fair was a busy place, and whilst some of the things such as industrial coffee making machines surprisingly didn't interest me, sampling some of the food and drink that Greece produces did. Some of the stand-out foods were a honey mixed with cinnamon, and a couple of hams. The freshly made pitta bread was nice as well. One stand that really caught my eye was a spice retailer, and in particular this section of chilli's.

Lets not forget the beer of course! There were dozens to choose from, and whilst the large brand names such as Amstel were represented, it was the small Greek microbreweries which appealed to me more. Some of the lagers were a little nondescript, but rather surprisingly, there were some very good porters and ales. Perhaps my favourite was the Voreia India Pale Ale from the Siris Microbrewery. They were obviously impressed with my impeccable taste, as they gave us a few bottles to take home! I'm not too sure how easy it would be to find within Greece, let alone outside Greece, but add it on to your ‘beers I must try list'!

It was no good drinking too much to get a hangover though, because the following day, we went on a mountain hike! We were part of a group of 70 people, who were a mix of locals, couchsurfing hosts and guests, students on exchange, and randoms. I suppose I fell into the random category! The weather held out well for us, and there were some stunning views from the top of Ymittos. 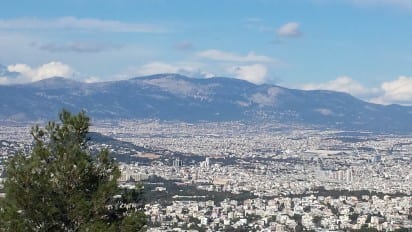 We covered over 12 kms hiking up and down the mountain, and finished off the day by having a shared meal in a taverna. There were 27 of us in there, which was a fun experience to have, and we had a negotiated deal for food and drink for 10 euros each. Lovely!

So, the first 3 days in Athens were pretty full, and if they are any indication of what my life in the Greek capitol may be like, I should be in for a good time!

And finally, although the Greeks have a fascination for coffee, I have discovered how to get a good cup of tea… 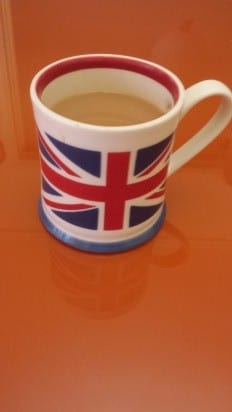 … But you do have to make it yourself!