During a recent road trip around Greece, I stayed in a place I dubbed – Hotel Most Likely To Get Axe Murdered In. Interested in finding out more?

Let me start this article on the ‘Hotel Most Likely To Get Axe Murdered In' with an apology. I have been on the road for over a week, and haven't updated Daves Travel Pages as much as I would have liked. That's about to change though! This road trip through Greece has given me masses of material to work with. It's going to take a while to get through the notes, hundreds of photos and hours of video though! In the mean time, let me leave you with some photos taken of a place I dubbed the Hotel Most Likely To Get Axe Murdered In. 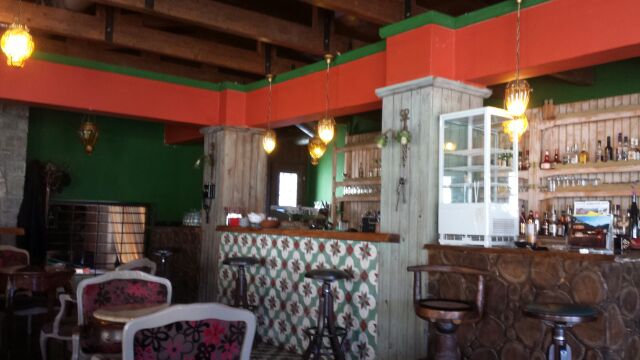 Hotel Most Likely To Get Axe Murdered In

Before posting the photos, I just want to clarify that this place was actually outstanding. The rooms were excellent, and the staff friendly. I'm not going to mention the name of the hotel though, as I don't want this to be negative towards them in anyway. It's all just a bit of fun, although if you are interested in finding out the hotel name, you can leave a comment below.

Time to set the scene – We were travelling slightly out of season. Greek Easter break finished just a few days before, and spring was starting to establish itself. Snow-capped peaks and forested hills were the back drop to our route through a mountainous area. And it was quiet. We perhaps encountered only a couple of cars an hour as we approached Kallirroi. Our hotel was a big, rambling affair, and the lack of cars indicated that we were the only guests. 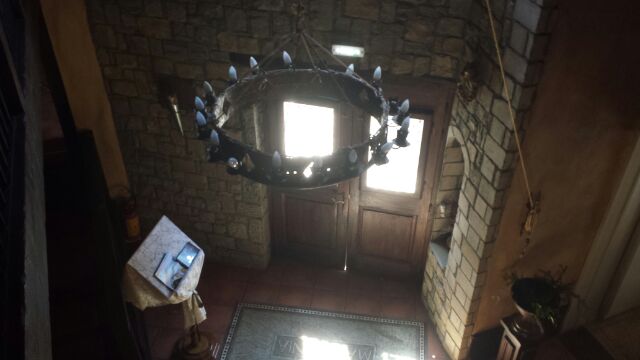 At this point, I began to think of the film ‘The Shining‘ staring Jack Nicholson. Especially as upon entering, we then started a game of hunt the staff. 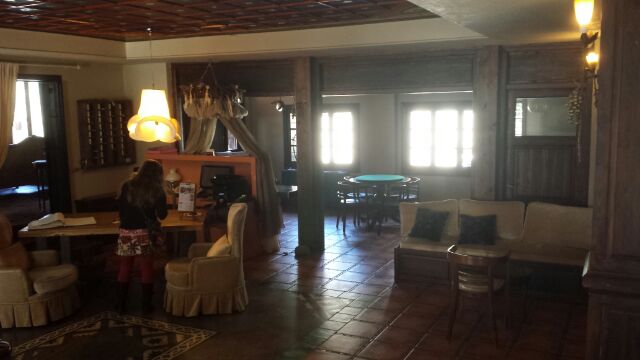 We soon found them though, and signed in at reception. On being shown up to the room, we passed by this table. 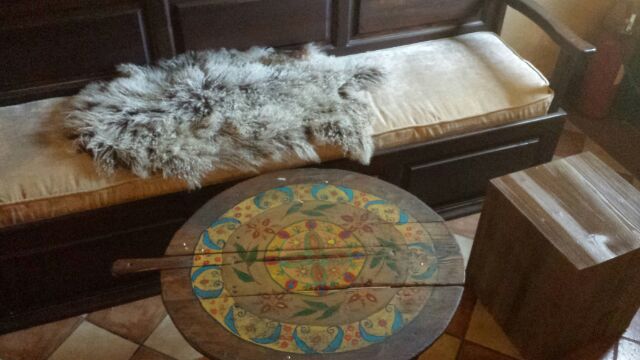 It was almost impossible now to stop the feeling that we would be victims to an axe murderer at some point during our stay! What sort of twisted mind could have thought up that interior design? Hopefully, the room would prove to be some sort of sanctuary. 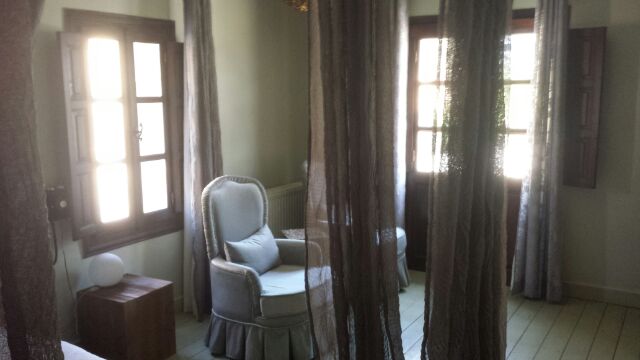 Or was it?! At least there was a telephone to dial for help if we needed it. 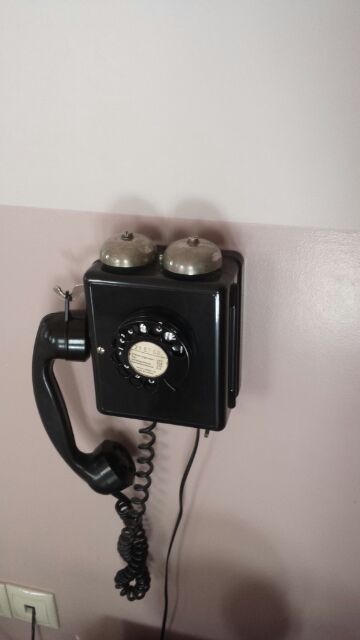 It's really hard to get something out of your head once it's there! Still, we settled in, and headed down for dinner. 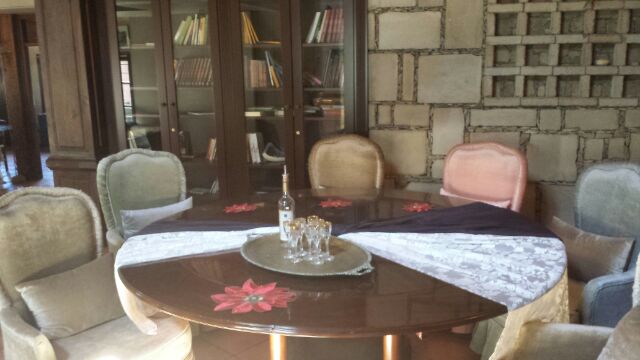 This wasn't the actual table we sat on, but still!! Come on guys! It would only take the lights to be dimmed for one minute, and then to come on, to find someone poisoned at the table! 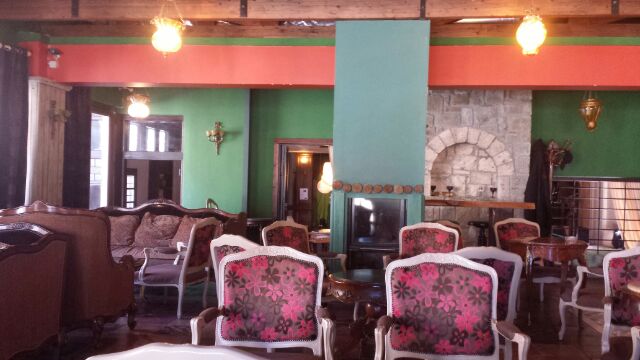 Dinner was actually wonderful though. A country recipe which was pasta and chicken baked in a pot. Note to self – I really need to get more exercise and get on a diet at some point! 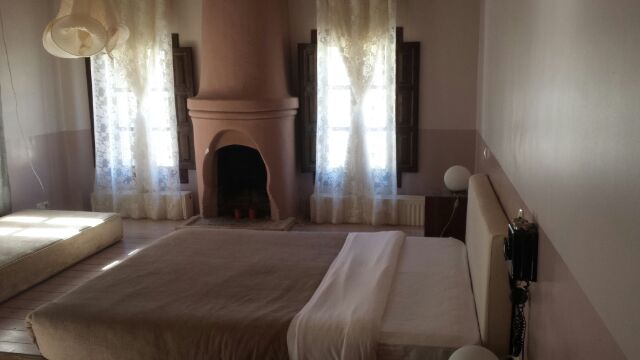 Off to bed and a good nights sleep then! The door was quite thick, so I was certain it would take Jack Nicholson at least five minutes to hack his way through.

Breakfast was a quiet affair, and it looked like we would be leaving the hotel most likely to get axe murdered in, in one piece. Not before a tour of the wine cellar though, but first the guy had to get the keys… 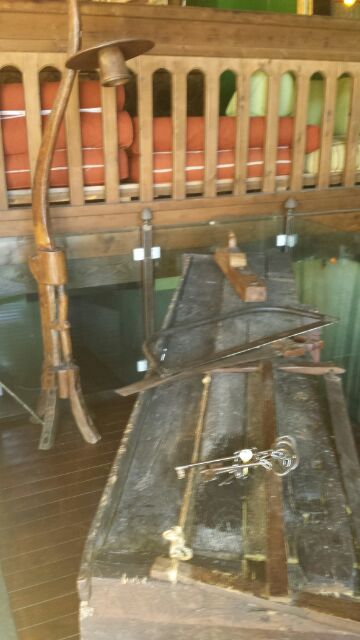 .. from what looked like the place they hack bodies up in their spare time! Ok, so weird keys but never mind. It was time to see the wine cellar… 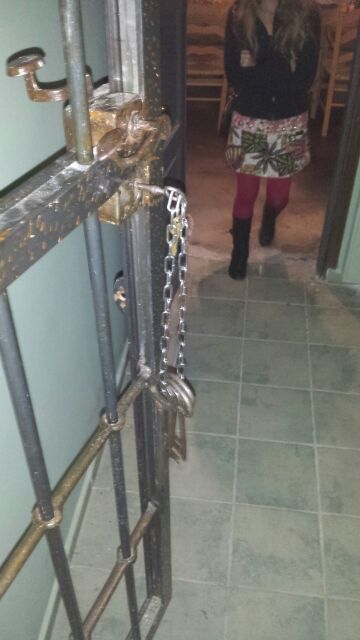 … which of course could only be accessed via a dungeon door! Inside were a great selection of wines lining the walls. There was also a huge table in the middle. 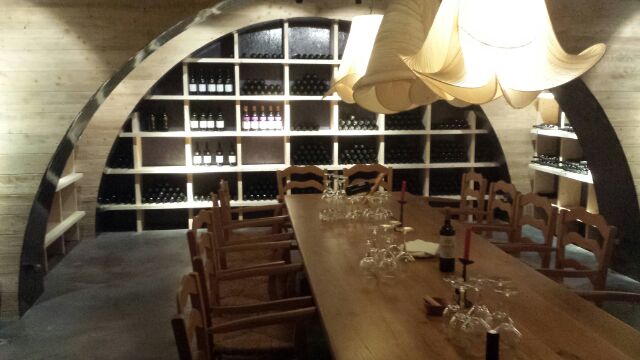 I stopped thinking of Jack Nicholson at this point. Mainly because I thought of Hannibal Lecter slicing the top of that guy's head off and eating his brain. Not that it was going to happen to us of course… was it? And then our guide showed us two secret rooms which led off to the side. What would be in there? 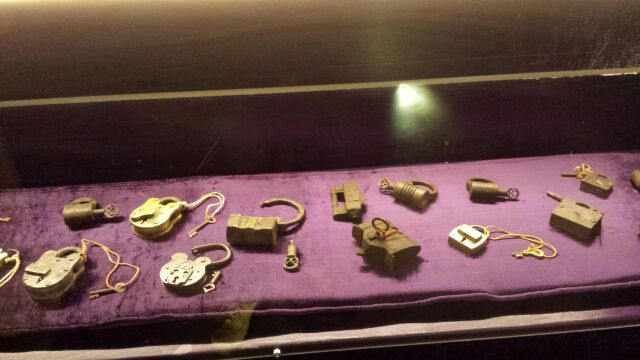 A random collection of padlocks of course. What else would a dungeon have!

Time to make a swift, sharp exit then! We got out in one piece, and drove off to continue our road trip in Greece. The hotel most likely to get axe murdered in will always have a special place in my heart though!