I've always wanted to visit the Golden Temple in Amritsar for as long as I remember. During my train journey around India, I finally got the chance! read more in this India travelogue update.

When I eventually arrived in Amritsar after a long and arduous journey, I checked into a hotel which the Lonely Planet described as a mid range one.

It was moderately priced, but the novelty of the cushioned swing in the room didn't offset the fact that the TV didn't work, the toilet didn't flush, the hot water was non existent and the room was generally tatty.

I was so tired that I stayed the night anyway, but the next morning (Monday) I changed hotels straight away.

I visited the Mata temple which was like a bizarre grotto of Gods and Goddesses, through which you walk up stairs, crawl through tunnels and walk through a stream.

I think the tacky Christmas lights made it all that bit stranger. I also visited the Shri Durgiana Temple, and the Jallianwala Bagh memorial. Then it was on to the Golden Temple. 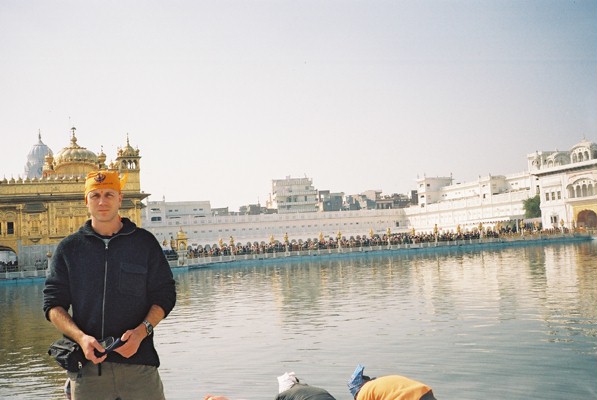 I've always wanted to see the Golden Temple, and it was everything that I had imagined. Amritsar and the Golden temple is a really special place, and more than worth the journey to reach it. For me, it was a real highlight of my train journey around India.