Last updated on February 17, 2020 By Dave Briggs Leave a Comment

Two teenagers from the UK have just finished cycling from Beijing to Tehran. Not content with merely cycling 10000 km, they have also helped raise £25000 for charity on the way. Here's an interview with Charles and Will, covering the where, the why, and the how. It's an incredibly inspiring bicycle touring story, I'm sure you'll agree! 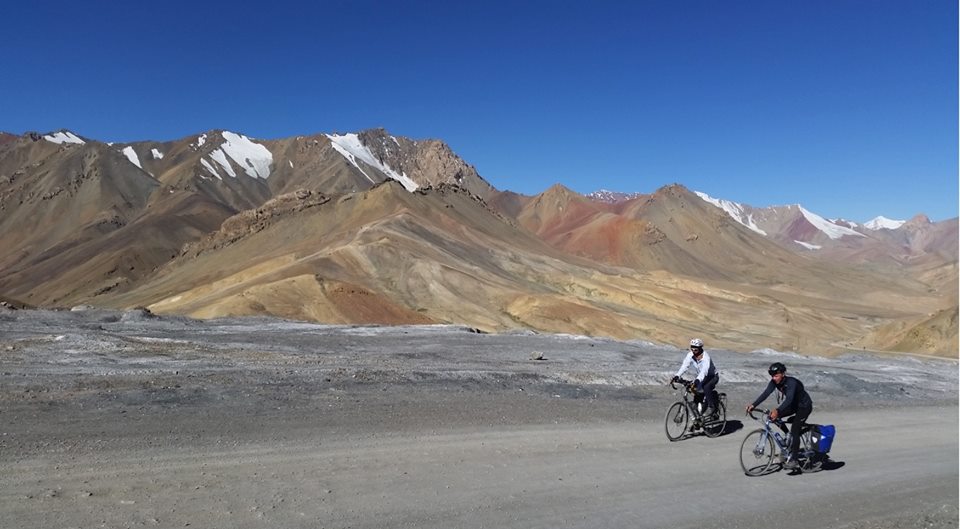 Everyone has a story, and stories about bike touring never fail to inspire me. Every now and again, I interview other cyclists on bike tours and share them with you in a feature called Meet the Cyclists.

Here's an interview with Charles and Will about their bike tour from Beijing to Tehran. If you would like more bike touring inspiration with interviews from other cyclists, sign up to my newsletter below!

Cycling from Beijing to Tehran

Hi guys! Please introduce yourselves, and give a bit of background as to who you are, and how you know each other.

C: My name is Charles Stevens, I am 19 years old and live in London. Will and I are friends from school, and both wanted to do something challenging during our gap years. Whilst I have cycled before, I have done nothing like this, though in 2013 I cycled from London to Paris for Cancer Research UK.

W: I am William Hsu and I was brought up in Warwickshire. I'm starting university in one week at Bath University studying International Development and Economics. As Charles said, we've been friends after being at school together for the last five years, and somehow conceived the mad idea to go on a big cycling trip. I had never done anything like this before, but I've been lucky enough to travel a lot from a young age which I think is what inspired me to do this.

What were the motivating factors behind cycling the Beijing-to-Tehran ‘Silk Road,'. Was it for the personal challenge, to raise money for charity, or a combination of things?

C: A combination of things. The charity aspect was absolutely crucial and was a large motivational factor throughout but at the same time I wanted to do it as a personal challenge too. Whilst the aridity and climate in the regions makes this route very challenging, I also wanted to explore this part of the world and though I didn't see as much as I wanted due to the challenging time-frame and being too tired to do anything but cycle I still saw plenty.

W: As I mentioned, having the opportunity to travel to such fascinating places steeped in history and natural beauty were motivators. However, when this was combined with a challenge like no other of cycling 10,000km and being able to raise money for such a great cause as ACU, this is when I was convinced it was what I wanted to do.

Can you explain a bit about the money you raised, and the charity it is for?

C: We are thrilled to see as of yesterday we achieved our fundraising target of £25,000 and are hugely grateful to all the people who donated to the cause.

The donation goes to a charity called A Child Unheard who are taking over the running of a school in Ghana which we have visited on several occasions.

When we were last there in September 2015 it was at risk of closing down and having both a strong link with the children and staff at the school and seeing the vital importance of education this is why we decided to put our efforts here.

The nice thing about ‘ACU' is that it puts all of the money donated towards the important grassroots work and it does not go to peripheral administrative activities like some other charities.

W: We have been able to raise £25,000 for A Child unheard thanks to not just generous friends and family but also support from companies and foundations such as Invest for Child (visit investforchildren.org) , Certainty.co.uk and Pledgit (visit Pledgit.net). 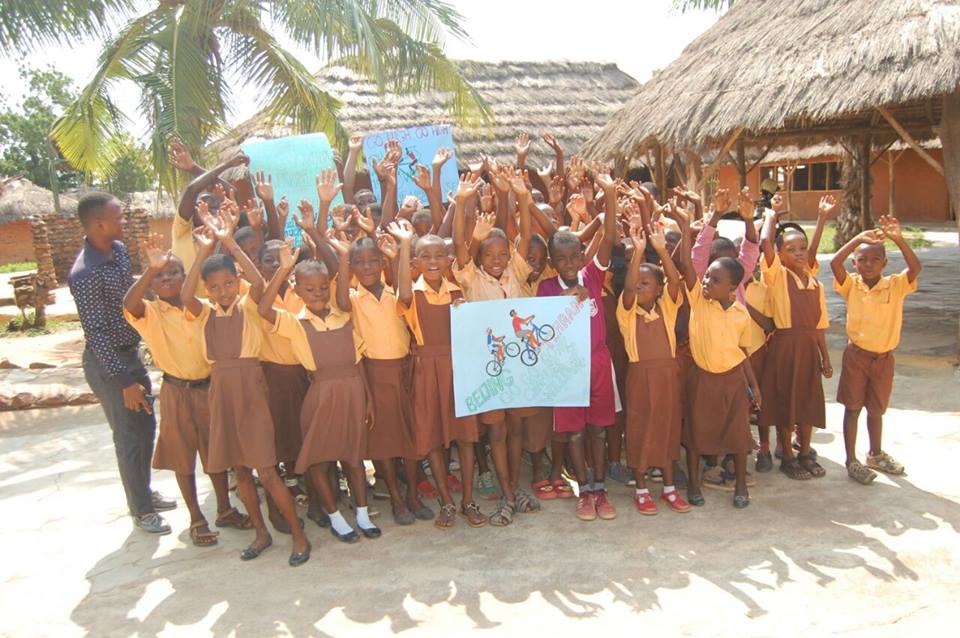 Bicycle Touring from Beijing to Tehran

Ok, we are on to some bicycle touring questions now! What was the route you took cycling from Beijing to Tehran, and how many kms did you cycle?

The total distance was just over 10,000km and saw us traverse across three major mountain ranges, two of the largest deserts in the world as well as 1000s of km of the vast central Asian steppe.

Whilst we had days as long as 190km, which happened to be into a nasty headwind with 1500 metres of climbing just to make things harder, our average length day across the trip was about 120km. this included days on off roads, and climbing in the mountains.

How did you save for the tour, and what sort of bike touring gear did you take?

C: Well I worked in a supermarket for several months as well as a home wear store and did some tutoring on the side so it was a lot of work but that raised a considerable sum. My parents also kindly contributed for the last bit so I have been saying a lot of thank you's ever since!

In terms of gear we brought an array from wet weather gear, wind proofs and thermals. Sometimes it looked like we were going skiing rather than cycling as we were bundled up but at times it was as cold as -7 degrees. Along the way we could improvise with stuff we had prepared for like sandstorms. It would both hurt and get into your eyes causing irritation so when we got to Ulan Batar we brought cheap skiing googles so it really did look like we were going skiing!

W: I worked in a pub for several months and I was living at home and I've always been a saver so I managed to save up quickly. But I also had help from my parents for paying for the trip. Bikes and equipment can be expensive but once you have it you'll have it for years to come so I can now go on cycling trips with virtually zero upfront costs apart from flights and living expenses. Taking the right kit is important, especially cycling shorts! But it was hard to bring gear to cover temperatures from -10*C to over 40*C so I feel I had too many clothes at times.

Where did you stay when you cycled?

C: We had a mix of accommodation was it was 80% camping. A lot of the time we were very remote so there wasn't the option but when we entered big cities like Almaty we stayed in hotels.

How much did you spend on average per day? How many kms a day did you average? Any serious problems with the bikes along the way?

C: Our average was around 6 hours a day of riding time though we had as long as 12/13 hours riding time and as short as 3. Our bikes were very good along the route and I will certainly keep using my Condor but there were a few unexpected things. My bottom bracket disintegrated from the off road. It was 400km to the next place were it was vaguely possible to fix it so it was not fun riding on that for several days. I had two flats over the whole ride which was very good but Will had closer to 10. We spent quite a lot of time maintaining our bikes to try and minimise wear and tear so that helped as well.

W: It averaged out at less than £10 a day, you spend much less than this when you're on the road but it's once you get into big cities and start going to restaurants or bars that things get expensive. We also had some unexpected costs, I needed to by a new tire and Charles's laptop broke along the way. I had no problems with the bike just 10 punctures and 3 ripped tires! 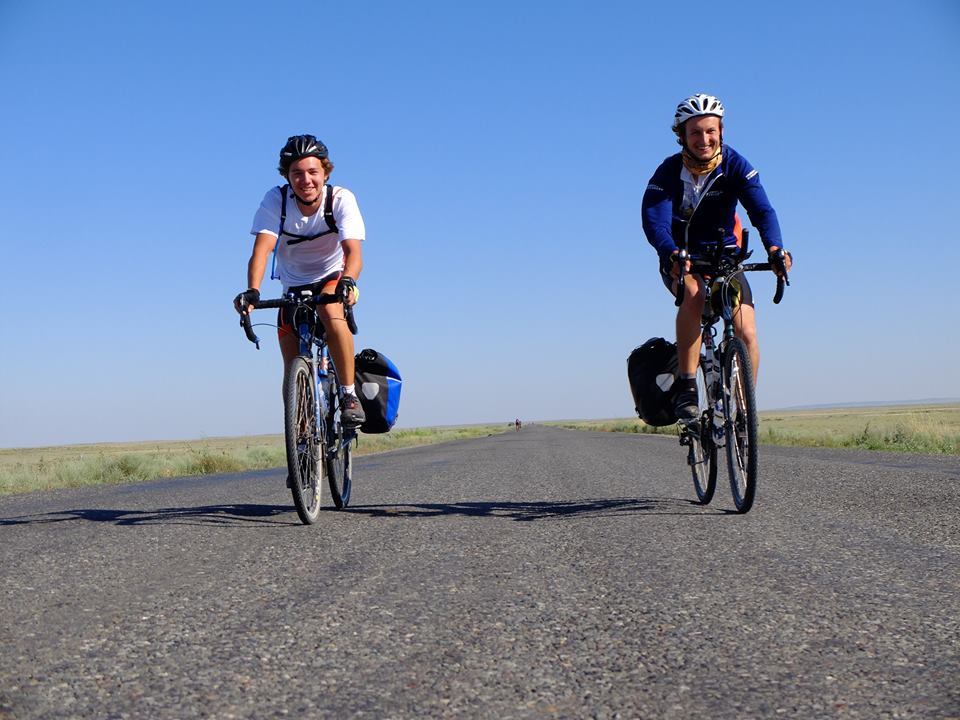 What were the highlights of the tour?

C: The Altai mountains in Russia are stunning and are one of the last great wildernesses on earth. Whilst everywhere was friendly Iran was by far the most hospitable. The level of kindness was just unbelievable. Several time a day we would have people offering us gifts and everyone would wave and take an interest. It is a wonderful place.

W: For me the Tian Shian and Pamir Mountains which cover Kyrgyzstan and Tajikistan were the most memorable places. We were up at over 2,500m (8,000+ft) for over 3 weeks where we had some punishing climbs on the bikes but we were rewarded but phenomenal views every time. When were in the Pamirs I hiked up a mountain we were camped next to up to 4,900m and that was great fun, and I even saw some wild mountain goats near the top.

Visas for Cycling in Iran

I have heard that there were some visa rule changes for UK and US citizens visiting Iran. When you were cycling in Iran, did you need ‘guides' to accompany you?

C: We did not need a guide physically cycling with us but we did need to be ‘with him' in a general sense. So when we finished for the day the guide would be there. The same was true in Turkmenistan as well but in both cases they were lovely people and it did not really affect what we wanted to do.

W: I would add that we arrived in Tehran on the 5th September, the day that British appointed their first ambassador to Iran since the embassy closed in 2011. As such I believe we should see improving relations with Iran, and hopefully it will become easier and cheaper for UK citizens to travel to Iran. However, we found Iran to be the friendliest country we visited.

Is there any advice you would give to people planning on cycling the Silk Road?

C: Bring plenty of water. It gets very hot especially in Uzbekistan. Here we had days were it was around 45 degrees and we were drinking close to 10 litres when on the bike. Also give yourself enough time for visas as it is a long and difficult process – I would suggest 3 months or more. Using cards, especially in Iran is difficult so make sure to have enough dollars on you. It is a challenging route in many respects so make sure you research what you going to be undertaking and make sure to train before had.

W: Tajikistan and Kyrgyzstan are a must, it is worth the suffering of cycling through them. I would also say that you'll find people to be friendlier and more welcoming than you could ever imagine. I've never experienced such unrelenting hospitality on such a wide-scale than cycling through Central Asia and Iran

What does the future hold?

C: As soon as I got back to the UK I had to rush off to university so not at the moment. I would be interested in undertaking further challenges be that by bicycle or another means. I am yet to fully digest this trip!

W: I've been told that University will be my next challenge/ adventure but I am certain that Beijing to Tehran won't be the last adventure I do.

Information on Cycling from Beijing to Tehran

Where can we find out more about your Beijing to Tehran bicycle touring trip?

We have a website set up at beijingtotehran.com where there are photos, blogs, donation links and route summaries and plenty of other details. If you can't find what you are looking for please send us an email at beijingtotehran@gmail.com and we are always happy to help. 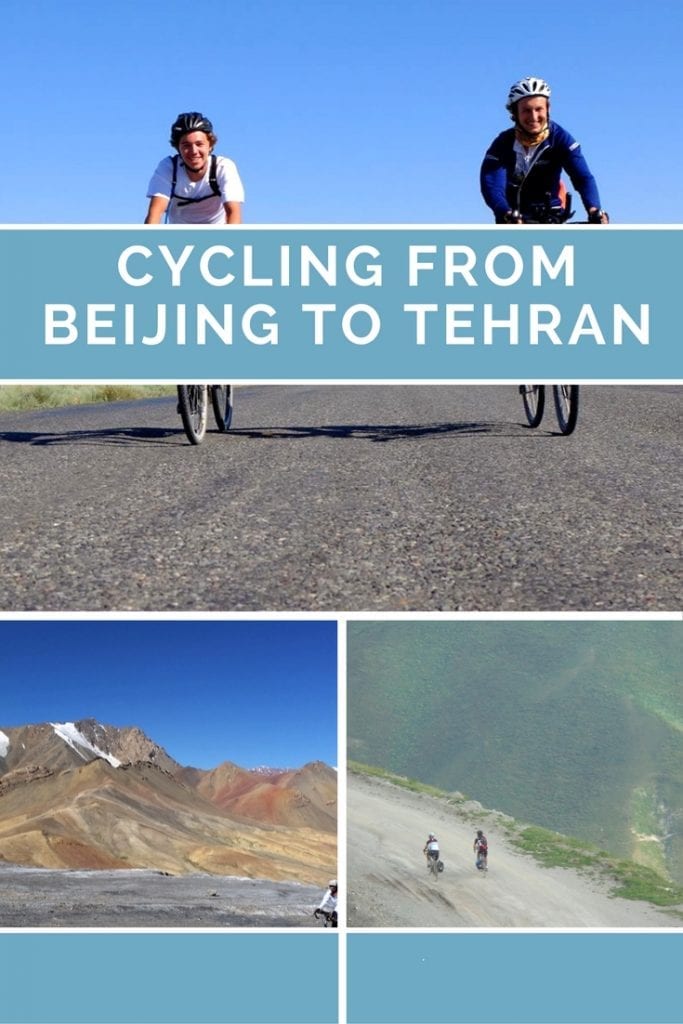