Last Updated On August 23, 2021 by Dave Briggs Leave a Comment

Back in 2004, I flew over to India from the UK to begin a one month journey around the country by train. This was back in the days before I was blogging. These notes are taken directly from my diaries, and then transferred to this India travel blog.

My first day in Delhi, India

The time is now 18.05, and here I am in New Delhi, India! What a strange old life. The journey here was quite long, but uneventful.

Getting through customs was a breeze, and I changed some money for my first Rupees in the airport. Then, I booked a pre-paid taxi, and told them where I wanted to go… The Yatri house on Punchkuin Road.

An introduction to India travel scams

That was when I was introduced to the first of no doubt many little scams in India. Despite the office saying that the driver knew where the hotel was, the driver said that he didn't, and needed to go to another office ask for directions.

Whilst I was there, one of the guys in this other office pretended to phone the hotel for directions, only to find out that the hotel was ‘suddenly booked out'. He then suggested another, cheaper hotel, where no doubt he would pocket some commission.

I stuck to my guns, told him the Yatri was where I wanted to go, and that he'd better take me there.

He obviously realised that (a) I knew what was going on and that (b) I was a lot bigger than him, because the driver took me there without any more hassle, although after dropping me off, he did have the cheek to ask for a tip.

I told him where to stick it and booked into the hotel, where lo and behold, my pre-reserved room was waiting for me. One-nil to Dave!

My hotel room in Delhi 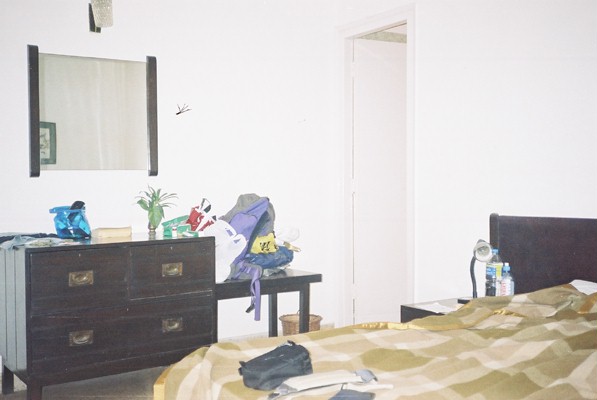 The hotel room was basic (goes without saying really), and reminded me of some of the hostels I'd stayed at in Spain.

The weather here is surprisingly chilly. 10-12 during the day, and half that at night. After booking in, I crashed out for a few hours, as I hadn't been near a bed for almost 48 hours. Woke up at four in the afternoon, and decided to go for a wander.

My first impressions of Delhi were noisy and dusty! Drivers don't use indicators, and instead use their horns to let people know they are changing lanes… Not that the lanes actually represent anything more than an amusing attempt to paint straight lines over a series of potholes. It took a couple of hours to realise what side of the road people were supposed to be driving on. There was some sort of Sikh festival happening, and that combined with jetlag was enough for me, so I headed back to the hotel, and had an early night. I had a full day ahead of me in Delhi the next day.