This last week in Greece has been one of the most important in its history. Will it leave the Euro or won't it? Whose fault is it? I am not going to go into the ins and outs of this though. There are many more, better informed people than me who can do that after all! Instead, I am going to give an account of my day to day observations made during the run up to the Greferendum. 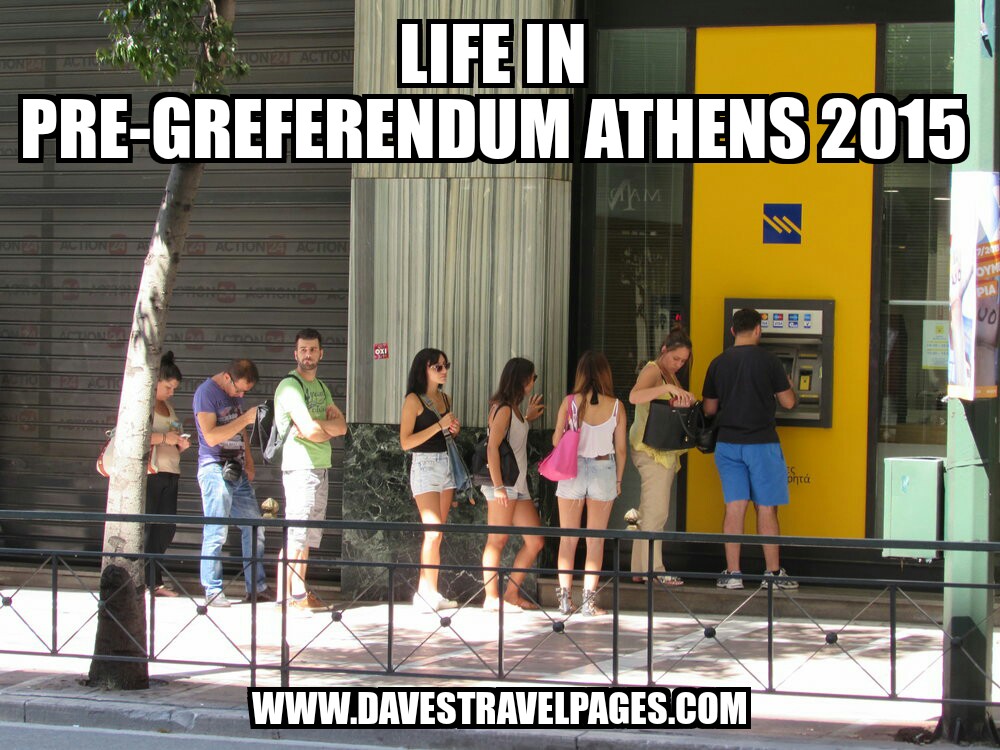 To be honest, the above picture sums up the reality of the last week. This is the image and the memory that will stay strongest with people.

Forget Syriza, Varoufakis, Tsipras, and whoever the credible opposition in Greece are (is there one?). Not being able to withdraw their own money from a bank is the memory that will stick.

So, I am fully aware that this is not the normal sort of travel blog post that I like to make, but, I am living a small part of history now.

This is as much for me to look back on later on in life and think ‘I was there', as it is for you to get an insight as to what life in Athens, Greece, was like before the referendum took place.

So, just to recap. The Greek government has been negotiating with the ‘troika' for a ‘better deal' for Greece since they were elected earlier during the year.

These negotiations ran on and on, and a couple of days before they were due to end, the Greek government called for a surprise referendum. (Hence the phrase #greferendum – Nice, right?!).

This referendum was based upon the bailout proposals as made by the Eurogroup. At this point, things turned a little bit unpredictable. To help prevent a run on the banks, capital controls were introduced. The capital controls looked like this –

1.All banks to be closed until 6 July (the day after the proposed date of the referendum). The banks were scheduled to reopen on Tuesday 7 July.

2. A 60 Euro per card per day limit was placed on ATM machines. This was to be capped until the 6th of July. This limit was subject to change by the finance minister.

3. Foreign bank cards were not affected by these rules. This meant that tourists could still get money out of the ATM's (assuming they had money in them). Again, this would be subject to change by the finance minister.

4. The Athens Stock Exchange also announced that it would close for one day at first. This was then extended until after the referendum.

5. Payments made on Greek registered credit and debit cards were allowed to continue as per normal.

6. Internet banking would also be ‘business as usual'.

7. Taking large amounts of currency out of the country either physically or electronically was also stopped until after the referendum.

Now, obviously, this was very serious news! How people would react, and what unforeseen problems might occur along the way was difficult to predict. SO, during this time, I decided to make day by day observations on my Facebook page – Dave's Travel Pages. Below, are the posts I made on a day by day basis. The first one was made on Monday 29th June 2015.

Life in pre-‪#‎Greferendum‬ Athens – From now until the referendum, I will put a post on towards the end of the day that sums up some of the things I have noticed. I'm going to keep this politics neutral – This is just a piece about my daily observations on a day by day basis.
Day 1
1. Not all ATM machines have money in them.
2. If you see an ATM without a queue, it probably has no money.
3. Greek bank account holders restricted to taking out only 60 euros per card per day.
4.There is a queue at every ATM, bigger before and after work hours.
5.Banks were closed.
6.Petrol stations/Gas stations were trying to avoid accepting bank cards, and would take cash only. (I suspect this is because they are too worried about getting some of that cash back from the bank again).
7.Supermarkets are busy, queues are long inside.
8.I would not say that people are panic buying. However, they are buying essentials that will last a long time – Toilet paper, tampax, beans, lentils, rice etc etc.
9. Randomly, I couldn't find anywhere that sold a banana yesterday or today (not sure if this is connected or not).
10. Some fresh fruits and vegetables running out/low at supermarkets.
And that's the end of today's observations. Please feel free to add your own in the comments below. Cheers!
‪#‎Greece‬ ‪#‎Athens‬ ‪#‎expat‬ ‪#‎expatathens‬ ‪#‎expatgreece‬

By the way – The lack of bananas resolved itself the next day! The government also announced during this time, that the metro and public transport system would be free until after the greferendum.

After that, copies of the proposed referendum paper were released. Below, I have included the Greek one (of course!), and a translated copy. 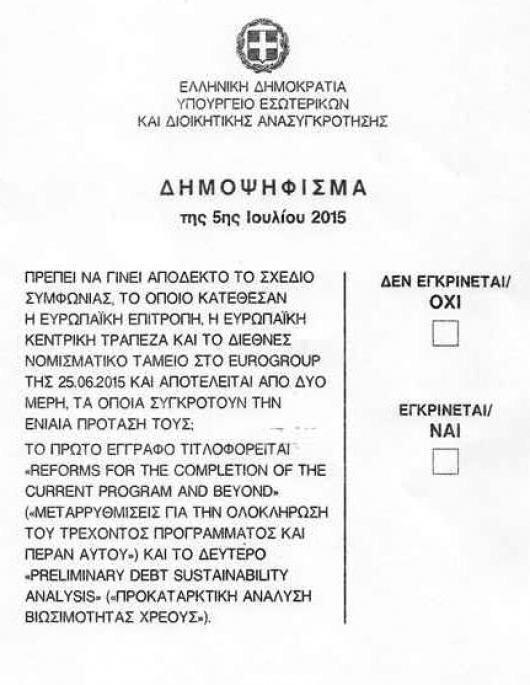 The next update I made on Tuesday 30th June 2015 was as follows.

Life in pre- ‪#‎Greferendum‬ Athens – Day 2
A bit of a late update, but hey, that's ‪#‎Greece‬ baby!
1. More than one Greek friend has commented that they went to withdraw their maximum 60 euros for the day, but the ATM only had 50 Euro notes.
2. Some supermarkets have long queues again.
3. People stocking up on their prescription medicines from pharmacies. (Some had run out/low on basic popular medicines).
4. The ‘quangos' attached to the public sector did get paid today!
5. Much quieter in the centre of Athens than usual (18.00 in Monastiraki) – This is subjective I know.
6. We went to an art exhibition in the centre, which has to finish its allotted run time early due to the government having to let the security staff go at the end of the month.
7. As we walked through the centre at night, an overheard conversation in Greek – “Let's get a drink now, because tomorrow we may have the drachma”
8. As we walked home, we smelled the lovely aroma of Koulouri baking. We went a bit closer to the bakery to get a better sniff, and the baker gave us two to take home for free. Sweet!
9. PS – The metro and public transport system in Athens is free now until the referendum.
That's all for today on my observations of day to day life in Athens on the run up to the referendum. See you tomorrow!
#Greece ‪#‎Athens‬ ‪#‎expat‬ ‪#‎expatathens‬ ‪#‎expatgreece‬ ‪#‎capitalcontrols‬ ‪#‎travel‬ ‪#‎lp‬ ‪#‎ttot‬ ‪#‎supportgreece‬ ‪#‎visitgreece‬

Overnight on the Tuesday, Greece then missed an essential  €1.6bn  payment to the IMF. The importance of this was made clear in the following statement by IMF spokesman Gerry Rice.

“We have informed our Executive Board that Greece is now in arrears and can only receive IMF financing once the arrears are cleared.”

Another major development overnight, was that the Greek government then announced that they would open around 1000 banks in order for pensioners to be able to cash their cheques and receive their pensions. (For some reason, a huge number of pensioners do not have ATM cards). There was also a limit placed on this though, which was set at just 120 Euros. As might be expected, the first thing that happened in the morning, was that thousands of pensioners descended on the banks that would be open. Organised chaos? Judge for yourself in the video below.

My Facebook Greferendum updates from this day were as follows.

Life in pre- ‪#‎Greferendum‬ Athens – Day 3
An earlier update than normal today
1. Today there were some incredible scenes of chaos as pensioners queued up at banks which were open especially for them. They could withdraw a max of 120 euros. Some were queued in alphabetical order, which i guess sucks if your name begins with ‘Z'. Note – According to the neighbour next door who is a pensioner, it depended on where your pension goes as to how much could be withdrawn. She could only get 60 euro out.
2. ATM's had queues again. People were calm in the queues.
3. In the supermarkets, there were not big queues, but people had very full trolleys of goods. There was less flour on the shelves than normal. (subjective view).
4. A couple of very funny Facebook events have sprung up… my favourite was the event entitled ‘The Ceremony of the Resurrection of Andreas Papandreou. Victor Frankenstein using his perfected methods will bring back to life the Nation's Saviour” – Check it out here! >>
https://www.facebook.com/events/419818838203998/
5. Obviously, everyday conversation at some point turns to what is happening, and the uncertainty of it all.
And that is all for today's observations. Tomorrow's should be a little more in-depth, as I am going to hit the streets for the day, and then hopefully catch a rally or two in the evening. Good night from Greece! xx
‪#‎Athens‬ ‪#‎expat‬ ‪#‎expatathens‬ ‪#‎expatgreece‬ ‪#‎capitalcontrols‬ ‪#‎travel‬ ‪#‎lp‬ ‪#‎ttot‬ ‪#‎supportgreece‬ ‪#‎visitgreece‬

On the Thursday, I went for a long walk around the centre of Athens. Everything was calm, everything peaceful. There was one small, but enthusiastic demonstration marching through, which had about 50 people.

To be honest, any capital city in the world probably has protest marches of some description every day of the week, so I didn't pay it much attention. Syntagma Square was busy though – busy with media setting themselves up. I think that Friday, and then Saturday will see the bigger rallies. 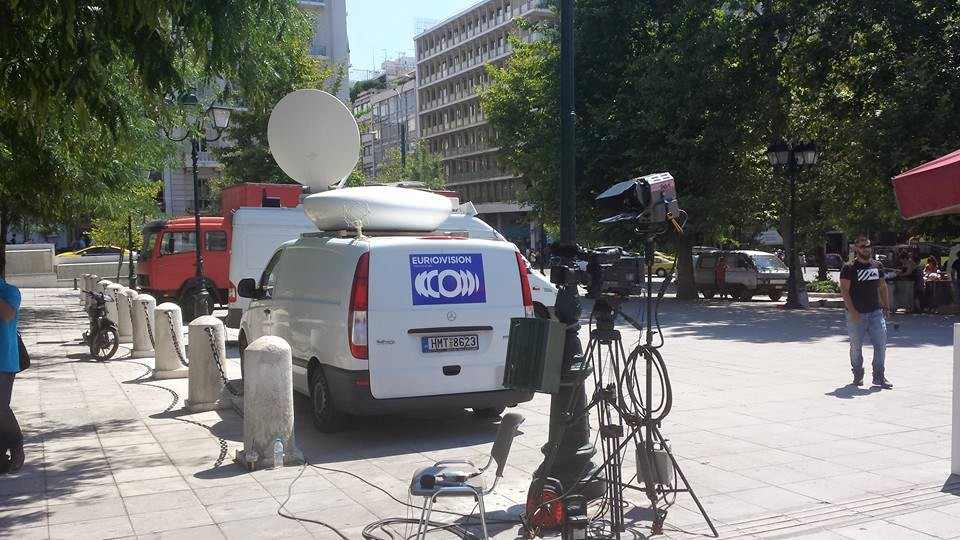 Life in pre- ‪#‎Greferendum‬ Athens – Day 4
A shorter post today. (After all, how many times can I say there are queues at the ATM's?!). Tomorrow though, there will be a full blog post about this week in Athens on my blog over at www.davestravelpages.com
So, here are some of the things I noticed today.
1. Vodafone and Cosmote (two mobile phone networks) gave some of their customers free minutes to be used until the referendum is held.
2. I found out that one ‘ethical' supernarket,Sklavenitis, paid their staff in cash so that they wouldn't need to queue up at ATM's to get their money out.
3. The ‘YES' campaign is very prominent on the TV. The ‘NO' campaign is very prominent on the streets.
4. There are absolutely NO signs of panic or social unrest. Don't let the media use of the word ‘turmoil' confuse you – that applies to the political situation, not the social one!
5. That said, several friends have mentioned that the atmosphere in office environments is a lot more tense these days, with many heated debates leading to arguments. (Greeks love heated debates anyway, but these are more so!).
6. There is a certain mix of anger, weariness, and sadness among Greek people that their country is in this situation.
7. The media has set up almost permanent camp in Syntagma Square in Athens. Judging by the amount of them, if some tourists had cancelled their trips to Athens, the media has easily balanced the numbers back out again!
And that's it for today folks. See you tomorrow! xx
‪#‎Athens‬ ‪#‎expat‬ ‪#‎expatathens‬ ‪#‎expatgreece‬ ‪#‎capitalcontrols‬ ‪#‎travel‬ ‪#‎lp‬ ‪#‎ttot‬ ‪#‎supportgreece‬ ‪#‎visitgreece‬ ‪#‎travelbloggersgreece‬ ‪#‎TBG‬ ‪#‎Greece‬

And here is where my Athens pre-Greferendum blog post ends. Why, when  there are still a few days to go until the referendum is held? The simple reason is, that on Friday 3rd July, I head out of Athens to the coast for a wedding which is on the Saturday. Life doesn't stop just because there is a political crisis! People still need to get married, see relatives, and even go shopping (if the banks will let them have their own money, that is).