Sometimes when you travel, it's the unplanned things which work out best. By my train being cancelled out of Jaisalmer the day before, it meant I had an extra day in the city to see the start of the Jaisalmer desert festival. Great!

I checked out of the hotel in Jaisalmer, but left my bag at the hotel during the day, as the bus wasn't due to leave until the evening. I would say that it worked out in my favour in the end, because I got to watch the beginning of the Jaisalmer festival. 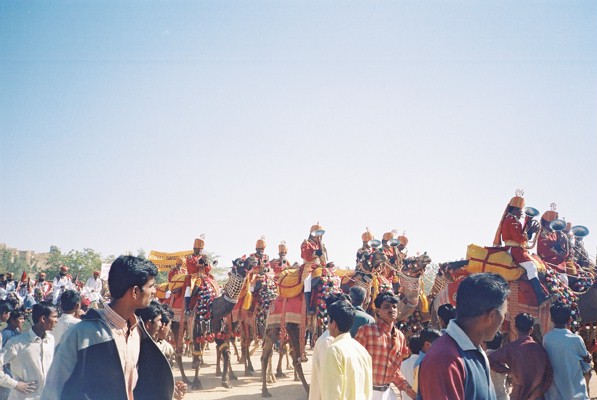 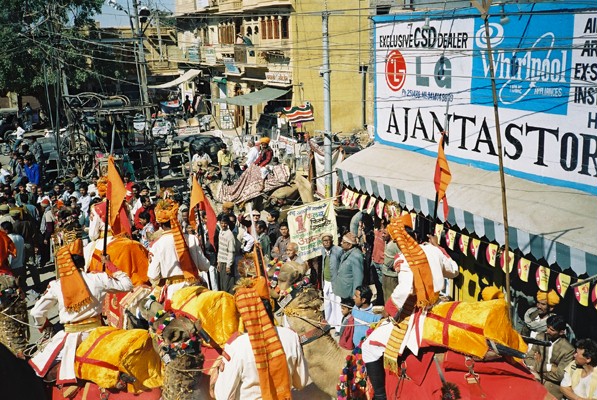 I watched the camels and their colourfully dressed riders march through the streets from the roof of a restaurant, which was pretty cool, and then I went over to the stadium where they were all assembled.

There was lots of displays, and although the festival lasted for several days, I had to catch a bus within a couple of hours of the official start. It was still good to see, hear and smell it all though!

I later learned the the Jaisalmer festival is an annual event held in February. I bet I'm the only person to have ever blogged about the Jaisalmer 2004 festival though!

Bus Journey from Jaisalmer to Jaipur

The bus journey to Jaipur was certainly not as comfortable as a train ride, and when I arrived at six in the morning, all I had the energy to do, was check into a hotel and veg. It was a waste of a day, because I was due to leave again on the Friday, but I was so shattered, it was definitely the right thing to do.

Next day of India travelogues – To Ranthambore