Love, Death and Greek Food – “OK Briggs, what's this blog post about then?” I hear you ask. The short, uninteresting version is this is what I got up to on Valentines Day. Honestly, the longer version is much more interesting. Well, maybe a little bit at any rate. But don't take my word for it, read on!!

It's Valentines Day, and in my book, nothing says love like a fried breakfast. I know, and they say romance is dead!! The only problem being, we had none of the required ingredients in the house. During some avid research into where to get a good cup of tea in Athens though, a cafe called To Tsai had been suggested. On investigating their website, it appeared that they did indeed have a good selection of teas, but then I noticed they also did a buffet  with bacon, eggs and sausages. A fried breakfast? Love that!

On the way to the cafe, I was excited for two reasons. Firstly, there's nothing quite like a plate of bacon and eggs, and secondly, I had an hilarious series of jokes to entertain the Mrs with, such as Greek sausages not being quite adequate enough when compared to English ones. Quality, tasteful gags, you understand. Of course, what I should have done was follow my own rules that I have devised when it comes to travelling, and on this occasion it should have been rule number 7 – Don't get your hopes up for an English breakfast outside of England.

The food was pretty much below average. Bacon you could see through, sloppy scrambled eggs, and tiny horrible sausages. Still, it did mean I got to crack my sausage joke after all. There was also a weird assortment of soup, salad, curry and noodles along with it. The cake selection was ok though.  Verdict on To Tsai? – A little bit pretentious, and it wouldn't hurt if the staff exercised their smile muscles once in a while. We had a good time all the same though. 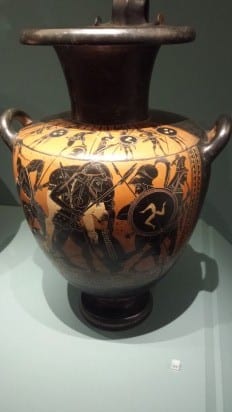 Moving on to the Death part of the day then. No, don't worry, nothing bad happened! The Cycladic Art Museum had been running an exhibition called Beyond – Death and Afterlife in Ancient Greece. This was to be its last weekend in Athens, and it was well worth visiting. A fascinatingly well put together collection depicted various burial rites, and the differing concepts of Hades. We spent a few hours in there checking out the displays, and its amazing to think that 2000 years ago, the systems of belief were arguably more complex than those of today.

And on to another part of the day, the Greek food. To be honest, this actually started out as just a trip to a deli in Monastiraki to get a beer, but as things tend to do in Greece, one thing led to another and it turned into something else. Soon, we were sitting down tasting beer, cheese, snacks and other products from throughout Greece. It's a newly opened place called Pantopoleion, and one of the partners is an  ex-tax lawyer who decided that he wanted to promote Greek gastronomy. He was certainly passionate about it, judging from how much he liked drinking the Tsipouro he kept in a small bottle in his pocket. (Tsipouro, by the way, is a type of Raki, and yes we did end up buying some as well!).

Greece should really find a way to promote its food and drink more, as it deserves to be a popular destination for foodies. I think half the problem when going into a deli like this though, is knowing what the products are, the history behind them, and how they should be used. At least, that's my point of view as an uncultured Englishman. Hopefully that will change over the coming months though, and as well as being able to bore people with which bicycle inner tube valve type is the best, I can bore people about Greek cheeses as well. Anyway, with the sounds of ‘The real Greece. The Real thing' ringing in our ears, we waved good-bye to a by now very drunk Greek ex-tax lawyer and headed back. A different sort of  Valentines Day, but one we won't forget.