Last Updated On March 27, 2019 by Dave Briggs Leave a Comment

Music has always been an important part of my life. From playing the clarinet and saxophone in school, I moved on to the bass guitar which I played in various bands. These are some of the bands that i've been in, listed in reverse order (ie, the most recent first). I would like to return to my music one day, perhaps when the travelling bug has left my system for good, (or maybe I should go on a world busking tour!?).  I can see myself in my mid forties playing in a ska or blues band, especially if someone can get around to inventing the pocket bass amplifier and speaker system!

Formed on my return from my first travels, this band was Banbury and Oxford based from 1998 through to 2000. We made several recordings, which I´m extremely proud of. Twilight is probably the best song that I have ever written, and Hunter Thompson is the best quality recording i´ve ever made. The band played several gigs, and disbanded due to my wish to travel, combined with the fact that i seemed to be doing everything. I played bass guitar, rhythm and lead guitar in Hunter Thompson, percussion and keyboard in Twilight, and check out my sax solo in Nothing Good!!! (Hey, if you've got a trumpet, blow it!!)

The Bush Pigs were formed in 1994 with original members Dave Briggs on bass, Tony Rislely on guitar and vocals, Kieran Mclaughlin on sax and windblower, and Steve Goddard on drums. The two songs which you can download were taken from our first cd single released in 1996, which holds the current world record for the fewest ever sold! I left the band to start my travels soon after the single was released, but they are still going , with Duncan replacing myself on bass, and my brother replacing the sax player with his keyboard. Hopefully the Bush Pigs will continue to go on for years to come, as my ‘pension’ of a free beer at every gig I turn up too comes in handy sometimes!! Check out their website at www.bushpigs.co.uk

The band was started in 1990 by Dave and Steve Briggs (bass and keyboards). After recruiting Gary Steers on drums, we hit the rehearsal studios whilst we looked for a guitarist, who eventually turned up as the incredibly gifted Gary McReadie. Concentrating on song writing, rehearsals and drinking, Paul Harradine joined us, and the band was complete.
The band made 2 cd's with this line-up, songs from which you can download from the list below. It's worth bearing in mind that these were recorded in 1991 and 1992, and that whilst the oldest member of the band (me!) was nineteen, the youngest, Gary on guitar, was only sixteen, and his incredible talent still shines through. 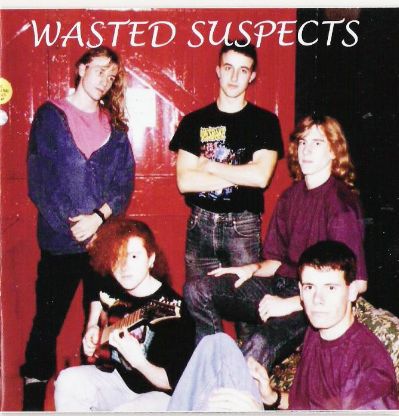 In late 1992 Paul Meadows replaced Paul Harradine on vocals, and although the band continued gigging,  no more recordings were made. The untimely death of guitarist Gary in 1995 finally put an end to Wasted Suspects, although a one off tribute gig saw the band reformed with both Pauls taking a set each, and Grant Sutherland taking the unenviable job of guitarist, which he did brilliantly. 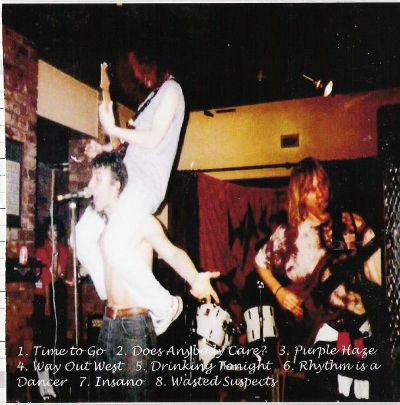 To everybody who was involved with Wasted Suspects, including parents who
ferried the gear around allowing the band to get pissed at every gig, a great group of mates who knew the words better than us, and anyone who remembers and bought a T-Shirt, thanks a lot, they were excellent times.

Wasted Suspects  –  Does Anyone Care?

And to give you an idea of my musical tastes, here's some bands I wasn't in, but love listening to.