Last Updated On April 11, 2020 by Dave Briggs Leave a Comment

Up early (ish), and tucked into the included breakfast. I am not sure at what point custard filled croissants became part of the Sicilian diet, but it sits ok with me! With that out of the way, it was on to the days list. First one, was to go back to the Piazza Domenico to take a few photos whilst it was quieter. Palermo seems to be dotted by these little squares, most accompanied by a church or two.

From the Piazza Domenico, it was on to see the Teatro Massimo, which is listed as one of the major attractions in Palermo. Whilst it is an interesting and somewhat grandiose building, I would have to say that it would not be worth especially visiting Palermo just to see it! Still, it was worth a photo or two. 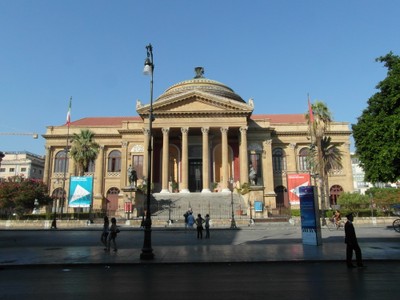 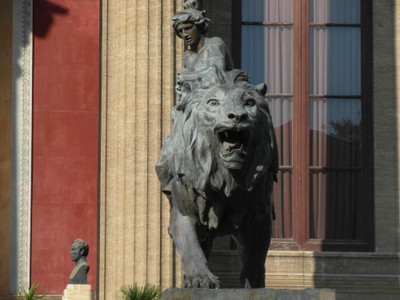 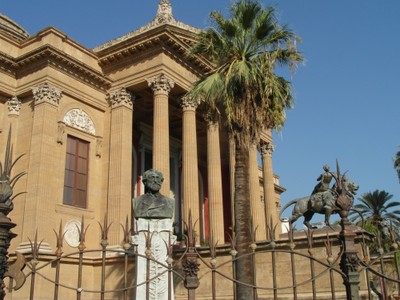 With some time to kill before an internet cafe opened, I went to a cafe for an expresso. The aim of an expresso, so far as i can tell, is to be the most potent, caffeine laced bitter tasting drink possible, using the smallest volume of liquid. The seemingly single mouthful of drink took me nearly ten minutes to get down, it was that strong!

Onto an internet cafe, where I confirmed my flight home. I have to admit to being a little concerned, as the only available flights for the following two weeks were demanding 500 euros a ticket… Luckily mine was still there though!

Next on the sight seeing tour was the Piazza Pretoria, which is just off of the Quattro Conti. It features a fountain which has many nude statues, which seems at odds to the church which it is opposite. 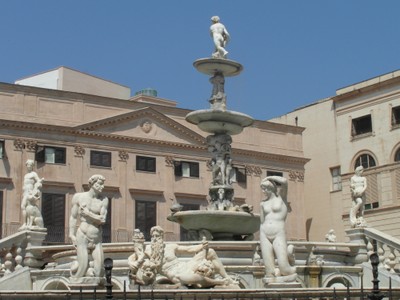 The buildings surrounding the fountain are undergoing some form of restoration (which indeed many buildings are in Palermo, all at European Union expense – Have they not heard that there is a Euro crisis??). The shutters on these buildings are often daubed with anti capitalist slogans (cant figure that one out considering as this money is free to them, and we and the Germans are probably paying for it). Eat The Rich seems to be a popular slogan here, and reminds me of a Comic Strip film by the same name. 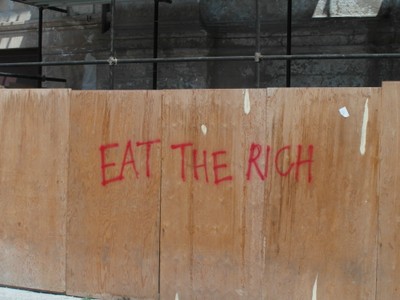 The Quattro Conti itself is something of a major junction in this historic section of Palermo. The buildings on all four corners feature statues and carvings, and the horse and carriage units wait along this section for tourists, as they do in other areas throughout Palermo. 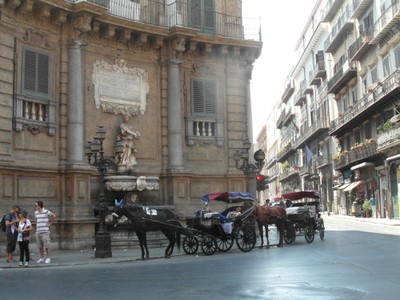