Last Updated On June 12, 2020 by Dave Briggs Leave a Comment

A day spent my the seaside at Puri in India! Puri is famous for its beach and also the temples in the surrounding area. You can take a day trip to Konark from Puri, as well as just chilling out at Puri beach.

Another interesting night on the train! Surrounded by the sterio-typical lower-middle class Indian family with annoying small child and four suitcases each!

However, as it had been a long day, I managed to get a good nights sleep, despite being directly under the air conditioning unit.

I arrived at Puri, and met up again with a Cuban, Pole and Spaniard whom I had been talking to the previous night in the station. We decided to share a couple of rickshaws between us, and had a look at a couple of guesthouses.

Some were a bit naff, so I settled on the Hotel Derby, which was a bit more expensive than the others, but did have cable TV.

As it was the morning when I checked in, I had breakfast up on the veranda in the beautifully warm sun and ate breakfast looking out onto the ocean, wondering where it all went wrong! 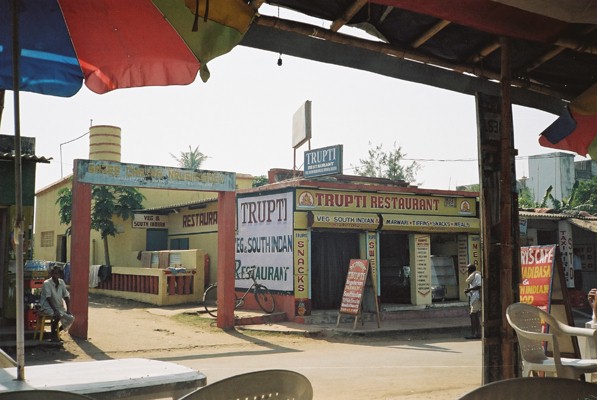 I went out onto the beach, which was reasonable with lots of fishing vessels. It was a lovely day, and after a wander along the sand, it was obviously time for another meal, so I had a veg curry in one of the cafes and watched the world go by.

I think that the western travellers are just as interesting to look at as the inhabitants of Puri. Well over fifty percent of them fell into the ‘alternative, trying to find myself' category.

Then you had the ageing hippy trying to relive their youth brigade. There are always a couple of Japanese tourists of course, and also one Western Hare Krishna, who judging by the looks the locals were giving him, was considered a bit odd by more people than just me.

I got a bicycle rickshaw into the centre of Puri, where I walked around a temple and took a few photos.

I booked an autorickshaw to take me to Konark the Sun Temple the following day, and had an early night in front of the TV. Saw a very large rat wander around my room. Marvellous stuff.