Last Updated On February 17, 2020 by Dave Briggs Leave a Comment

Delhi is a huge city, and of course it's impossible to see it all within 24 hours! This then, is an account of my Delhi sightseeing itinerary which I think takes in some of the main highlights of Delhi. If you're planning a trip to India, perhaps this can act as a useful guide to things to see in 24 hours in Delhi if you are also tight for time.

Had a bit of an on-off sleep through the night, but not too bad. I got talking to the Aussie couple again in the morning, and they said they were having a bad time coping. This is one of those countries where you've just got to go with the flow of the chaos of it all, I think, and there is no point in trying to fit in with the local population. You've just got to take things as they come, and accept that whatever you do, the locals will always look at you as a tourist. Here's a great post about things you should keep in mind when visiting Delhi.

Things to see in Delhi

Anyway, I met my driver Raj outside, who was warming his hands over one of the thousands of tiny fires that the people here seem to love lighting at the slightest whim from any rubbish laying around.

He was a nice enough guy, and first of all, he took me to the Birla temple. Very picturesque. Next, was India gate, but the photo didn't turn out too well, what with all the smog and pollution hanging in the air. Next was the railway museum, which was a bit of a disappointment, but a did manage to get a photo of this sign! (see the selection below). 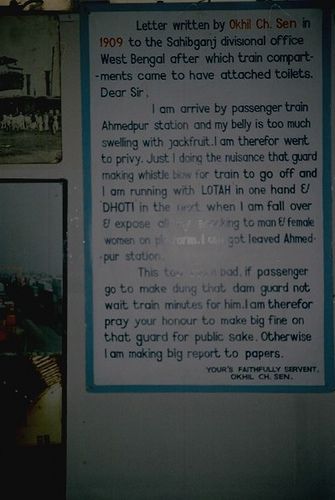 We then went to Qutb Minar, which I've always wanted to visit because of it's two thousand + year old iron pillar which shows no sign of rust. The best part of the complex, was the Qutb Minar itself, a huge tower undergoing some repair work, which is probably just as well, as it's about as straight as the leaning tower of Pisa! 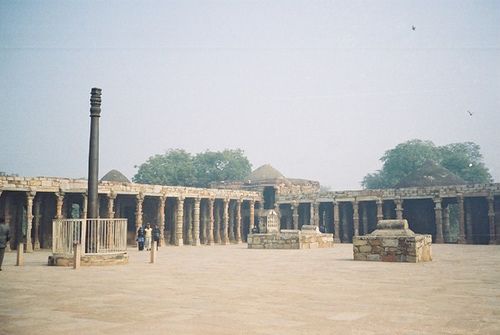 Next stop was the Bahai Temple, in the shape of a lotus flower, which was very peaceful. In such a frantic city, the quietness is a very stark contrast. Next was Humayuns tomb, which i felt was the best monument of the day. Again, and oasis of peace, it is a pre-cursor to the Taj Mahal, and very photogenic. Spent a while wandering around and looking at the chipmunks, who were trying to avoid getting eaten by the eagles (or hawks, wasn't really sure).

Finally, I visited the Red Fort in Old Delhi which was extremely impressive and overpowering from the outside, but a bit rubbish from within. Spent a while in there, (saw a monkey or two!) before jumping onto a bicycle rickshaw for an unforgettable ride through Chandi Chowk, which is another bazaar. To say that it was crowded is the understatement of the year!