Last updated on February 13, 2019 By Dave Briggs Leave a Comment

First of all, let me start this by saying that i have never named any bike that I own. I mean, that's for crazy people that get attached to things, right? Well, it seems that I have succumbed to the awesome beauty that is my new expedition bike, and I have indeed come up with a name for it! The name is not something that I had to sit down and thing about – It came subconsciously, bubbling to the surface where it finally stuck. Only afterwards did I have a deeper think as to why that happened, and why the bike is now named… (sorry, you will have to wait a little bit longer – Read the damned article!)
All bikes are girls. I don't know why this is, they just are. Of course, I have no problem in being corrected by the thousands of women adventure cyclists biking around the world on “Normans” or “Geralds”, but somehow I just don't think this will be the case. Female names are nicer, smoother and in my opinion sexier, which is good, because my new expedition bike is sexy! My bike is also yellow… If only there was a sexy woman that wore yellow?

Well, Uma Thurman did in Kill Bill. And she had a sword, which made her double sexy. Now, before you get excited and think that I called my bike Uma, take a little breather. She's not called Uma, but the link is there all the same, although I only realised the connection after the event.
From there, the next reason that i thought i named my new expedition bike the name it now has, was due to Buffy the Vampire Slayer. A bit of a leap you might think, whilst others may believe that I have an affection for girls that can kick ass (I do!), but again the link is there if you know where to look.

(Buffy photos with her wearing yellow are as rare as rocking horse do-dah. Hope you appreciate the extra effort i put into finding this!)
And finally, for anyone that hasn't already guessed, we have the final link. Now, anybody that thinks of the word yellow must at some point think of a certain bumbling insect that buzzes around in the summer, pollinating flowers and making honey. Alternatively, like me, you think of a Transformer.

This is Bumblebee for the uninitiated!
And so, the clues start to come together.
Uma Thurman's character in Kill Bill was known as Beatrix Kiddo.
Faith called Buffy – B
A Bumblebee is a… bee!
So, I am proud to announce that my new expedition bike is called Bea. She is yellow, she is beautiful, and she is mine! 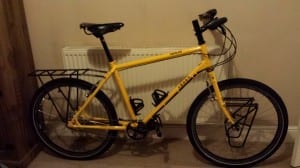