Last Updated On March 27, 2019 by Dave Briggs Leave a Comment

I often review bits of tech gear on Daves Travel Pages that I find useful, and so here we have a bluetooth keyboard review on the Periboard-805, which I purchased through Amazon. (I have included a link in this review to the Amazon site, and should you wish to buy one, I will receive a small commission which helps keep this travel blog running). 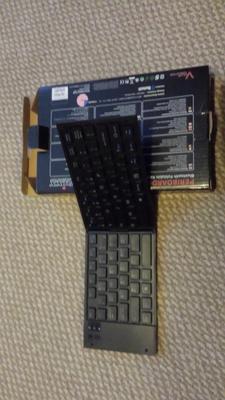 The reason for buying it, was that instead of taking a laptop with me to the TBEX Dublin 2013 conference, I wanted to take a tablet computer in order to save weight and space in my hand luggage. The problem was, that whilst a tablet computer might be ok to type on from time to time, it's not that great if you are trying to write longer articles and blog posts – hence the need for a bluetooth keyboard.


There are probably as many different bluetooth keyboards on the market as there are tablet computers for them to pair with, and so choosing one was no easy matter. My requisites for a bluetooth keyboard were that it had to be small, ideally foldable, have decent keys rather than rubberised ones, and could hold a charge for a decent amount of time. This helped me to narrow the field down to the Periboard-805 which Amazon were selling at £24.99.

The Periboard-805 says that is designed in Germany, but as with almost everything nowadays, it is made in China! That's not necessarily a bad thing of course, and after taking it out of the box, it certainly has a robust feel to it in its folded state. Unfolding it revealed a solid middle hinge, with two other hinged pieces top and bottom. It's probably not the sort of thing that you should give small children to play with, but its more than strong enough for users with an average consideration for the gear they have.

On the reverse side of the Periboard-805 bluetooth keyboard are four rubber corners, which are weirdly on the left hand segment of the fold only, not the right hand. In my opinion, this was probably a manufacturing error, as the cutouts are clearly there for the right hand segment also. Regardless of this, it means that the keyboard won't slide when it is on a smooth surface.

The Periboard-805 has a lithium ion battery (non accessible) which charges with a micro-USB cable. This is quite handy for me, as a lot of my gear uses the same leads, and means that when I am travelling, I don't need to take multiple chargers. Plugging it in made a red light come on, which went off in just over an hour. Although it would have been nice to have a green light to say that the keyboard was charged, or even on, the Periboard-805 doesn't have this feature (possibly to save battery drainage?). It's a little bit annoying as when switching the keyboard off, you never know if it is “really” off or not. Once the Periboard-805 bluetooth keyboard was charged, it was then time to pair it up with a device. The first device that I had to hand, was my Samsung Galaxy S4, and so I first switched the bluetooth on there, and then on the keyboard itelf, which made a blue light come on. Within a few seconds both devices had recognised each other, and accepting, it was then paired. Note – Some devices may require a code to be input which is generated from he device not from the keyboard.

After the bluetooth keyboard was paired, it worked straight away without any lag or hassles. Initially, i found the split space bar on the keyboard to be quite irritating, as was the fact that I kept hitting the caps lock key. With time though, I soon got used to it, and it performs the ob i bought it for.


Overall, I would give the Periboard-805 in this bluetooth keyboard review an 8/10. If they could sort out the on off lights, and even up the split keyboard it would get a straight 10. It looks like it might be a nice addition to my tech gear when I leave on my next cycling expedition around the world in 2015, but overall, I think a laptop is still better to work on, especially when it comes to photos and writing for hours on end. If you are interested in buying it, please use the link below.