Today's destination on the bike tour from Alaska to Argentina was Meziadin Junction in Canada. A bikepacking blog post from the Pan American Highway.

A big breakfast at Bell 2

It felt like I had been on an eating marathon for the whole day… marvelous.

The day started well, when I taught the Bell 2 breakfast buffet a lesson. An hour and a quarter spent eating may seem slightly excessive to some people, as may five helpings of breakfast, but it certainly felt good!

After a huge breakfast with five helpings from the buffet, I then cycled from Bell 2 and on to Meziadin Junction in Canada.

Somehow, I even managed to start cycling a half hour earlier, and just before I did, I asked one of the girls what the road to Meziadin Junction was like. ‘Mostly downhill' she replied. So, mentally geared up for a day of grinding hill work, I set off.

Within an hour, I had seen my next bear, although it appeared to be very lazy, just sunning itself on the side of the road.

On closer inspection, however, it appeared that it's laziness was due more to being hit by a truck, and so I could safely cycle past.

For the morbidly curious, (which must include myself I guess), I took a couple of photos. Amazing how the crows go for the eyes first. 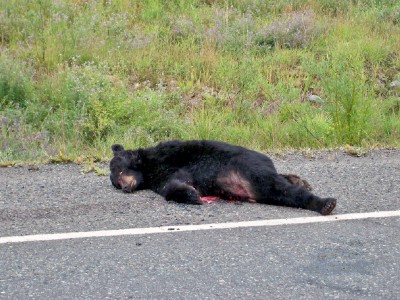 So, the first hour was uphill, although only slightly, and most of the day passed easily with me stopping every hour or so to eat more.

The last 30 kms from Bell River Crossing (one) were a little more challenging, and took a long, sweaty time to complete in comparison to the other sections.

There was nothing at Meziadin Junction itself, apart from a few burned out buildings for sale, and so I carried on to the Meziadin Lake campground.

It looked absolutely stunning, because in a change of form, the sun had decided to put in a celebrity appearance.

Unfortunately, my charms from the previous state campground were not carried over to this one, and I had to pay the full fifteen dollars.

So, another 100 km day done, and I needed to get up and into action earlier the next day if I was to pull of the 155 kms to Kitwanga in one hit.