Having noticed I had cracked bicycle wheel rims, I took a day off in Huanuco, Peru in order to get a new wheel.  Here's my blog post from the day.

Well, with the front wheel on the verge of a total existence failure, I had to do something about it. On Saturday, I had found a little cluster of bicycle shops, and settled on one in particular, and so returned there today. 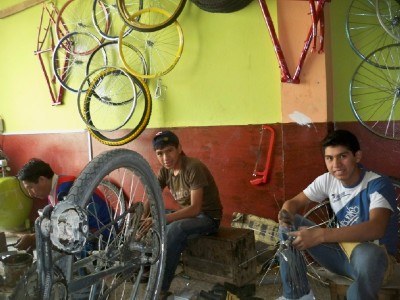 All manner of spare parts are available in Peru, however the quality is not really up to long distance touring standards. Fortunately, I was touring with 26 inch wheels, so there were plenty of options for me.

In an ideal world (ie, I have some sort of bicycle sponsor, or spare parts sponsor) I would ask for a replacement rim to be sent out to me. That's not the case, however, and so I have to make do with what is available locally… In this case a 3 pounds / 5 dollar / 15 soles rim.

It looked solid enough, and with my hub and spokes, the guys at the shop made a good job of building a front wheel for me.

I have about 4 months of cycling left on this trip, and so its fingers crossed that the rim will be good enough to last the trip. I will not really know how good it is until I have put a few days of cycling in, but I took it for a spin around the city of Huanuco, and everything seems fine.

I have about three weeks of cycling, some on dirt roads, to get to Cusco. I figure that if it starts to look weak once there, I can hopefully source something a little better.

That said, the 2 dollar gear shifter I bought in Mexico is still operational, so who knows, hopefully the rim will be the same!

The rim, wheel building, four new brakes and rear wheel hub adjusting came to 26 soles – about 6 pounds or 9 dollars. Keep the change from 30 soles fellas, and have a beer!