My time cycling in Ecuador was drawing to a close, and this day's ride between Loja and Vilcabamba would be one of my last in the country. 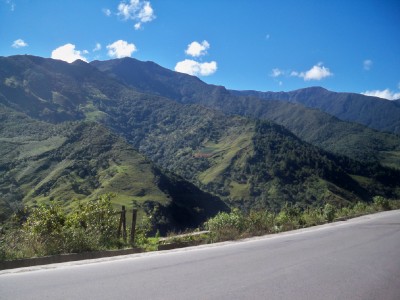 Cycling out of Loja

Exiting Loja was nice and easy, and once out of the city and onto the decent paved road, traffic was minimal.

The first hour of uphill work soon showed that I hadn’t recovered completely from the cold I had had for a few days, as I coughed up some interesting coloured phlegm along the way.

In fact, I don’t think that I have produced tones and textures like that since my 20 Marlboro Red a day era. At least my nose wasn’t dripping as it had been the previous couple of days though.

As I peaked somewhere up near the entrance to the Podocarpus National Park, an hour long downhill descent began, which offered some great views due to the clear blue.

The downhill section finished at the village of Malacatos, which seemed like a really laid back place, an had an outstanding church in the middle. 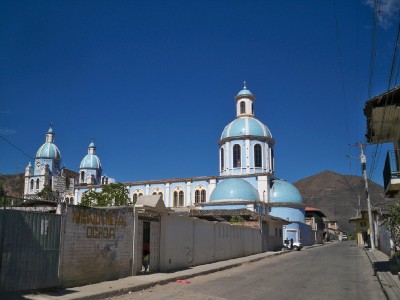 An uphill section of 6 or 7 km began once more which led up to my destination, the village of Vilcabamba.

Vilcabamba is famous throughout Ecuador as allegedly having more long lived people than anywhere else, something that is attributed to either the water or the quiet pace of life.

To me, it stands out more as a place where there are remarkably few Ecuadorians in comparison to the western tourists. Still, it is a quiet place, and Hotel Valle Sagrado is a good find at 5 dollars for a basic room with shared shower and use of a kitchen.

There are a few too many lentil loving, tree hugging new age hippy types for my liking, but one can’t have everything !

As I am still not 100%, I am taking tomorrow off as another rest day. Although its frustrating the hell out of me, I realise it's kind of dumb to set off on a difficult section whilst I am feeling like a bag of bollocks, so once the sore throat, headache and general lethargy has gone, I’ll hit the road again.