Last Updated On November 6, 2022 by Dave Briggs Leave a Comment

This travel guide to Pristina, Kosovo is a useful read before visiting the city. Includes Pristina tourism info such as where to stay, where to go and what to see.

Pristina, the capital city of Kosovo, might not seem an obvious tourist destination at first. For anyone wanting to learn more about recent Balkans history though, visiting Pristina is an interesting, and essential experience.

If you are planning a trip to Kosovo, this short Pristina tourism guide should help.

I visited Pristina in Kosovo as part of a mini-Balkans adventure in winter. Probably not the smartest time of year to visit Prishtine as it was covered in snow, but I never said I was clever! 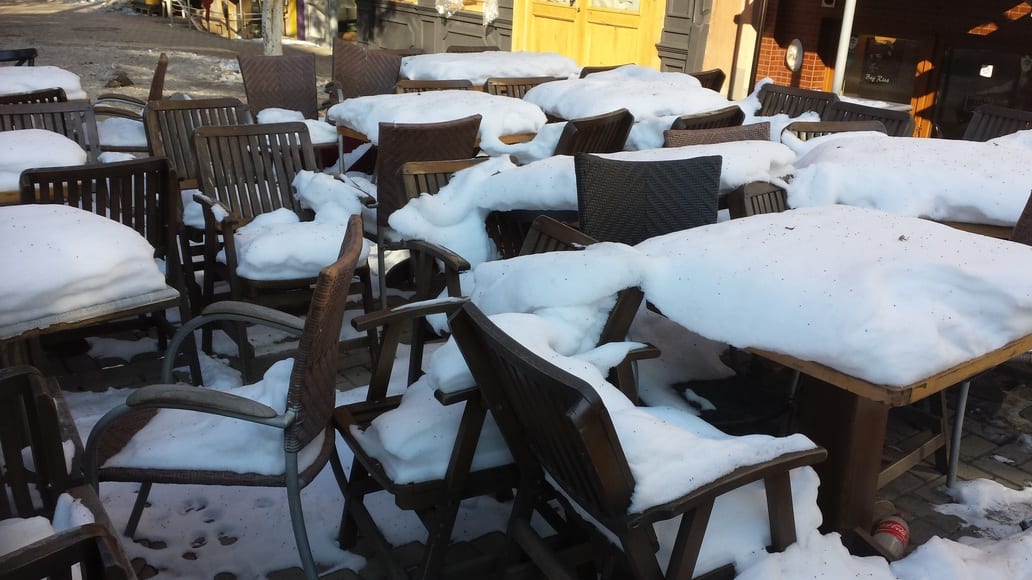 All the same, I found Prishtina to be a very easy city to get around, and it is quite possible to see all the major attractions there within a couple of days. You can check out my guide here on things to do in Pristina Kosovo for sightseeing itinerary suggestion. 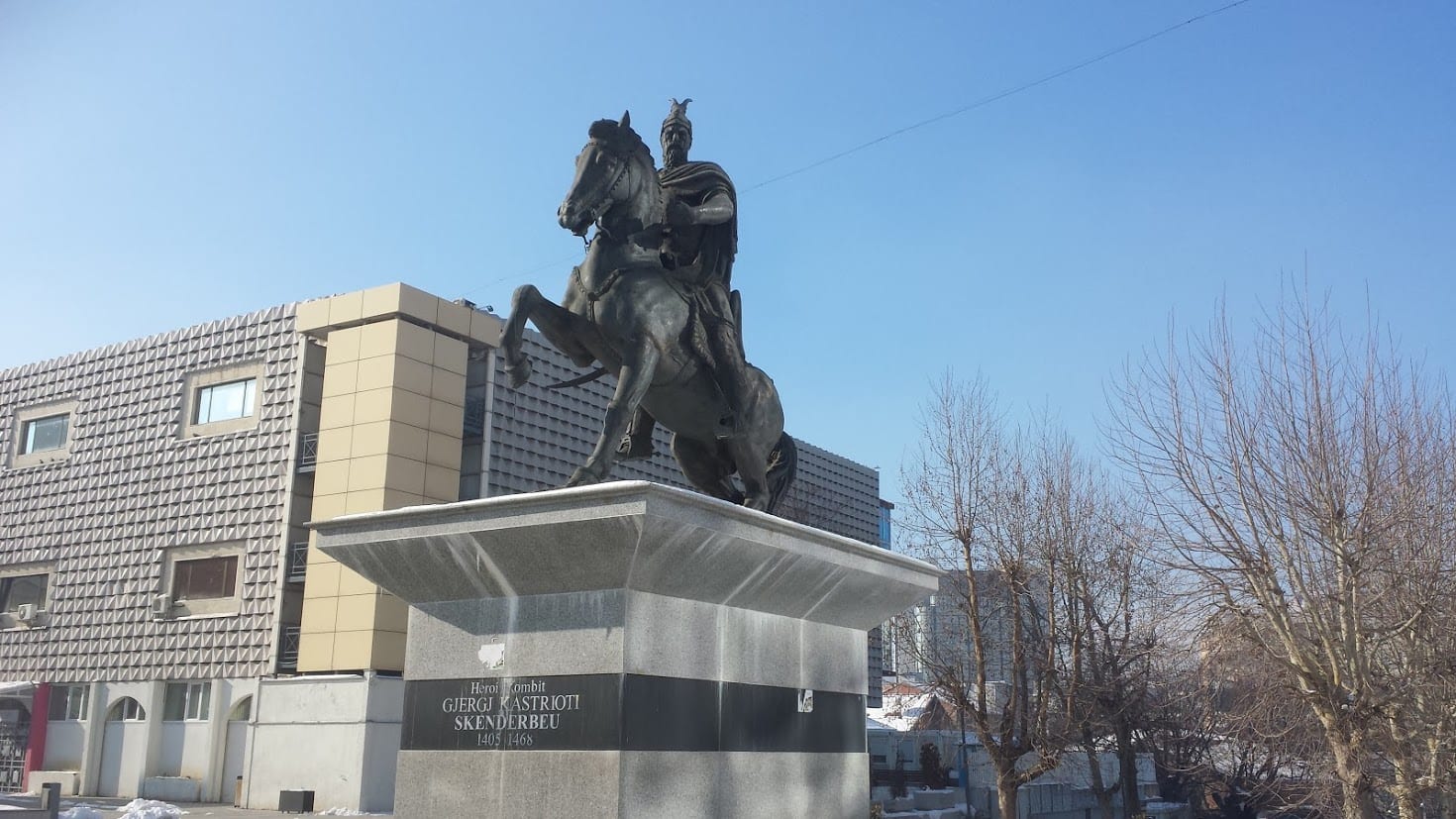 Pristina, (Prishtina / Prishtinë), is the capital of the Republic of Kosovo. The city is located in the north-east of Kosovo,and has a population of around 200,000 people.

Is Kosovo a country?

When to visit Pristina

May is perhaps the best time of the year to travel to Pristina. The cold chill of winter has faded to give way to pleasant spring temperatures which are ideal for walking around the city center sightseeing.

I visited Pristina in Kosovo as part of a mini-Balkans tour during the quite chilly months of January and February. If Pristina tourism is quiet during the summer, take my word for it, even fewer people visit during the winter months!

Freezing cold temperatures, ice, and snow are a common feature. During my stay in Pristina, it was -20 on the coldest day. Brrrrr! 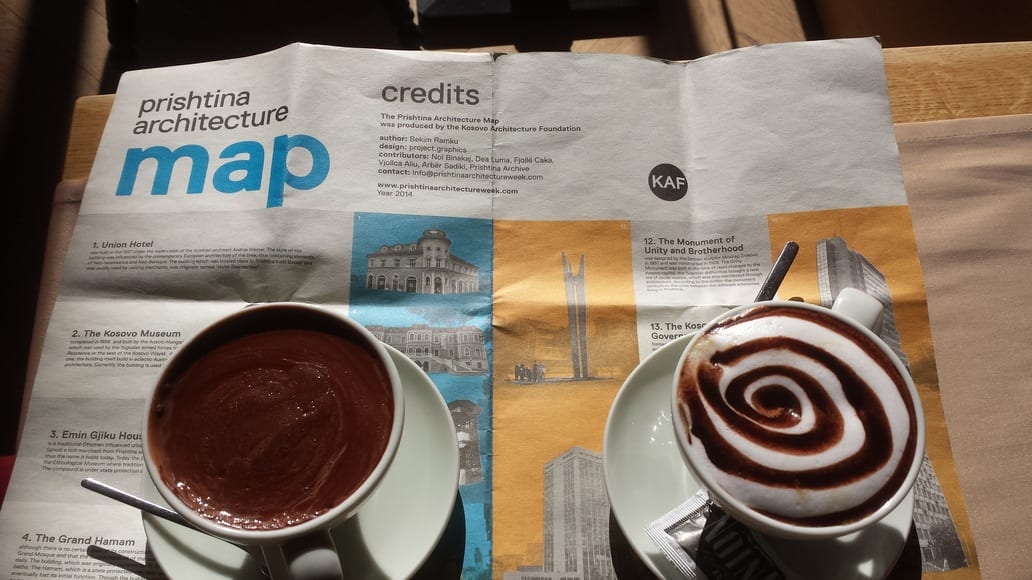 How to get to Pristina

You can travel into Pristina by either plane, train, or auto-mobile! Pristina is well connected to its neighbouring countries, and also has an international airport with flights to many European cities.

Note: Travel restrictions to and from Serbia change from time to time. It is best to find the current information before planning out your trip. 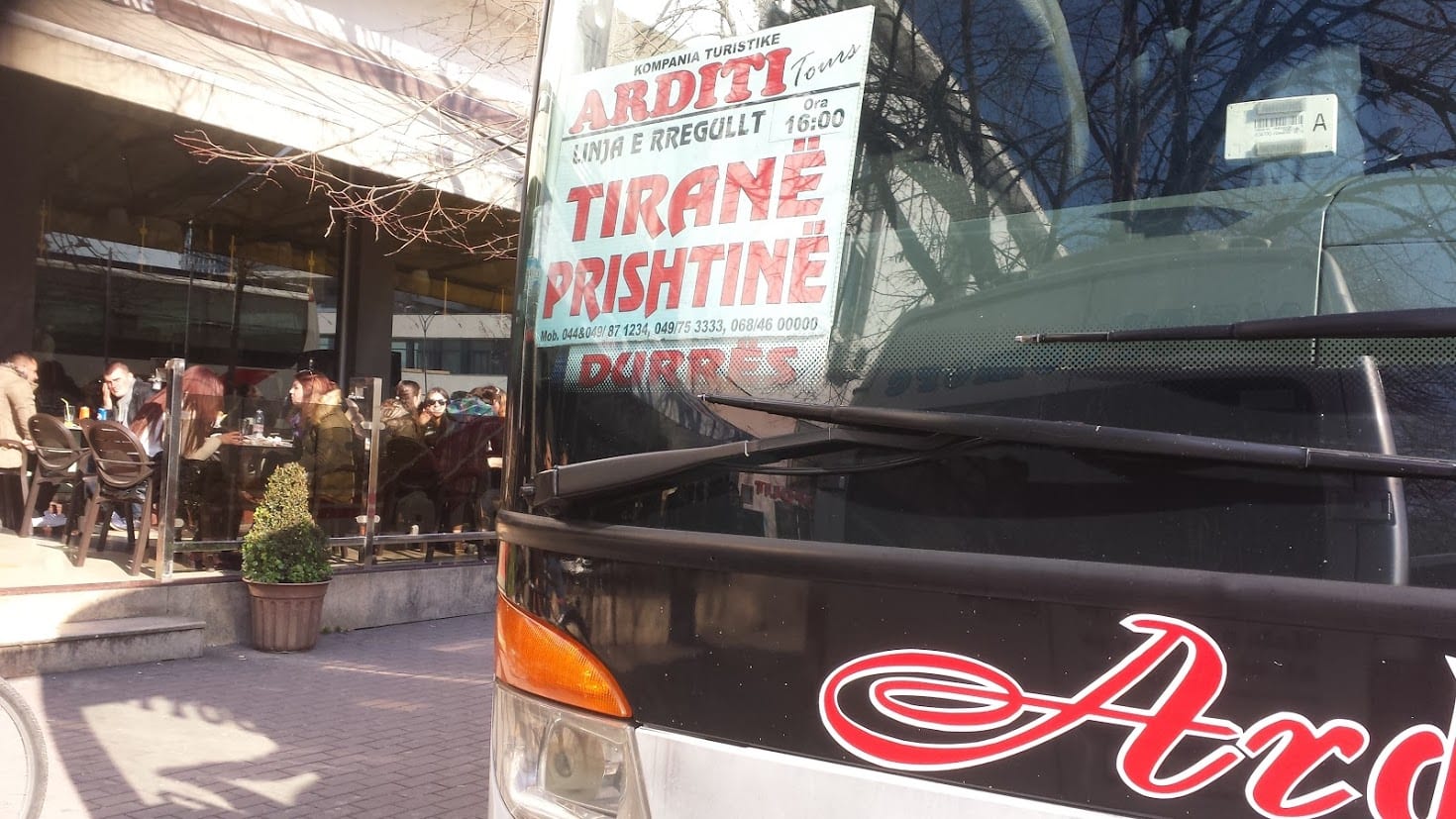 Pristina International Airport connects with dozens of European cities, including London, Gothenburg, Vienna, Istanbul, Oslo, and many, many more. These are served by a collection of budget airlines and national carriers alike, such as Wizzair, Turkish Airlines, Pegasus, EasyJet and Air Berlin.

Note: Some people find that Skopje has more air connections than Pristina. It's worth checking flights into Skopje, as it may work out better. The bus journey from Skopje to Pristina would then take between 1-2 hours.

How far is Pristina Airport (PRN-Pristina Intl.) from central Pristina?

It's about 14 kms (9 miles) from Pristina Airport (PRN-Pristina Intl.) to Pristina city center. Bus line 1A, operated by TrafikuUrban, runs every hour to and from the airport. Travel time to the centre of Pristina is approximately 40 minutes. The bus does not run between 21:00 hours and 03:00 hours.

Traveling to Pristina by Bus

I travelled through the Balkans on a bus, arriving from Albania, and departing to Macedonia (FYROM).

New roads have been recently constructed, and in fact, it is now quicker to travel from Tirana in Albania to Skopje in Macedonia (FYROM) via Pristina, than go on a more direct route!

The bus ticket from Tirana in Albania to Pristina in Kosovo was just 10 Euros. It cost even less catching the bus from Pristina to Skopje! There are dozens of other bus routes connecting Pristina with other Balkan countries such as Montenegro, Bosnia, and Macedonia cheaply.

You can get buses to Serbia, but they are more reliable from Serbian enclaves such as Gračanica and North Mitrovica. Pristina is also connected to other towns such as Mitrovica, Peja and Prizren in Kosovo by buses and minivans.

I didn't experience the train system for myself. By all accounts, the train journey times from Serbia and Macedonia are much longer than travelling by bus.

The connections are all there for Pristina tourism to develop in leaps and bounds over the next few years. It's likely that the destination will increase in popularity.

Where to Stay in Pristina

We found accommodation to be quite expensive in Pristina when compared to other Balkan countries.

This may have been due to the time of year, with less accommodation being available in the winter months. It might also have something to do with the huge number of NGO's operating in Pristina and the rest of Kosovo, bumping up the prices.

The Pristina tourism industry is really just in its infancy. Still, we managed to find a 35 euro a night apartment in Pristina which was great value for money.

We also stayed in a 5 star hotel when the electricity failed in that same apartment, and we were swapped to it free of charge! In short, there is accommodation to suit every budget in Pristina, including a couple of Backpacker style places. Hostel Han is a popular choice with budget travelers.

What can I expect in Pristina?

You can expect a city in transition. Its recently renovated pedestrian boulevard is lined with shops selling all the latest consumer goods. New roads are being built. Infrastructure developed.

The past is present though (if you forgive the pun!). Ottoman-era architecture sits next to dilapidated communist buildings, whilst opposite, a brand new steel and glass building is being built. The people are friendly and welcoming, and it feels safe.

The main language in Pristina is Albanian, although in the centre, you can always find a local that speaks tourist English. My overall impression, is of a country which is trying to put the problems and memories of the war behind it as it looks to the future.

Tourism is a bit of a novelty in Pristina and Kosovo as a whole, but its starting to feature more and more on people's international travel plans, especially for those who want to understand the Balkan region.

What are the top attractions to visit in Pristina?

The must-see attractions to visit in Pristina are:

Readers planning a trip to Pristina and Kosovo often have similar questions to ask such as:

Is Pristina worth visiting?

Pristina is worth going to if you are planning a trip in the Balkan peninsula. As the city is quite small and compact, it is easy to get around on foot, and most of the main sightseeing attractions are located in or near the city center.

Is Kosovo good for tourists?

While Kosovo is never going to be one of the most popular destinations in Europe for tourists to visit, it's an interesting experience for more seasoned travelers. As tensions in the country change from time to time, you should check your government websites for recent travel updates.

What is Pristina known for?

Some of the most important places to see in Pristina include Mother Teresa Boulevard, the National Library of Kosovo, and the main square.

Is Pristina safe to visit?

If found that Pristina was a very safe city to visit as a tourist. Although the city may be associated with its more recent history, visitors can on the whole expect a relaxed atmosphere with friendly people.

Do they speak English in Kosovo?

English is widely spoken in Kosovo and Pristina in particular, especially by under 30s. English is taught at a young age in schools, and it is generally easy enough to find someone who has enough English to answer any questions you might have.

Are you thinking to travel through the Balkan region? You may also be interested in these other travel guides. 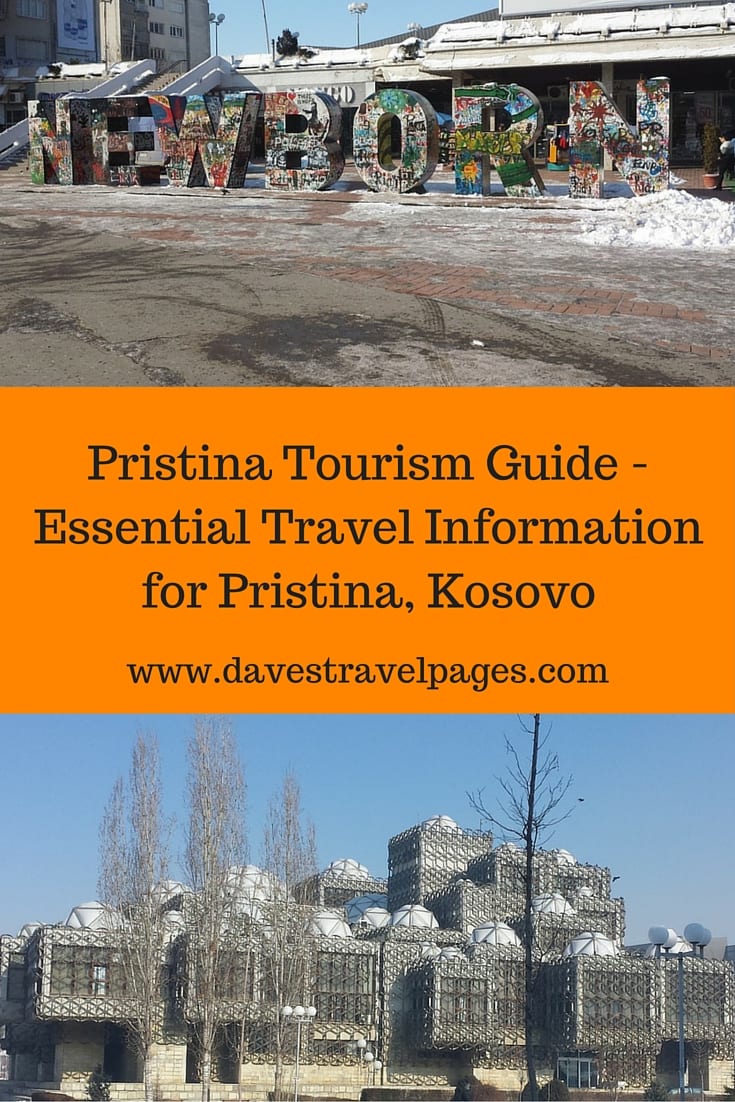 Have you visited Pristina, or would like to travel to Kosovo? I would love to hear from you, so please leave a comment below.