The Meteora Monasteries are a must see when visiting Greece. This guide will help you visit Meteora Greece, and make the most of your time in this mesmerising place! 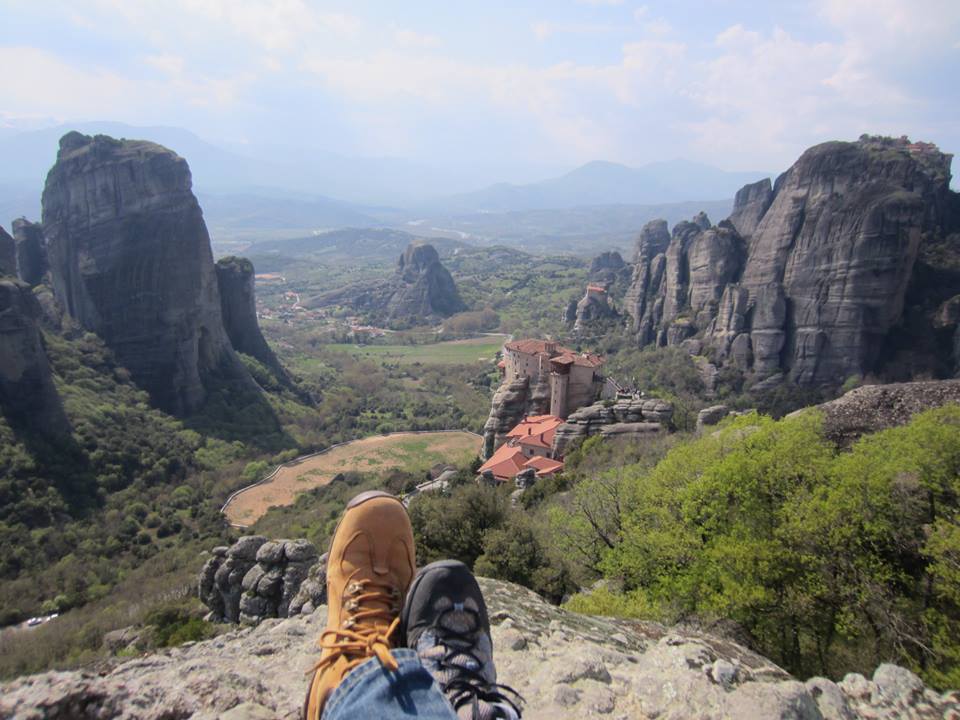 Greece is a country rich in amazing destinations, and the legendary landscape of Meteora is certainly one of my favourites. I've been fortunate to visit Meteora several times now, and each time it never fails to amaze!

Meteora consists of an awe-inspiring landscape. Tectonic activity, aeons of weathering, and geological change have all left their mark. Today, enormous rock pinnacles emerge from the ground, reaching out into the sky.

The perfect combination of the Meteora monasteries perched on top of fantastically eroded rock formations is certainly a sight to behold. Throw in a sunrise or a sunset, and you too will come away from Meteora as smitten with it as I am!

This Meteora blog post aims to give you all the information you need to both inspire and plan your own trip. It also pulls together my other posts about Meteora Greece which go into key areas in more details.

Here's my guides to help you plan which monasteries to visit in Meteora.

How to get to Meteora from Athens 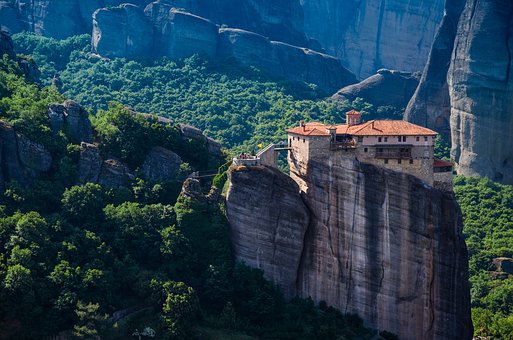 Where To Stay Near Meteora

If you are planning to stay overnight in Meteora, this guide to the best hotels will help you narrow down your Meteora hotel selection. 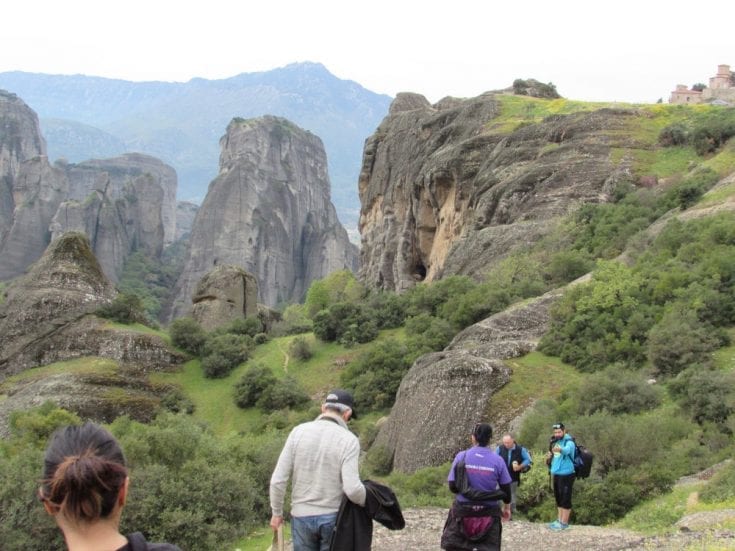 Meteora Greece is a wonderful area to go hiking in. In this Meteora blog post, I share my hiking experiences near the Meteora monasteries. 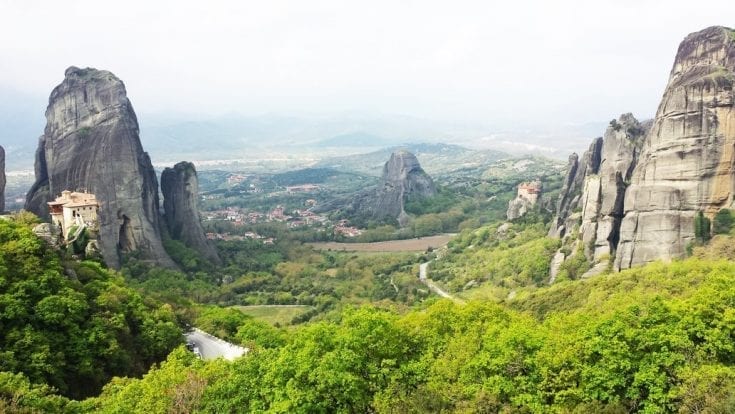 A selection of photos taken when visiting Meteora, Greece. It really is one of the most amazing landscapes in the world! 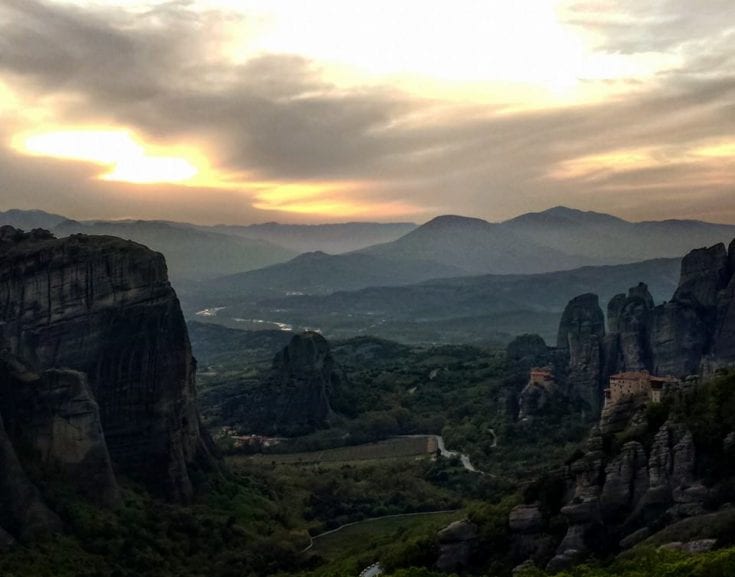 Finish your day of visiting the Meteora monasteries the right way by seeing a sunset. Here's all you need to know about choosing the best Meteora sunset spot.

Where is Meteora in Greece?

Meteora is situated in the Thessaly region of Greece, nearby to the town of Kalambaka (spelt multiple ways). The area of Meteora is classed as a UNESCO World Heritage Site, and is largely owned and/or controlled by the Greek Orthodox Church.

How to get to Meteora

You can reach Meteora by train, bus, car, or organised tour. It's just about possible to visit Meteora on a day trip from Athens. Personally, I think it's better to stay longer in the area.

I've got a deep dive article mentioned above which explains each option to get to the Meteora monasteries in more details.

How many monasteries are there in Meteora?

What's the history behind the Meteora Monasteries?

During the 9th century, a group of monks began to live in the area, carving out place to sleep at the top of the mountains. Even to this day, you can see some of the hollows they created.

As time went on, monasteries were slowly built on top of the mountains, often quite precariously! This was to give the monks solitude, offer a degree of protection, and perhaps even to bring them closer to God!

During the time of the Ottoman occupation, monasteries such as those at Meteora kept the Greek Orthodox religion alive through persecution. They are also credited with having kept vital parts of Greek cultural identity intact. 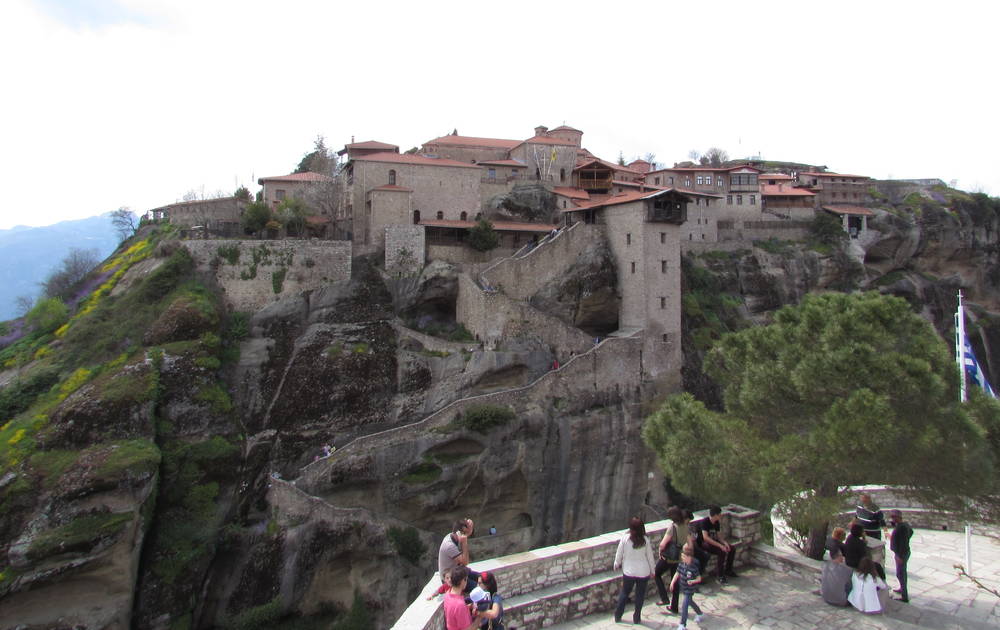 The Monastery of Great Meteoron is the biggest and oldest monastery in Meteora. If you only have time to see just one of the monasteries in Meteora, make it this one.

The monastery was founded in the 1340s by Saint Athanasios Meteorites, and kept increasing in size and importance over the years. In the mid-16th century, around 300 monks used to live here, and you can see some of their skulls on display in the monastery. Today, only three monks live here.

The monastery consists of the uniquely decorated katholikon (the main cathedral) with several unique carved wooden icons, a hospital-home for the elderly, a cistern, the old refectory, a kitchen, a tower, monk cells and several small chapels.

There is also an amazing library hosting hundreds of manuscripts, documents and books, as well as fascinating collections of gold-embroidered cloths, mitres, epitaphioi and silverware.

Be prepared for the slightly macabre sight of the skulls of former monks when your visit Grand Meteoron. I'm sure there's a very good reason why they kept them… 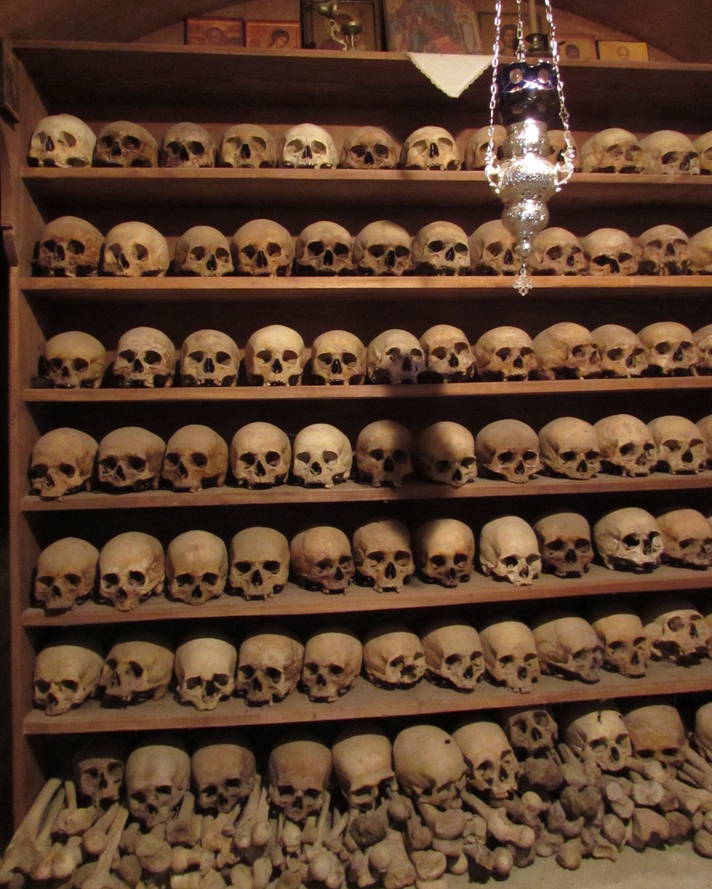 Pro tip: Allow at least a couple of hours in the Great Meteoron Monastery. When you are admiring the view, look out for the rock climbers! 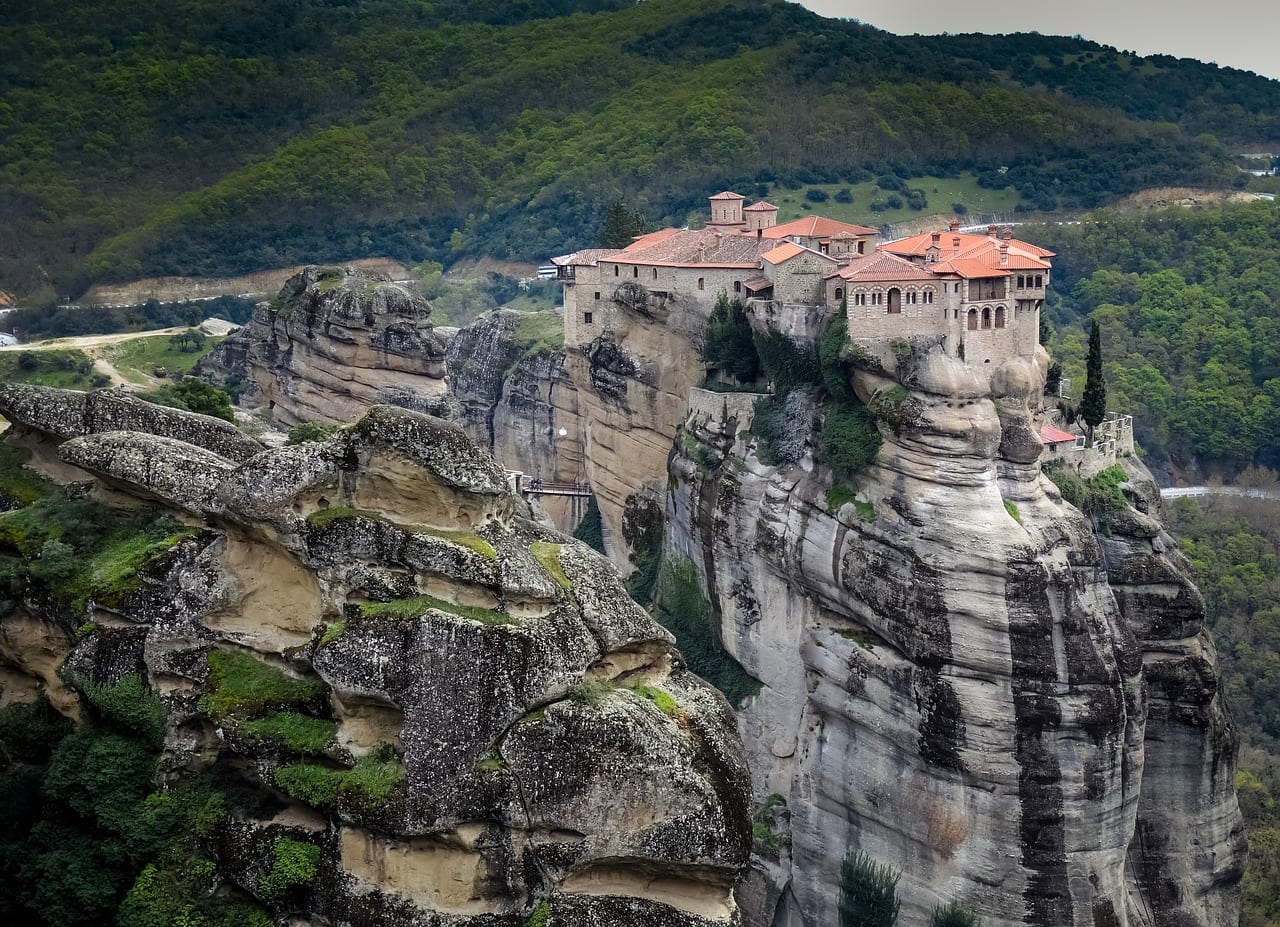 Varlaam monastery was founded in 1350 by a monk named Varlaam, and remained abandoned for almost 200 years after the death of its founder. It was re-established in the 1540s, when around 35 monks moved there. If you visit today, you can meet seven monks.

Originally, getting to the monastery was only possible through wooden ladders hanging from the rocks, and monks often risked their lives trying to ascend. In the 19th century, steps were carved into the rock to facilitate entry to the monastery.

If you visit Varlaam monastery you will see several important frescoes in the main cathedral and the small adjacent chapel of the Three Ierarchs. Furthermore, there is a unique collection of around 300 manuscripts, texts and other written materials.

Pro tip: Do not miss the huge barrel with a capacity of 12 tons which was originally constructed to store rainwater. These days water is collected in tanks. 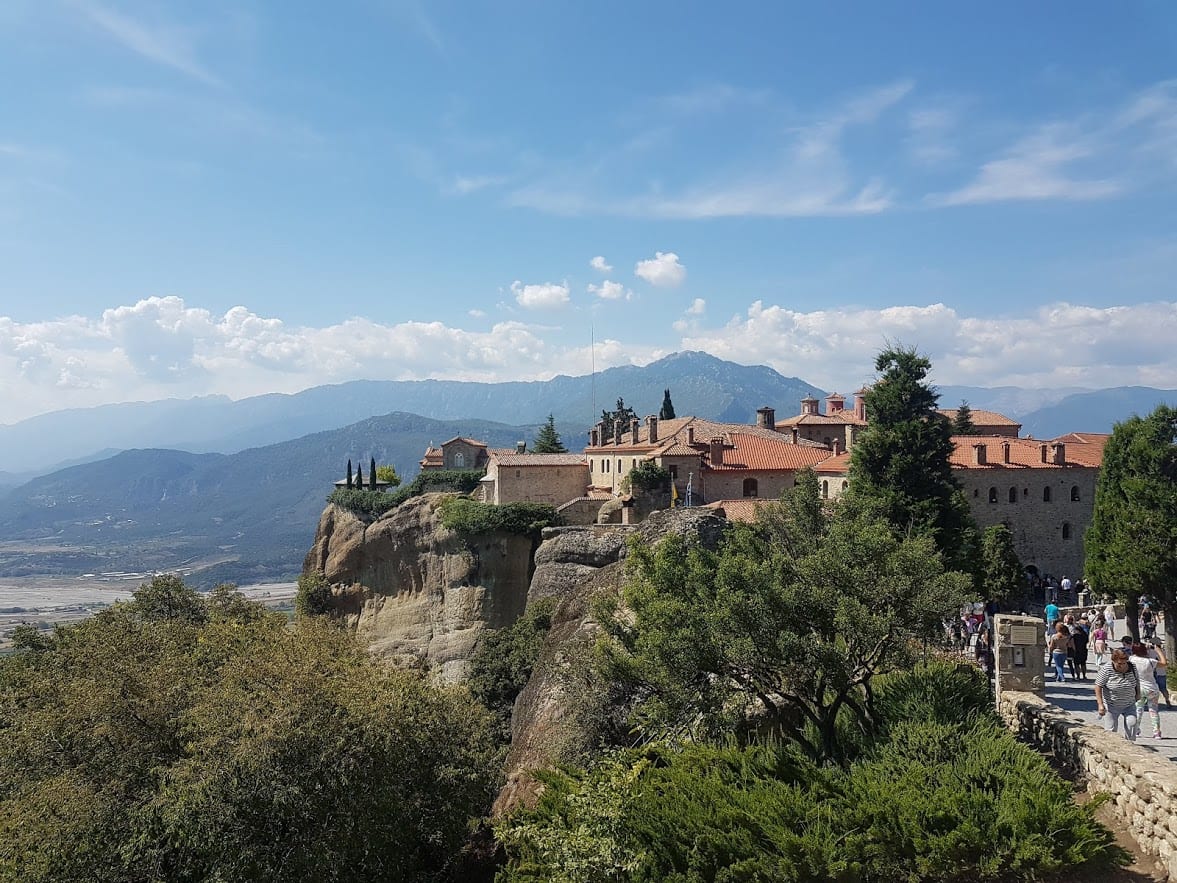 It is not exactly certain when the monastery of St. Stephen was founded, but it was likely in the 15th or 16th century. Although it started as a male monastery, it was converted to a convent in 1961, and is nowadays home to no less than 28 nuns. In the 1970s, a small orphanage was established in the monastery, with nuns being the teachers.

Apart from the katholikon, the monastery consists of the old refectory / museum, the kitchen, a guest house, a library and workspaces for painting, decoration and other artistic endeavours. The buildings have all been renovated. As for the frescoes in the main cathedral, the original ones have been restored, while others are currently under construction.

The monastery of Saint Stephen is home to unique manuscripts and rare books, printed as early as the1400s. You can also see important post-Byzantine icons, textiles and silverware. 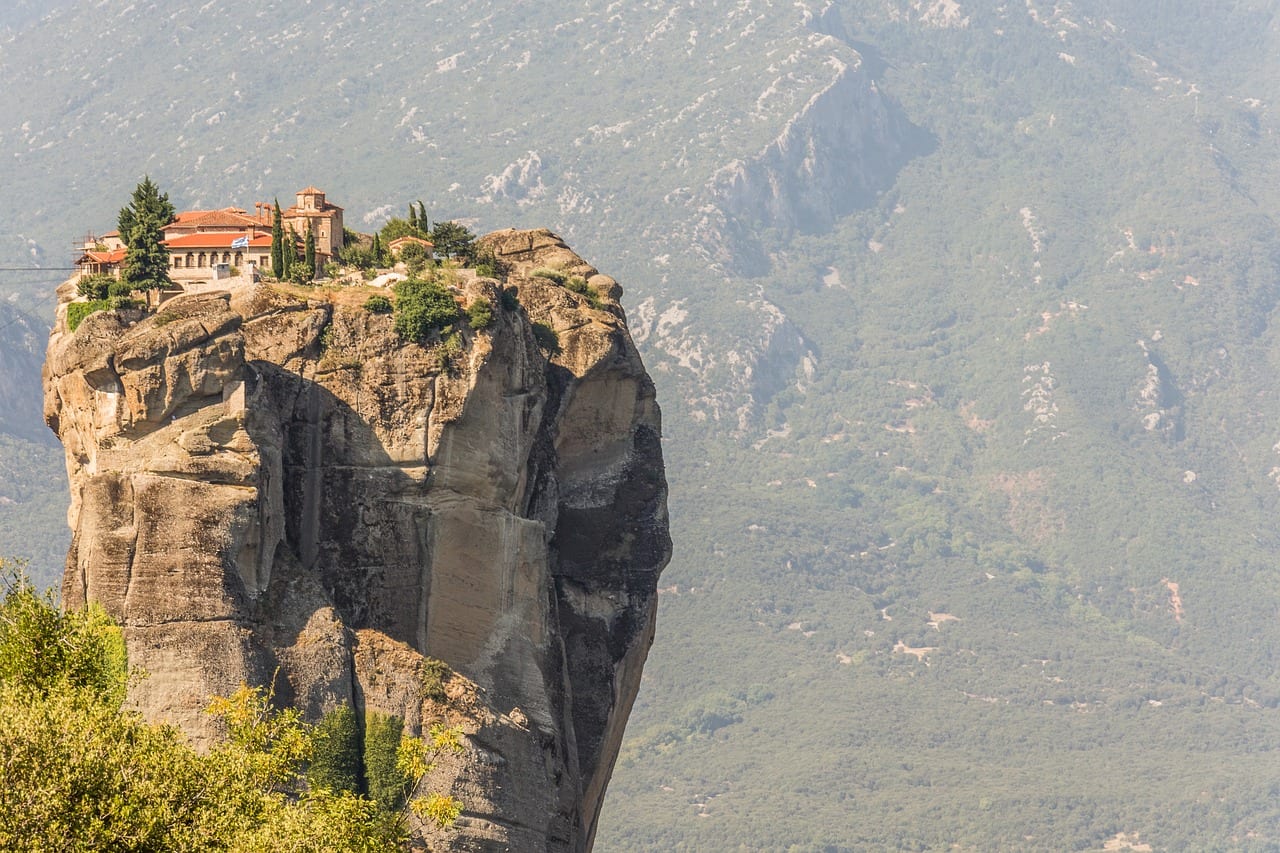 Perched literally on the top of a very steep rock, the monastery of Holy Trinity was likely founded between 1438-1476. Until 1925, when a staircase of 140 steps was carved in the rock, entrance to the monastery was only possible by rope ladders and nets. Today, four monks live here.

Apart from the main church, which has few windows and is quite dark, you can check out the refectory and reception halls, as well as the water tanks. Also, do not miss the chapel of St. John the Bapist, a small church carved in the rock.

There are currently no manuscripts in the monastery of Holy Trinity, as they were moved to the monastery of St. Stephens. Furthermore, a collection of rare books and other precious church items, including the monastery bell, were unfortunately lost / stolen during the Second World War.

Pro tip: If you are brave enough to climb the 140 steps, make sure you have plenty of time to enjoy the view! 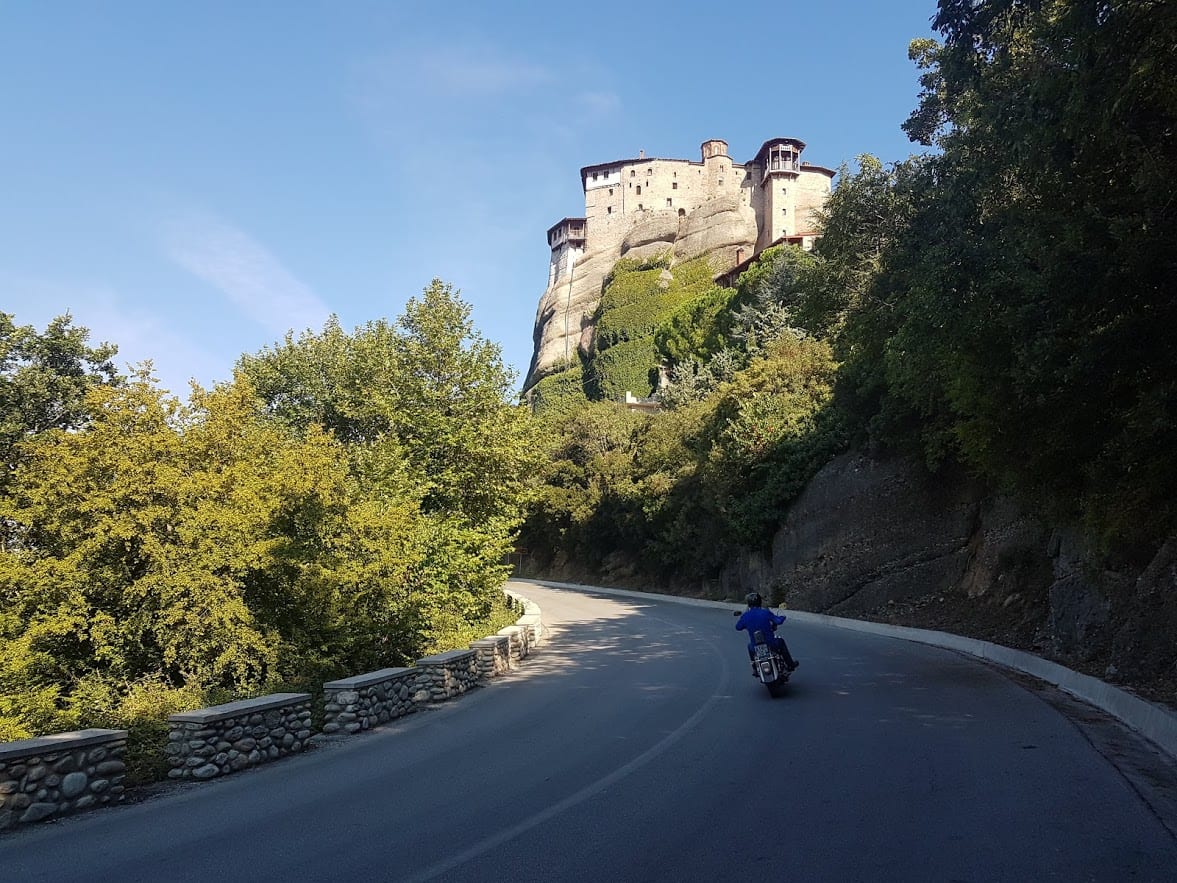 Roussanou monastery was founded around 1388, or, according to another story, around 1530. It was plundered during the Ottoman period and almost destroyed during the Second World War, but it survived, and was restored and renovated in the 1980s. Today it has been transformed into a convent where thirteen nuns live.

The monastery is built on a steep, narrow rock and is very impressive from a distance. These days access is through a cement staircase, but in the past monks either climbed or used rope ladders and nets, similarly to the Monastery of Holy Trinity.

The frescoes in the church date from around 1560 and are some fine examples of post-Byzantine art. Make sure you check out the composition of the Assumption of the Virgin and the Resurrection of Christ.

Pro tip: Some of the frescoes have been further destroyed because of moisture produced by people visiting the monastery! 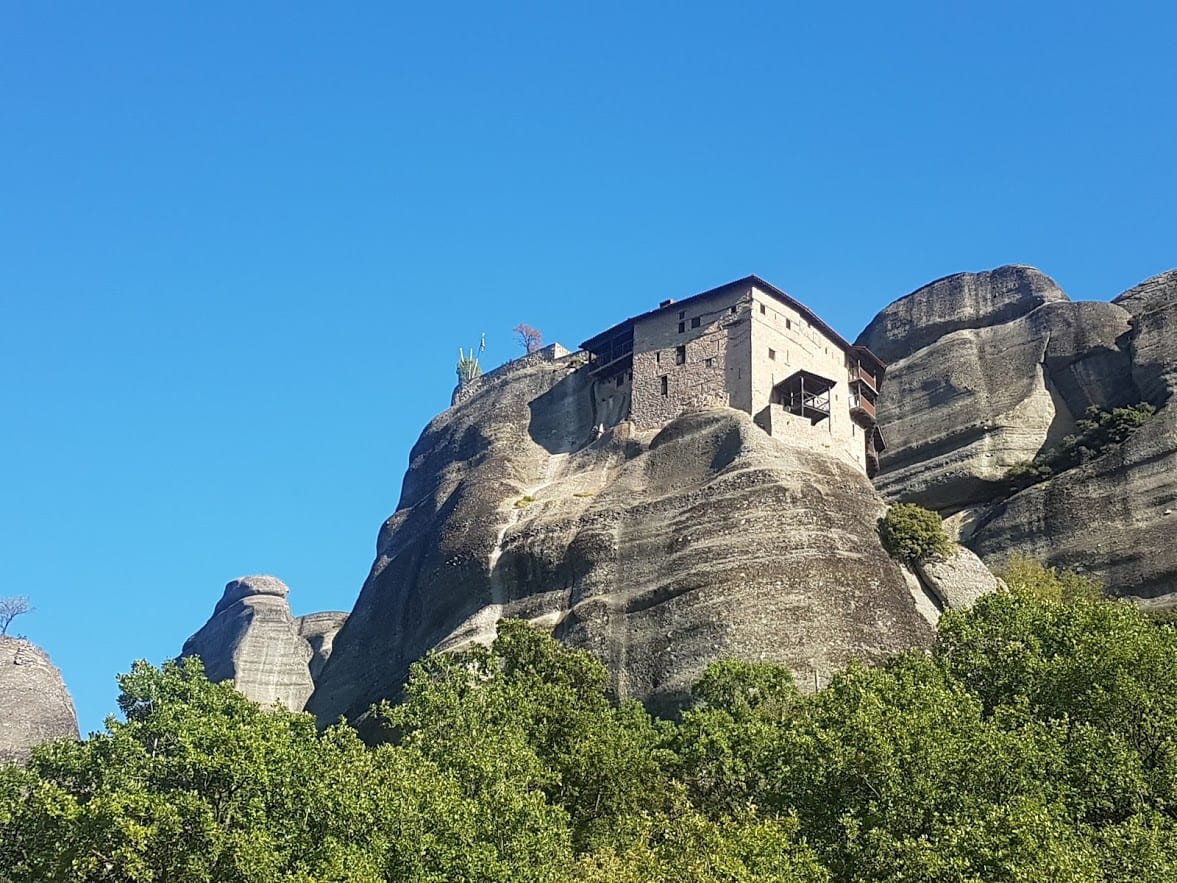 The monastery of St Nicholaos Anapafsas was built in the beginning of the 14th century on a very narrow rock. As a result, three floors, rather than one, had to be constructed.

The monastery was abandoned in the early 1900s and was restored in the 1960s. Since 1997, only one monk has been living here. Much like the other monasteries, the first monks could reach it with the help of ladders and nets, but more recently steps were carved in the rock.

Because of the limited surface, the katholikon is on the second level, below the refectory, which is on the third floor along with the ossuary and a small chapel. As for the first floor, there is another small chapel as well as a crypt.

Pro tip: The frescoes in St. Nicholaos Anapafsas monastery were painted in 1527 by the famous Cretan artist Theophanis Strelitzas, and are very special as they are his only works he has ever signed. 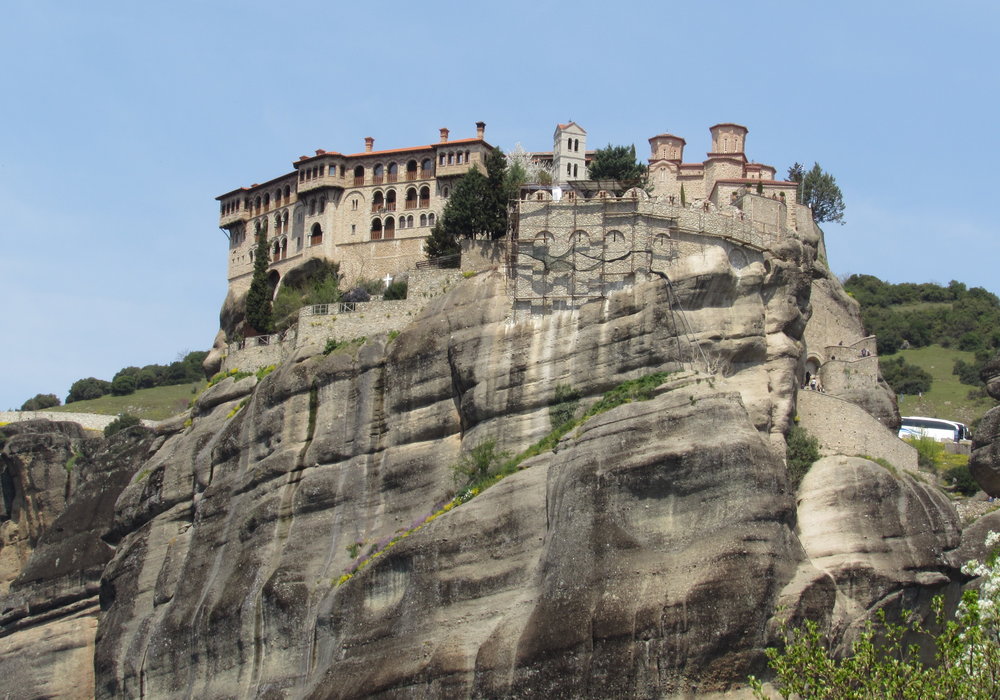 How long to spend in Meteora?

Many people spend only one day at Meteora, which personally I think is a bit short. However, if the choice is between one day and not at all, visit Meteora for the one day!

I would suggest two full days is a better amount of time to spend in Meteora. You can see the Meteora monasteries at a more relaxed pace, take a hike, and even visit the Meteora Mushroom museum! 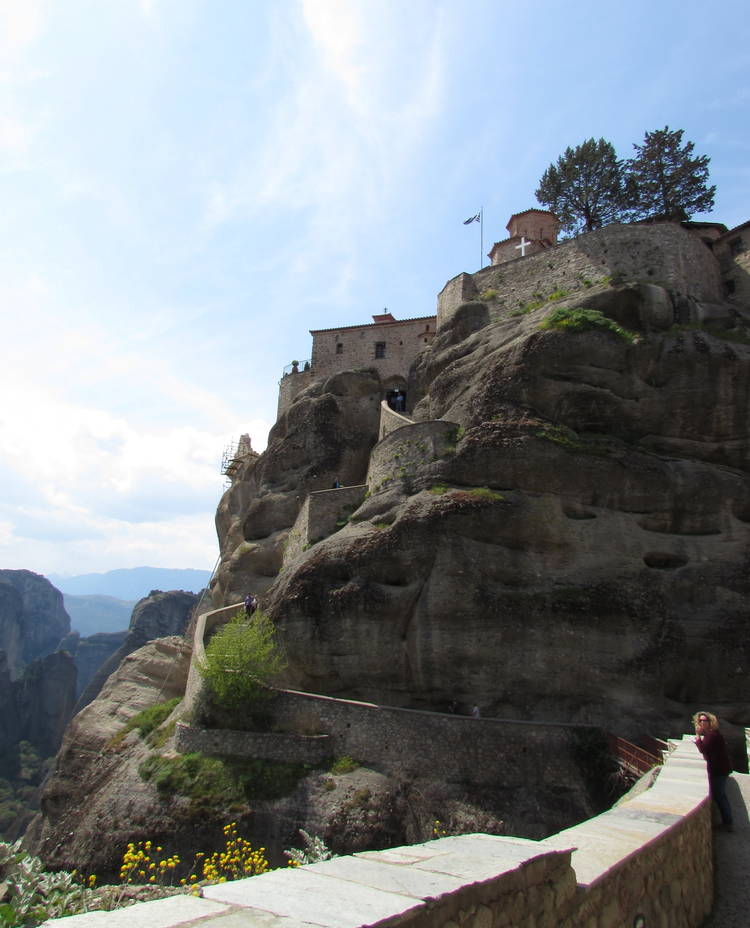 Meteora is best visited from the nearby town of Kalambaka. This town is sometimes translated Kalabaka and Kalapaka just to make things simple!

Where to stay in Meteora – Take a look here for the best places to stay in Kalambaka, Meteora.

Hiking in Meteora – There are various hiking trails which lead from monastery to monastery, but plan ahead, and take plenty of water.

Getting around Meteora – Alternatively, those with a car may find it more convenient to drive around the area and enjoy the views, as we did. For non-drivers, it's  possible to hire a taxi for the day. There are plenty of organised tours of Meteora that can be booked.

Meteora Tours and Activities – A look at the best Meteora tours from rock climbing to hiking.

Regardless of how you travel, Meteora is another Greek gem, and one that shouldn't be missed when visiting the mainland.

Additional – I visited Meteora again in 2016. You might like to read the full article here – Majestic Meteora. 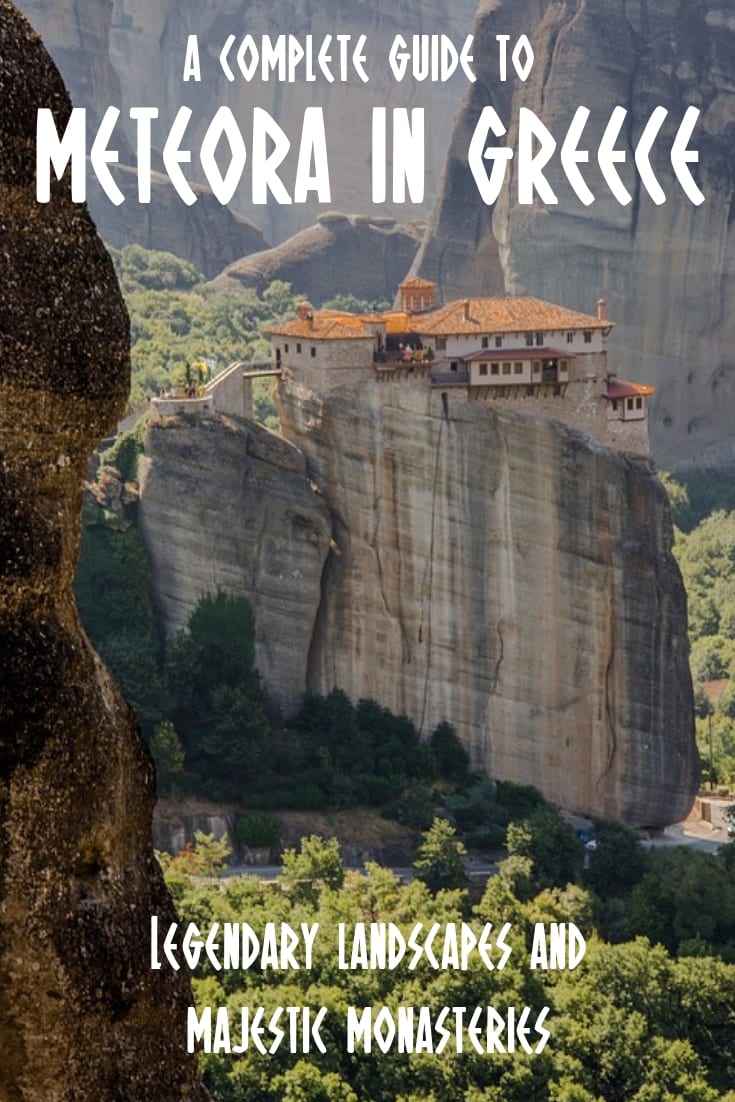