After a day off from cycling, it was time to ride to my next destination. This bike touring blog covers cycling from Tehuantepec to Niltepec in Mexico. 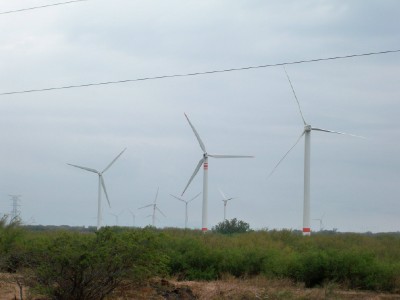 Cycling from Tehuantepec to Niltepec in Mexico

I was a bit hesitant about leaving in the morning, as reports of flooding in Mexico City were all over the news.

Although Mexico City is quite away from Tehuantepec, the floods were very severe, and I wondered if the cold front that had hit, was heading in my direction.

My Spanish isn’t really great, and either is the Mexican news and weather reporting for that matter, so it was either never mentioned, or I missed it.

In the end, I decided to leave, and everything was fine. In fact, it was more than fine… It was a great days cycling.

The road had a reasonable shoulder, traffic was light, clouds blocked the heat of the sun, and a tailwind blew me along by a field filled with power generating windmills.

Staying in Niltepec in Mexico

Overall, I gave the days cycling a seven out of ten. (To get eight, the Burger King I saw would have been positioned a little later in my day. Nine would involve two flame haired Valkyrie warrior maidens cycling by on Penny Farthings, and for ten, they would have to be naked).

Anyhow, I ended up in the tiny town of Niltepec, with 70kms done by 11.00, and decided to call it a day. I stayed in Hotel Oasssis. Yes, that is how it was spelt !