These basic Greek words are easy to learn for your next vacation in Greece. Includes explanations of the Greek alphabet, pronunciation, and everyday Greek words.

It's all Greek to me

You land in Greece, you see your first poster written with Greek letters, and what's the thought that immediately springs to mind? It's all Greek to me!

Greek can be a baffling language to the uninitiated. I've lived here for four years, and my own failures to get to grips with the language are almost legendary!

Do I need to speak Greek to visit Greece?

The simple answer here is no you don't. The majority of people you are likely to meet will probably speak English to a fairly high standard.

Greece has long attracted visitors from all over the world, and let's face it, English is the language of travel for most regions. Even on the quietest Greek island you'll find some locals to communicate with in English.

With that said, it's always nice to know a few words of the local language, even if you are only on vacation in Greece for a short while. The effort is always appreciated, and it doesn't take long to learn a few basic Greek words.

You can start with Kalimera, which means Good Morning.

Do I need to read Greek to speak Greek?

You certainly don't need to read Greek in order to memorise basics such as how to say goodbye in Greek. Most menus you encounter when on holiday in Greece will often be translated into English and other languages as well. 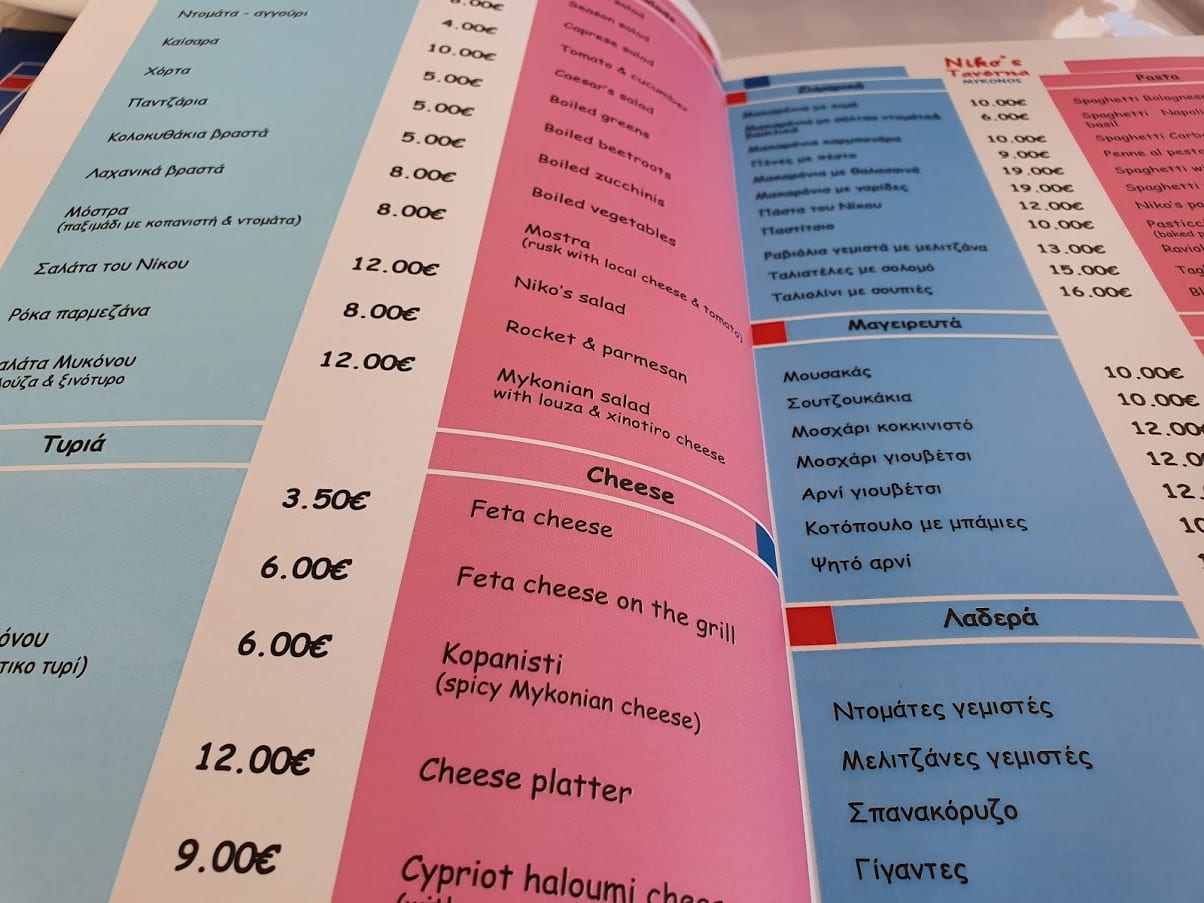 Being able to read some of the alphabet might prove useful though in situations where information such as place names and street names are only written in Greek.

If you plan to take a road trip in Greece, it might also be useful to be able to read Greek words, as not all road signs have Latin characters.

Most of the places of interest will be signposted with a brown sign in both languages though, as shown in the photo below. 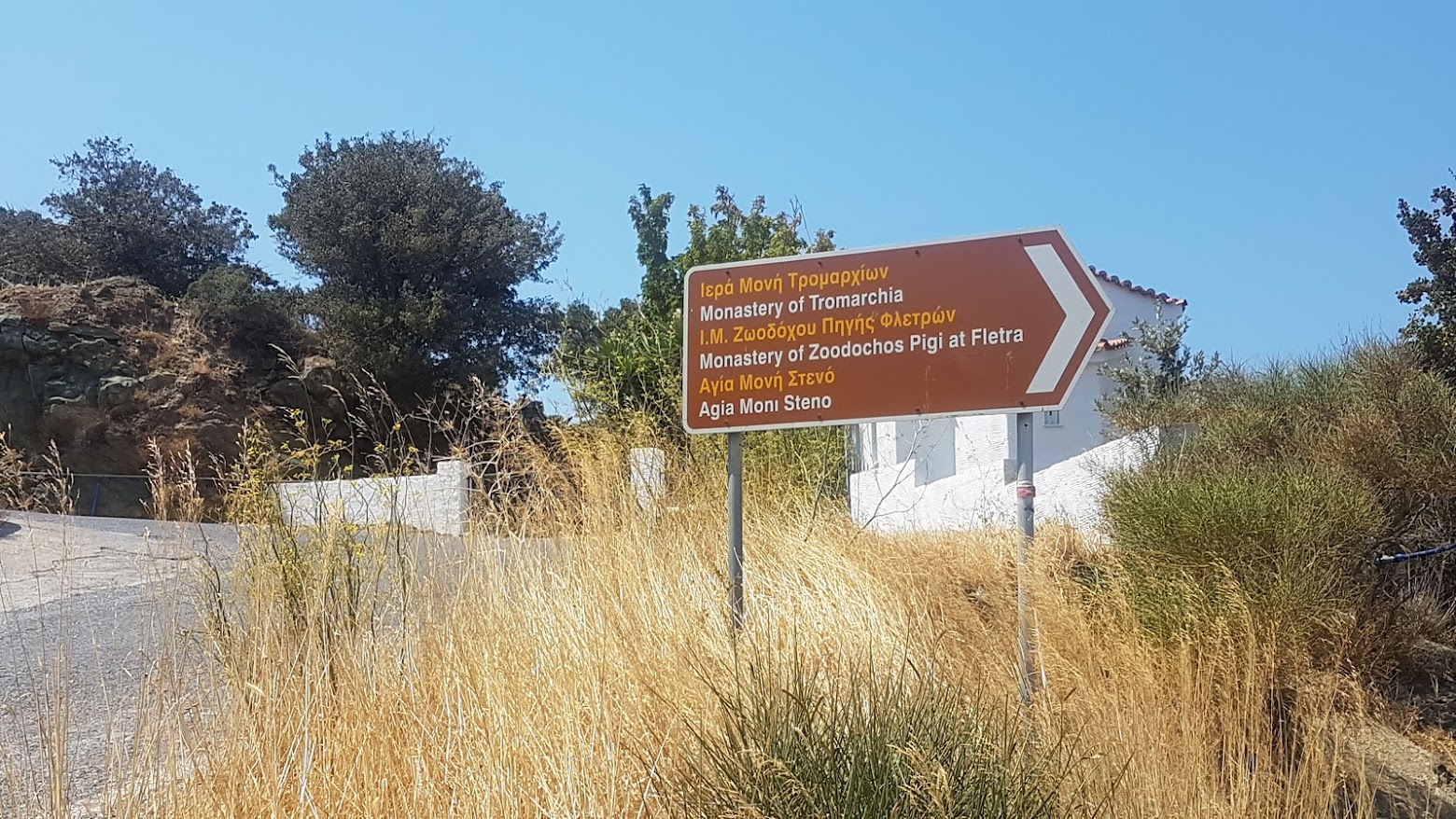 The main reason visitors find Greek hard to read and learn, is the Greek alphabet. Dave often refers to them as a series of squiggles, dots, and triangles!

Some of the letters might remind you of maths classes. Others might seem to resemble Latin letters, but are not the same at all. 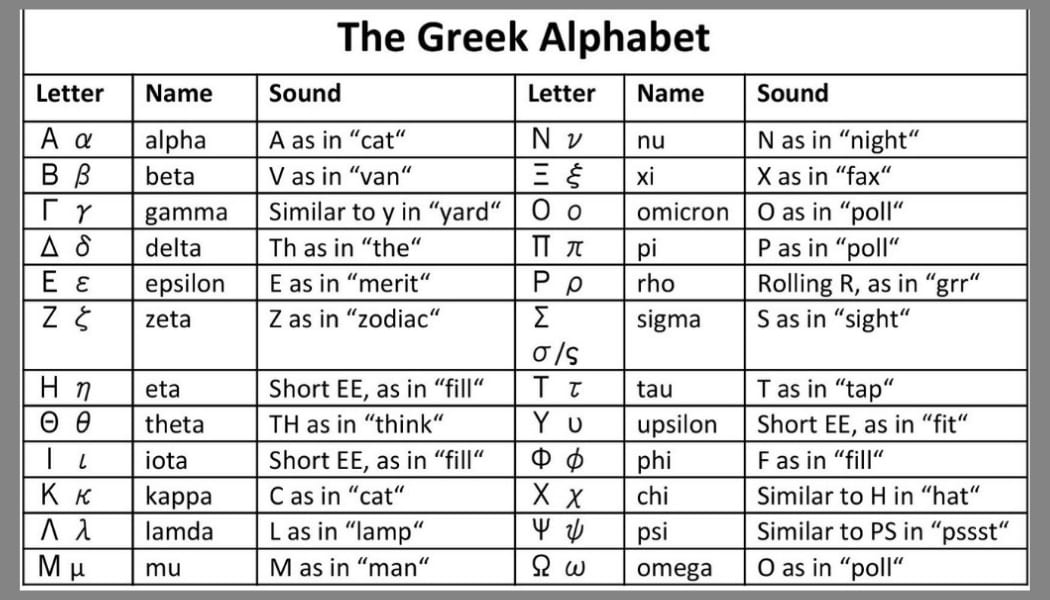 As you might have spotted, the obvious problem here is that the Greek language has 24 letters, whilst English has 26. This is where the issues begin, but they don't end there!

How to pronounce Greek letters

Confusingly, a few vowels are pronounced in exactly the same way. Even worse, some of the Greek letters look exactly like English letters, but the sounds are different.

As an example, the Greek letter “ρ” might look like the English letter “p”, but it sounds like the letter “r” (in fact the sound is that of a rolling r).

At the same time, as you may remember from mathematics, the Greek letter “π” is pronounced like the English letter “p”.

Confused? Read it over and over until it starts to make sense!

If you make an effort to memorize the letters, you will be surprised at how easy it actually is to read Greek words, especially those in capital letters.

Furthermore, there are certain letter combinations that produce a new sound. As an example, there is no letter for the sound “d” in Greek, so the combination “ΝΤ / ντ” is used instead.

There are about 10-15 of those combinations, using either vowels or consonants, and if you are serious about learning Greek you will need to memorize them.

And now on to the fun bit – speaking Greek! Here are a few words and Greek phrases that you are likely to find useful during your holiday in Greece. We've included the spelling of these essential Greek words in capitals, regular letters, and a way to pronounce them phonetically.

You should stress the letters that are capitalised in the phonetic guidance.

Note that the syllable where the stress goes is very important in Greek. In the above table, the syllable that should be stressed has been capitalized.

For the most part, visitors tend to stress words in the wrong syllable, which apparently many Greeks find quite amusing! The correct Greek pronunciation is quite important.

Putting together correct sentences in Greek is another matter altogether. This is because the Greek language has three genders, and all words (nouns, verbs etc) are conjugated.

They didn’t invent the phrase “it’s all Greek to me” for no reason!

Oh, and if you were wondering, the Greeks say “it’s all Chinese to me”!

Here are some common phrases that you might want to throw into a conversation as you travel around the Greek islands. It's fun to see people's reactions when they realize you might know some Greek words and phrases!

Learn Greek Before Your Vacation

If you want to explore learning Greek further, you might find some of the following helpful. From Greek phrasebooks and audio books on how to learn basic Greek, to full deep dive courses, take your pick!

Pin this guide to useful Greek phrases for later

Do you have a vacation planning board on pinterest? Please pin this guide to everyday Greek words to use on your vacation for later! 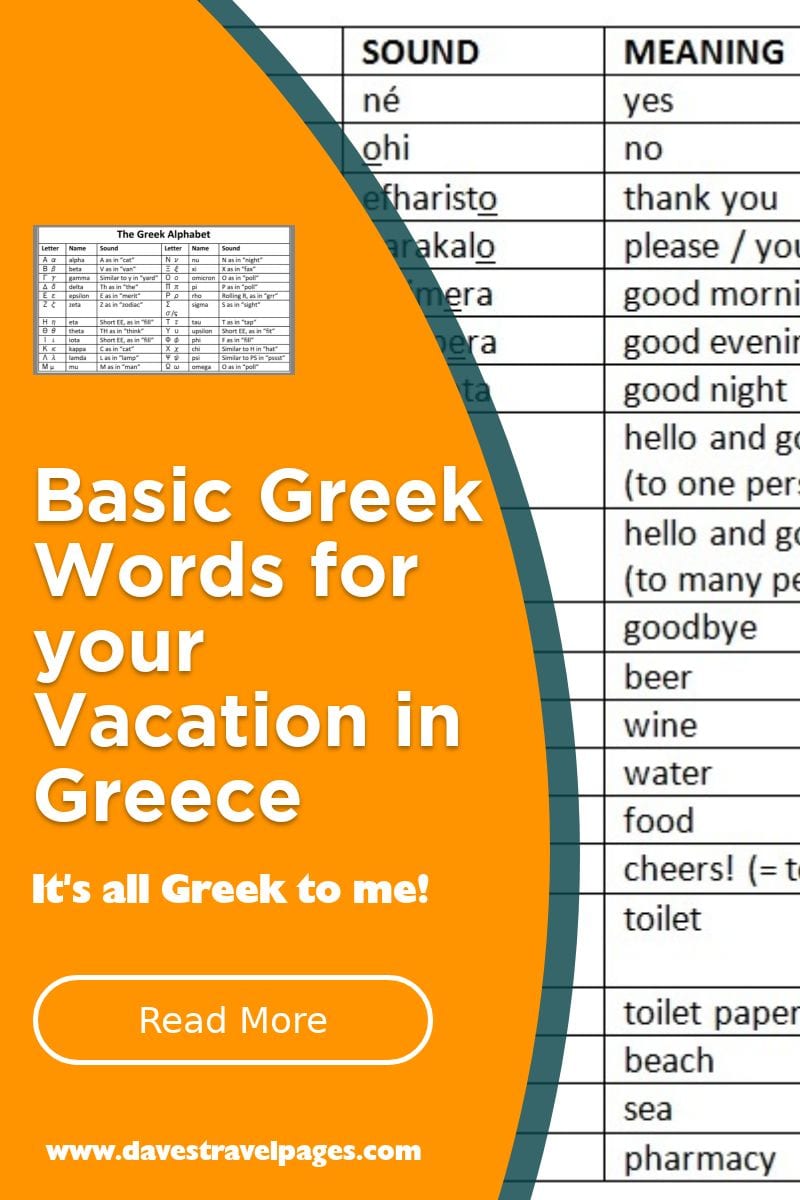 If you're planning a vacation in Greece, you've landed at the right place! I've been living in, and writing about Greece for nearly 5 years, and have hundreds of free travel guides for you.

If you're unsure where to start, I'd suggest signing up for my free guides by using the form in the middle of this post. Otherwise, you might find these of interest.