The B17 Brooks touring saddle is the first choice of bicycle touring saddle for many long distance cyclists. After using a Brooks saddle for touring over thousands of miles myself, here’s why I think it’s the best bike saddle for long rides. 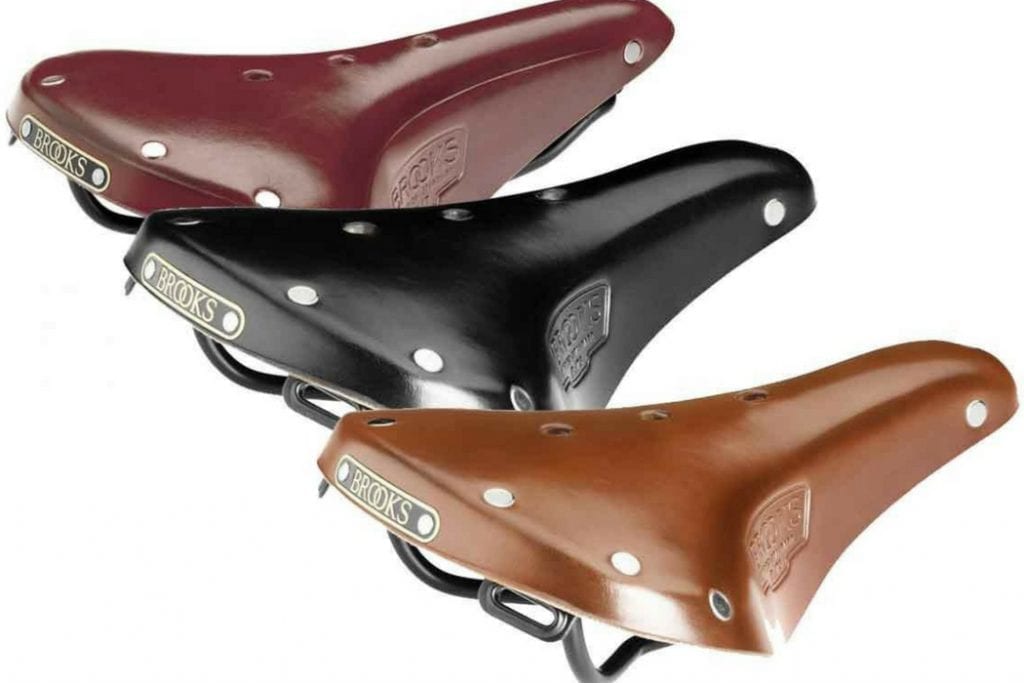 I didn’t always use a Brooks B17 saddle. Back when I first started bike touring, I pretty much just went on tour with whatever bike seat came with the bike.

As a lot of the bikes I used in the beginning were super-cheap, you can imagine how (not!) comfortable those saddles were!

In fact, it took me a while to develop a mindset where I was willing to invest in good quality bike touring gear. As such, I didn’t get my first Brooks touring saddle until after I’d already completed two epic long distance bike tours.

Those were cycling from England to South Africa (12 months), and Cycling from Alaska to Argentina (18 months).

I should have used a Brooks B17!

Man, if only I’d used a Brooks touring saddle on those trips! I still remember the pain of spending more than four hours in the saddle when cycling through Africa. I even took to buying a new saddle every few thousand kilometres.

Strangely though, the 10 dollar bike saddles I picked up in countries like Tanzania and Malawi just never seemed to get any more comfortable!

So, why didn’t I just get a Brooks saddle in the first place?

Well, I made these classic mistakes.

Sure, it might be fine for commuting to work and back, or weekend rides of a few hours. Day after day of 8 hour cycling though? Nah.

I need a gel seat because they are more comfortable. – Again, this is a big nahh. They might be nice and soft for an hour or so, but that's about it. Add into that chafing issues, and they soon lose their appeal as a bicycle touring saddle.

My bike came with a saddle, and I put a gel seat on it. It's not comfortable, but I am sure I will get used to it. – Even now, I look back on myself and shake my head!

Don't get me wrong, I put up with it for month after month. There is a big difference from enduring something and being comfortable though!

So, enough of the mistakes with my other saddles. It was time to invest some money in a Brooks B17 saddle, and see if it really was the best touring saddle on the market.

Which Brooks saddle for touring?

Hold on though, Brooks seem to do all sorts of bike touring saddles! Not only does the B17 range have different variations, but there’s also the Cambium C17 seat as well. Which is the best Brooks saddle for touring?

The Brooks B17 Family

As far as I can work out, these are the following leather saddles in the Brooks B17 range:

That's a lot of Brooks models. They don’t make it easy, do they!!

I took the basic option, which is the Brooks B17 standard saddle. I daresay there are subtle differences, and that the best Brooks saddle for touring differs between people. For example, the Imperial range features a cut-out which some guys find more comfortable.

The standard B17 leather saddle seemed good enough for me, and comes in 6 different colours. I actually now own two Brooks saddles, and have one honey coloured, and one plain black. The honey coloured leather bike touring saddle is probably my favourite.

Hold on, a leather bicycle saddle?

I know. In an age where modern materials are being developed on a regular basis to increase efficiency, cut down weight, and improve comfort, a leather saddle for bicycle touring seems a bit of an anachronism.

Take my word for it though, the B-17 is super-comfortable once you have gone past the break-in-period! Quite simply, they are the best touring bike saddle around.

Note: If you are looking for a non-leather seat, check out the Brooks C17 from their Cambium range.

Firstly, the so called “breaking in period” sounds worse than it is! During that time, the saddle isn't painful to sit on or anything. It's just not as comfortable as it will be later on.

What happens during this period, is the seat starts to mould itself to the shape of your butt. As it does so, it becomes more and more comfortable.

Funny story here – My two Brooks B17 saddles look totally different where they have shaped themselves to my backside, but they are equally comfortable!

How long does breaking in a saddle take?

The break-in time seems to vary from person to person. I didn’t have difficulties with either of my Brooks saddles, and was able to get bike touring pretty quickly.

Other people have mentioned it might take several hundred miles for the B17 saddle to get truly comfortable.

Observation: You'll find instructions on how to break in the Brooks leather saddle when you buy one. Don't listen to the weird and wonderful methods some people describe online – follow the Brooks England advice! 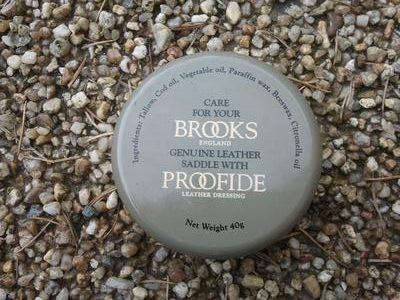 Leather does need taking care of, and the Brooks saddle is no different. Applying some Brooks Proofide from time to time is hardly a problem. Neither is tightening the saddle if needed.

One thing that I would suggest, is that when bicycle touring, cover the saddle with a bag at night. There is no need to expose it to the rain more than necessary. The same can also be said of keeping it out of direct sunlight for long periods of time.

As you might expect, you'll find solutions to the most common scenarios within the Brooks products range.

Another key feature of the B17 saddle is the steel rails which provide a sturdy frame. On some models from Brooks, you can also have saddles with springs. 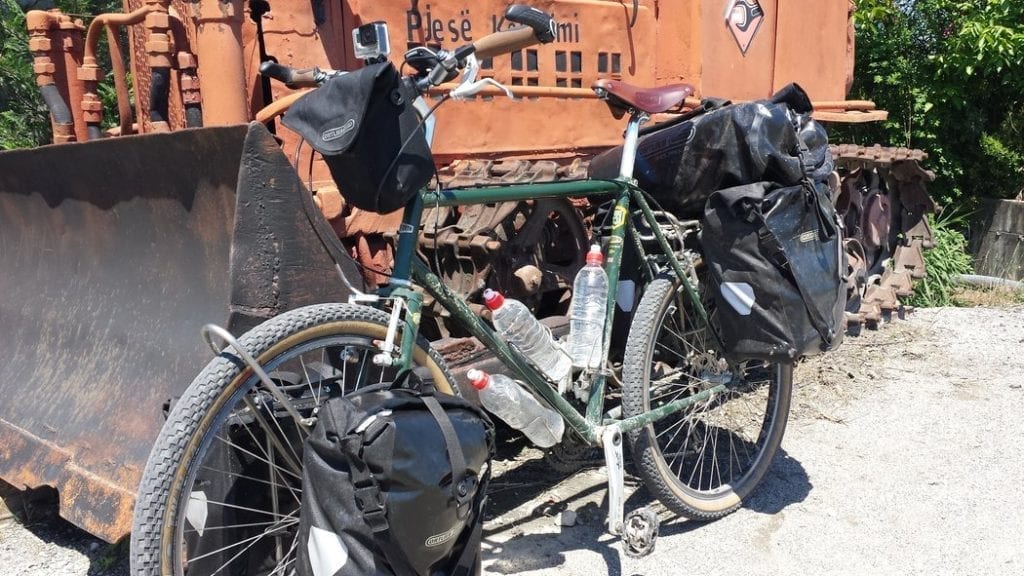 I’ve been using Brooks saddles for about 5 years now. During this time, I’ve taken them on thousands of miles of bike touring, including cycling from Greece to England.

Even during the longest days of 8 or 9 hours cycling, I’ve never had a problem. They remain the most comfortable saddle throughout.  Even better, they are still in great condition.

There is no material wear or tear on either leather bicycle saddle, and all the copper rivets are still in place. They've lasted a long time, and look and feel like they will last for years more.

All in all, I find the B-17 to be a great saddle, and one I would continue to buy in the future if I ever add another bicycle to my collection!

Should you buy a Brooks saddle?

Of course, it’s totally up to you. I know for some people (and I was one of those), the idea of spending a hundred pounds / hundred and fifty dollars on a flagship model saddle seems a bit steep! Especially when you can get other seats at a fraction of the price.

After owning and using them myself as a rider though, I would say that it’s better to think of buying a Brooks saddle as an investment rather than an expense.

Not only are you saving yourself some butt ache, but you’ll also only ever need to buy one to literally last you a lifetime.

I honestly believe a Brooks is the best bicycle saddle for touring, but you need to try it and see for yourself. The choice, as they say, is yours!

These are some of the most commonly asked questions readers have about using the Brooks England saddles for touring trekking:

Are Brooks saddles really that comfortable?

The Brooks brand range of leather seats are comfortable because they offer fewer points of friction when compared with gel pads.

How long does it take to break in a Brooks saddle?

Most riders say that it take less than a few hundred kilometres for the Brooks to start feeling more comfortable.

How do I know which Brooks saddle to buy?

Brooks offer a range of saddles, any version of which could be suitable for you. The most famous is the B17, but there is also the Cambium C17, B67, and others.

They can be good for road bikes, but perhaps not for cyclists who are looking to maximize weight gains wherever they can. There are definitely lighter saddles available! 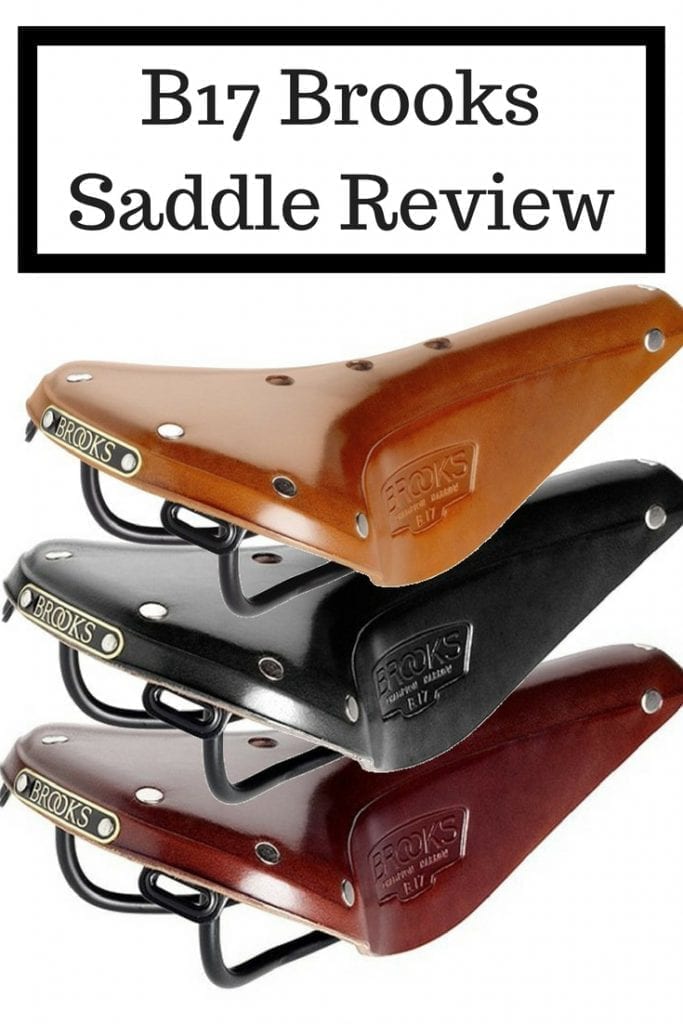 I hope you found this article on the Brooks bike touring saddle useful. Please feel free to pin and share the post. If you have any questions you’d like answering regarding the Brooks saddles or would like to contribute your thoughts on the subject, please leave a comment below.