This guide to bicycle touring shoes is designed to help you choose the best bike touring shoes for your next trip. Find out about SPD shoes for touring, whether regular travel shoes are suitable for a bike tour, and just how many shoes you really need! 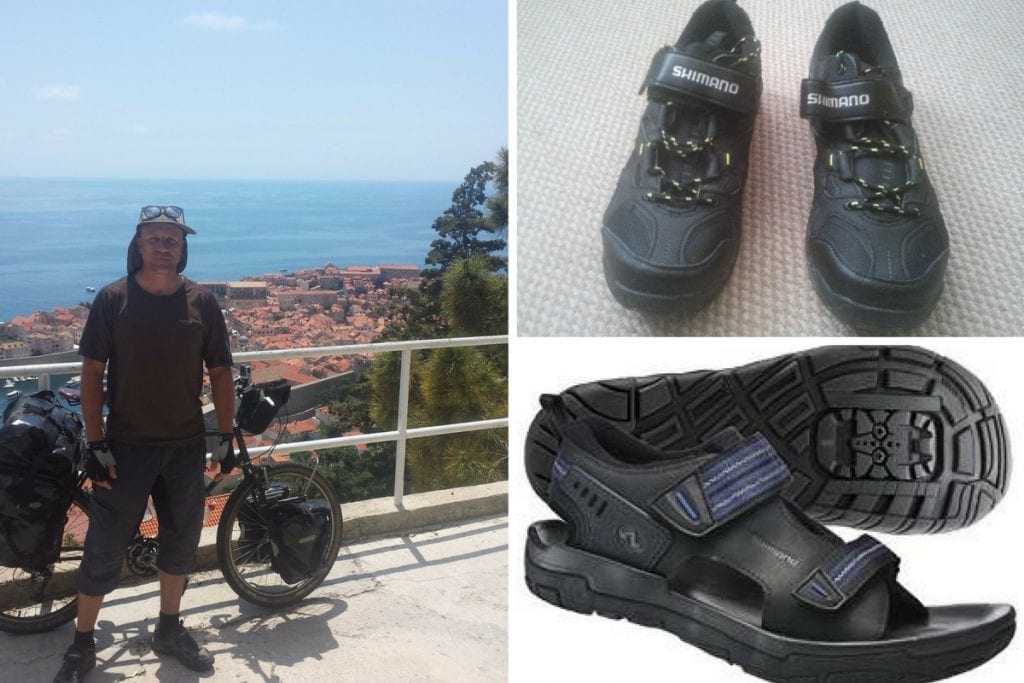 Why You Need Bike Touring Shoes

I've met all sorts of crazy people whilst bicycle touring. Hey, I'm one of them, right? Some of them seem to be touring with next to nothing, and others were towing quite literally the kitchen sink behind them.

The one thing everyone had in common though, was that they were wearing something on their feet. That's because footwear is one of those non-negotiable items of kit you have when bicycle touring.

Your feet are the major contact point between you and the bicycle, so you better look after them!

Bike touring shoes provide support, comfort, and can even help with cycling efficiency. It's only the style that varies.

How Many Shoes Do You Need On Tour?

For the actual cycling itself, you only need one pair of bicycle touring shoes. It's what activities you choose to do off the bike that will determine how many other pairs of shoes you need!

Some people tour with just the one pair. They use them for cycling, walking on the beach, hiking up a mountain, and anything else that happens along the way.

Other people have bike touring shoes they use just for cycling, and additional pairs for other activities they undertake on the tour.

I tend to have a dedicated pair of bicycle touring shoes, and carry a pair of light travel shoes as well as a pair of flip-flops/thongs with me.

This covers me in most scenarios, and also gives my cycling shoes a chance to dry out if I get caught in the rain.

As with anything to do with bicycle touring, how many shoes you take is up to you. After all, it's you that has to carry them around on the bike, no-one else!

There are two broad choices you can make when choosing footwear for bicycle touring. These are, should you use specifically designed cycling shoes, or should you use regular travel shoes for cycling?

Each one has its benefits depending on the type of bicycle tour you have in mind. Below, I give a breakdown of the different types of cycling footwear, along with examples of where they might be most suitable.

I conclude with my own opinion on what footwear is best for bicycle touring based on what has worked for me.

If you are a road cyclist, you will already be familiar with road cycling shoes. They have a cleat which means that you can ‘clip in' to the pedals, and this helps with cycling efficiency.

The cleat itself is not smooth with the surface of the sole of the shoe. Instead, it protrudes outward. So, while this makes it an ideal shoe for cycling, they are not much use as touring bike shoes. You wouldn't want to walk more than a hundred metres or so, as it's just uncomfortable!

Cons – You can't really walk anywhere in them, meaning another change of shoes is needed for time spent off the bike.

My Opinion – Not really bicycle touring shoes for a trip of longer than a weekend.

The other type of cycling shoes available, are SPD shoes. These also have a cleat which ‘clips in' to the pedals.

Unlike road cycling shoes, these cleats are recessed. This means that you get the cycling efficiency, and can also use them for walking when off the bike.

Even better, there are a range of specific bicycle touring shoes available with SPD cleats. These include enclosed SPD cycling shoes, and also sandals.

Many people prefer the sandal type SPD shoe with their open toes for cycling in hot weather. It goes without saying, they absolutely suck in colder climates! 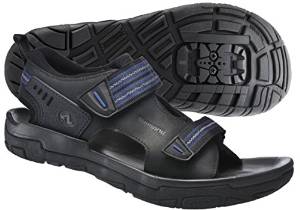 Pros – Great cycling efficiency. You can use the SPD shoe or sandals off the bike to walk in.

Cons – Whilst you can walk in SPD bicycle touring shoes, you need to be careful when on rocky or slippy surfaces. Whilst suitable for wearing on an average day off the bike, you wouldn't really want to do a days sightseeing or hiking in them.

My Opinion – You can remove the cleats from the bottom of the shoes if you want to walk some distance. In practice, I have never known anyone do this! Wear the shoes around the campsite, short walks to the market etc. You wouldn't really want to wear them all day for longer hikes though.

Of course, you don't need specific cycling shoes at all. Believe it or not, I completed my first bicycle tour of 4000kms around New Zealand in Timberland boots! So, if you want to wear a regular pair of travel shoes or sneakers on a bicycle tour, then go ahead.

Shoes with stiffer soles are best, and obviously the lighter they are the better. Whilst you won't be able to ‘clip in', you do have the option of using toe-cages on the bike to aid with efficiency.

Pros – Wear them on and off the bike. Wear any shoes you like!

Cons – If you are going to be wearing the same pair of enclosed shoes for cycling and everyday use, be prepared for the smell!

My Opinion – Having tried every option at one point or another, I prefer a dedicated pair of bicycle touring shoes. Whilst my Timberland boots worked great during that first trip, they had to be thrown away soon after! Well designed bicycle touring shoes will last a long time. After all, they are designed for the job!

I tend to prefer a bikepacking shoe that is built to last. That's certainly the case with the MT5 Shimano shoes! This SPD MTB shoe might not be the lightest on the market, but it's going to last for years. They already have, actually! 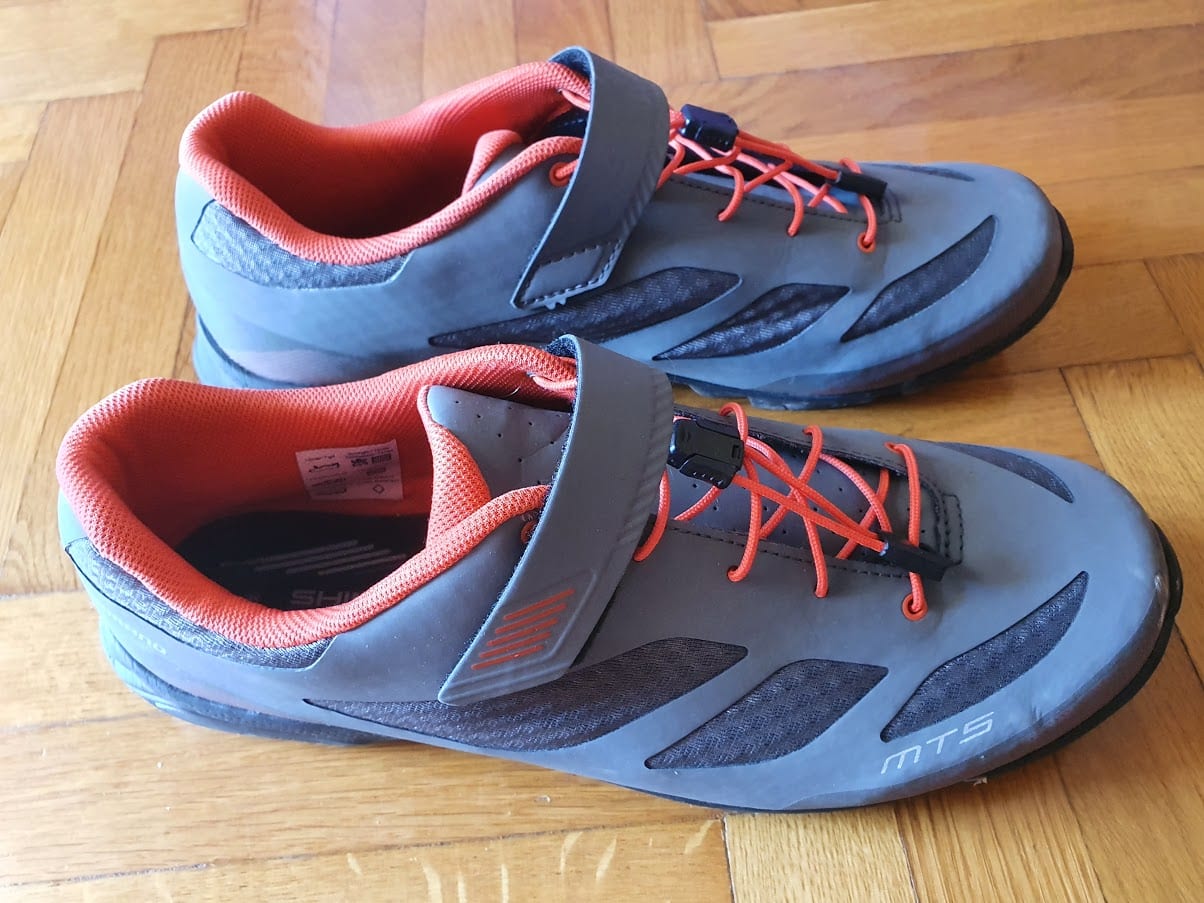 I find the MT5 touring cycling shoes are a comfortable fit, and I can use them on or off the bike.

I wouldn't just to do my city sightseeing in these Sh-Mt 5 shoes, but they're fine for walking around camp and quick trips on foot for supplies.

The speedlacing lock, and lace-tidy clip-hook are perhaps a bit gimmicky, (a little bit like reinventing the wheel if you'll forgive my cycling pun), but combined with the velcro strap it all works fine.

Here's a look at some of the best bike touring shoes available through Amazon.

Shimano offer a somewhat bewildering array of footwear. Actually, ALL their ranges including components are as equally bewildering!

The Shimano SH-MT3 Cycling Shoe is perhaps the pick of the bunch though. It's a versatile cycling shoe which also doubles as a reliable hiking shoe should the need arise.

The Cyclo Tour from Mavic

is another bike touring shoe worthy of consideration. In my opinion it's not quite up to the Shimano standard, but it is a little cheaper. 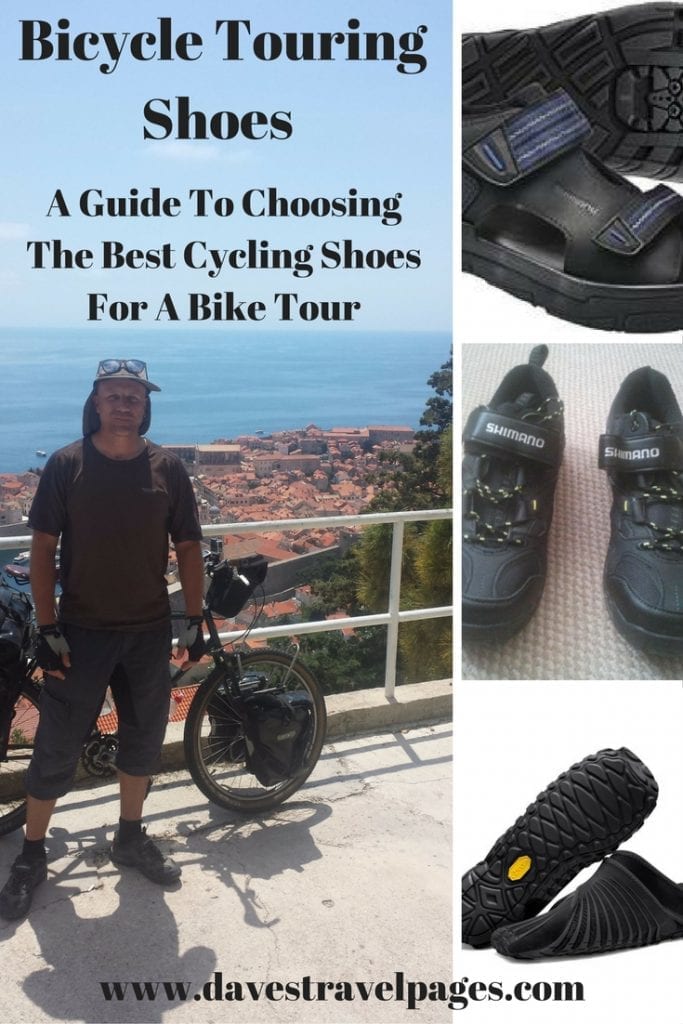 You can ride a bike in just about any type of shoe. The longer you ride a bike for though, the more you will appreciate bicycle touring shoes specifically designed for the job.

In my opinion, the best shoes for bicycle touring are recessed SPD type shoes. These help with the overall efficiency of cycling, and can also be used off the bike in most everyday scenarios.

I generally prefer a closed shoe as opposed to an open sandal type design, mainly because I don't like the idea of stubbing my toes! I then take along with me another set of footwear for days spent off the bike.

Do you have any thoughts to add or questions to ask regarding bicycle touring shoes? We would love to hear from you, so please leave a comment below.

FAQ About Shoes for Cycle Touring

Here are some commonly asked questions about shoes for bike tours.

What shoes for cycle touring?

A pair of stiff soled shoes is best for cycling, as less energy is lost when pedaling. Dedicated cycling shoes are best for more serious cyclists and especially bike touring, as they improve the efficiency and power output.

Do you need special shoes for cycling?

Casual cyclists do not need any specific shoes for cycling – anything will do! Dedicated cycling shoes with cleats do have advantages though, as they increase cycling efficiency by allowing the hamstrings to be used on the upstroke.

What is the point of cycling shoes?

Bike shoes that attach with cleats to the pedal are designed to increase cycling efficiency, especially on the upstroke as the hamstring can be used to its fullest potential. Cycling shoes typically have stiff soles to maximize the transfer of energy from your legs to the pedal.