Last Updated On October 10, 2019 by Dave Briggs Leave a Comment

Cycling in Ecuador is certainly rewarding in terms of scenery. This blog entry is from the day's ride between Cayambe and Quito as part of my Alaska to Argentina bike tour.

Leaving Cayambe through the main road running through the town, I was treated to some downhill, but the overall tone of the day was that of uphill cycling.

The road ran on the left hand side of a valley, whose ground had been additionally split by an earthquake, which I hope you can make out in this picture. 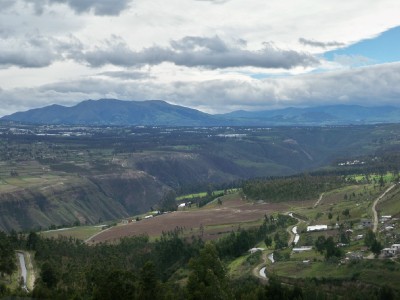 Along the way, I came up to the Equator. 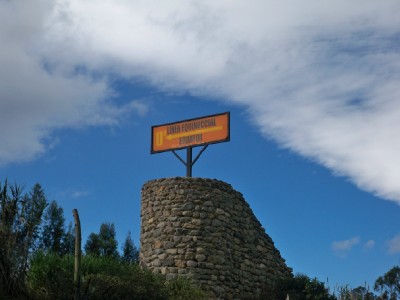 I have cycled over the Equator once before in Kenya, and have actually visited the Equator in Ecuador a few years back. This was a different spot though, and so of course a photo was obligatory. Apologies for my stuffed mannequin stance ! 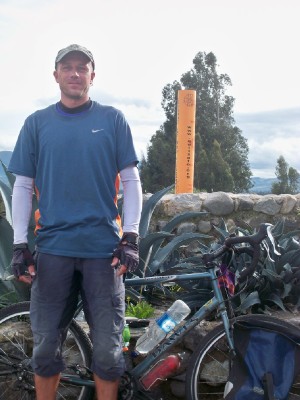 To think that I have cycled from the Arctic Circle to the Equator !!!

After that began a rather laborious uphill section towards Quito that seemed to last the rest of the day.

Being a Saturday, there were plenty of other road cyclists out, each one more amazed than the next that I was cycling up such steep angles, and in certain cases overtaking them !

As per usual, I was mapless on entering a big city, but had memorised what Google had to show me, and miraculously managed to find my way into the centre, and more specifically exactly to the hostal I had in mind to stay at.

Hostal Chicago was 13 dollars a night, quiet and with a good internet access. Time to put the bike in storage for a week and switch off from cycling !