Last Updated On August 20, 2021 by Dave Briggs Leave a Comment

During my 18 month bike tour from Alaska to Argentina, I took a week off in Quito, Ecuador. Here's what I got up to in Quito whilst resting.

Taking time off in Quito

What with the big rush of having to cycle through Colombia in 30 days due to a visa problem, I was looking forward to some time off in Quito.

Although the mountains of both Colombia and Ecuador have been absolutely stunning, its also been quite challenging cycling at times, and my legs certainly needed a rest ! 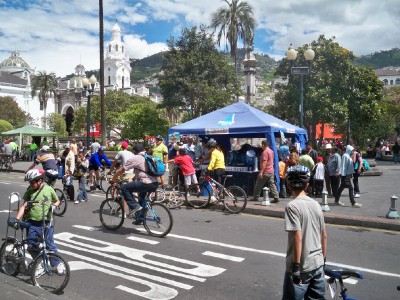 With the bike locked away in Hostal Chicagos storage room, I had every intention of switching off from cycling completely for a week.

However, on Sundays, the north / south road is blocked to all traffic except for cyclists, so it was a little difficult to ignore hundreds of cyclists pedalling along. On the main plaza, there was even a water station to keep everyone hydrated!

Quito has a somewhat unsavoury reputation among backpackers, as a place where its almost a certainty to either get robbed or have something stolen.

I had no problems whatsoever on my last visit here, and again on this visit, have only met friendly, helpful people.

I feel that sometimes, if you approach a city, or even problem in life with a negative mindset, then it will attract negativity to it.

That said, if you are a dumbass backpacker, drunk at 02.00 in the morning and flashing an I-phone around, you may as well paint a target on your back!

Maybe you should read this: Common Travel Mistakes And What Not To Do When Traveling

I’ve felt more and more I have less in common with backpackers over the years. Maybe its an age thing, or just simply the fact that cycling through a country gives me more of a unique insight than simply catching a bus from one big dot city or tourist sight to the next.

The main backpacker area in Quito is El Mariscal, which by all accounts is a huge tourist trap. The area that I stayed in was about one km away, closer to the old town.

There were no inflated prices here, and a desayuno, and almuerzo could be had for the usual price of one dollar fifty. A beer was a dollar twenty five for a big bottle, and there was even a KFC !!

So whilst I was in Quito, what did I do?? Well, there was sight seeing of course. 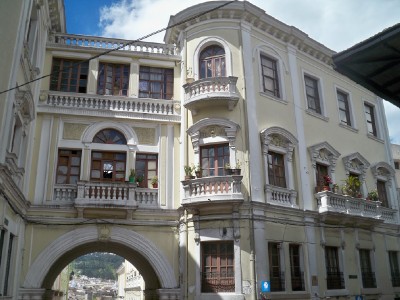 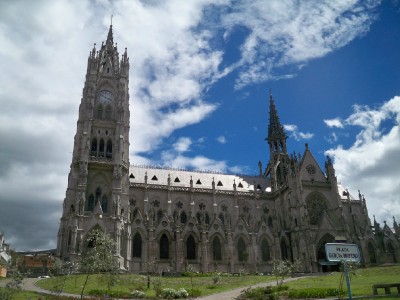 And the most enormous basilica. 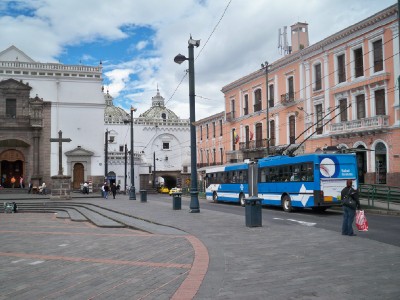 A “trolley” system runs through the city, costing just 25 cents to get on each line.

And whilst not doing that, there was laundry (my trousers hadn’t been washed in 5 weeks), repairs to the bike (minor), website updating (my other sites) and sorting out a small package to send home.

In addition, as well as spending some time online gaming with friends, I also downloaded and watched maybe a dozen films, saw the England game (hmmmm) and generally just relaxed.

With the route ahead to Cuenca (the next big city) planned, and a half decent map purchased, I aim to cycle out of Quito on Tuesday morning. And so until next time …..