Recovering from a bad stomach, I too another day off in Mulege, spending time with Warmshowers host Bill. Good to find out about the place I was passing through!

Feeling better, Bill took me around the town and introduced me to people whilst filling me in on background information.

An important part of this trip, has been getting to know people and finding out the stories behind the places I am cycling through, rather than just blasting past and ticking it off from a list.

A strong hurricane had hit Mulege only a few months before, and many houses and businesses were destroyed by the ensuing floods.

Although the government responded quickly in getting the main road in and out of the town cleared, the towns infrastructure is still suffering, as there has really been no coordinated effort to help clean things up.

Insurance companies have not paid out, and people are left to their own devices to repair their homes and businesses. Trees are still left ripped from the ground and roads are ungraded.

Apparently a hurricane hits every year, and so by the time the people have cleared up from the last one, the next one strikes.

When cycling past towns like this, I can obviously see that it is a bit shabby, but now I know why! 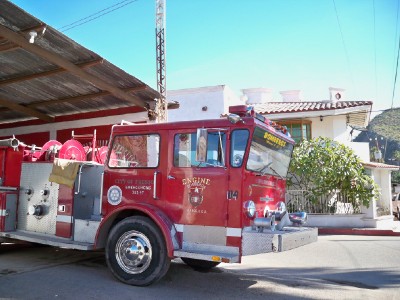 The Bomberos in Mulege

This firetruck was donated by a town in the US for the local Mulege Volunteer Fire Service… The Bomberos. Because of red tape, five thousand dollars ‘tax' had to be paid.

Whilst in town, I noticed a small house for rent for $150 a month. I pointed it out to Bill, and how I was looking to take a few weeks out to relax, recharge and do some work on my internet projects.

Renting a room in Mulege

One thing led to another, and I am now renting a room at Bill's house for $100 dollars for two weeks. Its an arrangement that works out well for both of us, as I get a place with TV and internet, and Bill gets some ready cash.

So, I'll be taking two weeks off here, and will resume cycling about the 4th of December. Keep visiting though, as I'll still be updating via Twitter and tweaking the site!