On this day of the PanAmerican bike tour, we officially entered Guatemala to continue the cycling adventure. Here's my bike touring blog from the day.

I didn't feel too bad, considering the amount of kilometres cycled the previous day, but that said, another long day wasn't on the cards either. Today though, we first had to cross from Frontera Corozal Chiapas (Mexico) over the river to Guatemala.

Oliver and I left at about 08.00, and headed first to immigration to be stamped out, which proved to be swift and efficient. Then, it was down to the river, where we needed to get a lancha over to the Guatemalan side. 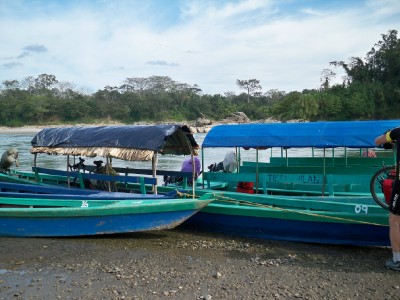 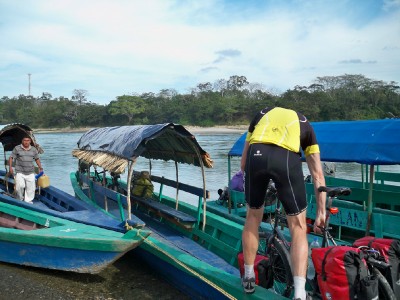 My bike is already on the lancha in this picture, as Oliver loads his.

Eventually both bikes were loaded. 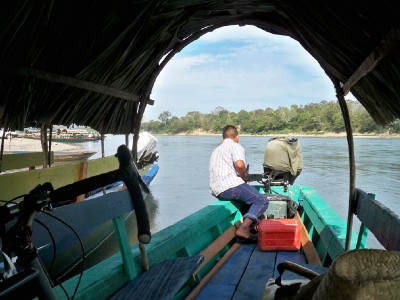 And then the ‘Captain' scrambled past to start up the motor.

It was a bit of fun loading the bicycles onto the lancha, and the actual journey over to the other side took less than ten minutes.

Then, a not so enjoyable carrying of bicycles and trailer up the embankment, and then we hit our first road in Guatemala. And quite a rough and hilly thing it was too!

That it took us two hours to cover just 15 kms was probably not the greatest morale booster on what was an outrageously hot day, but we arrived in Bethel before lunch.

Asking around, we eventually found a Hospedeja (El Rodeo – class) for 80 Quetzales for the night. Then, it was just a matter of relaxing the afternoon away, and trying to avoid the heat!