Last Updated On June 5, 2019 by Dave Briggs Leave a Comment

This blog post covers the section of cycling from Bethel to Flores during my Pan Am cycle ride. You can check out my blogs from the road here – Cycling the Pan-American Highway.

Cycling from Bethel to Flores 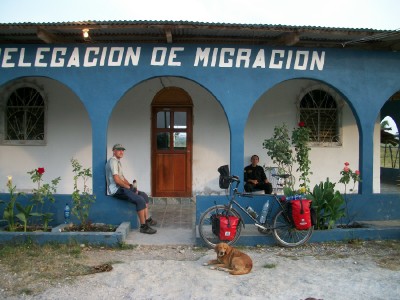 Thankfully, it wasn't as hot today as it was the day before, which was just as well, as there was some tough cycling ahead. We got an early start, and covered the first three kilometres of rough road to the immigration building in good time.

There was one security guard on duty, who had to wake the official up inside, who was evidently having a bit of a lay in.

Expecting a grumpy, half asleep immigration officer, we were pleasantly welcomed into Guatemala by a bubbly, friendly guy.

Sometimes, I wonder where the rumours of corrupt border officials come from. You would have had to have been incredibly obnoxious to annoy this guy to the point that he would have started inventing entry taxes.

Anyhow, with a 90 day visa stamped into the passport, and a lot of kilometres to cover, it was time to get going.

Cycling from Bethel Crossing to Flores

For the first 65 kms, the roads were pretty awful. Over the years, I've cycled thousands of miles of rough, dirt roads, but this one was pretty special.

Lumps of limestone rocks with a mixture of fine gravel and pebbles called for some attentive cycling, and a little less air in the tyres than I would normally have.

For the first time on all my cycling travels I fell off, when a couple of dogs came running at me as I rounded a corner on some loose gravel.

It was a pretty unspectacular 1 km an hour crash, where my pride was hurt more than anything else. Still, I am sure it proved amusing to the dogs, who seemed to go back to their farm with a contented wag of their tails.

The incident inspired me to write an article about dealing with aggressive dogs on a bicycle tour. 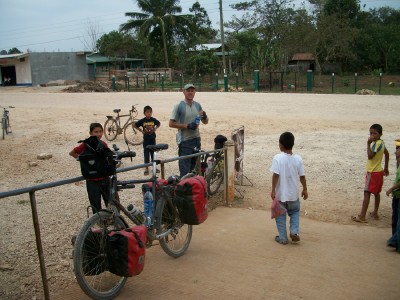 A quick water stop in a small town soon brought out a small group of curious local children and adults alike.

We covered 65 kms of this rough stuff to the town of Las Cruces, where after a fortifying pepsi and Quesadilla, we got back on the road again.

A long day of 140 kms covered, but we made Flores and located a pretty good hotel where we decided to base ourselves for a couple of days.