Crossing over the border from Belize into Guatemala, my next destination on this backpacking trip was Tikal. Here's my travel blog post from backpacking Guatemala. 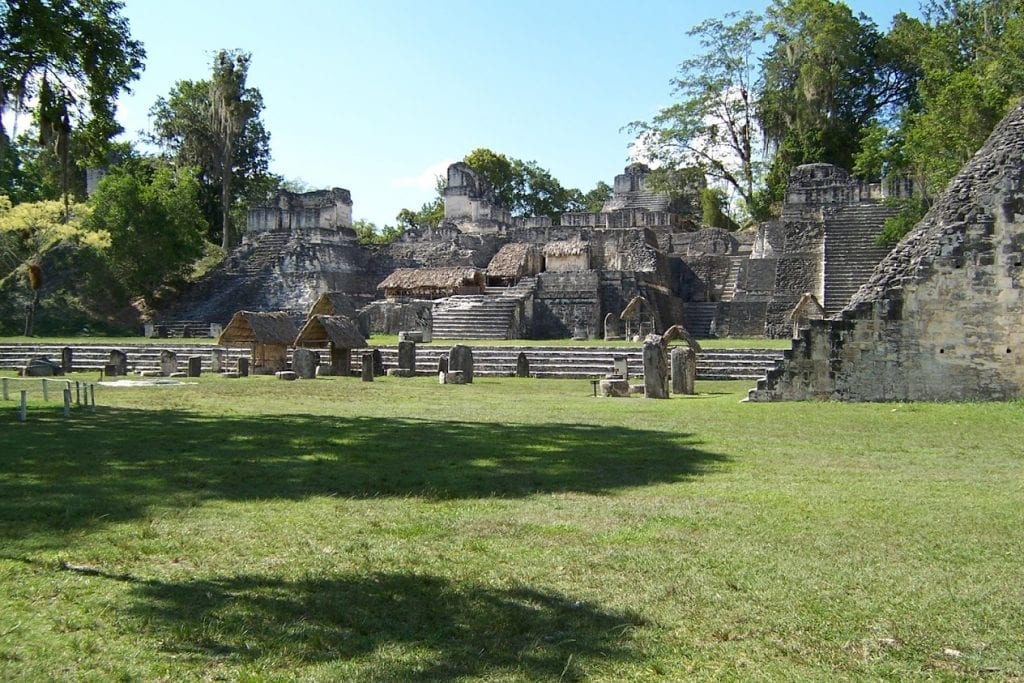 A note before I begin: This travelogue update covers my time in Guatemala during my 2005 backpacking trip through Central and South America.

Driving to Tikal from Belize

We swapped cars after crossing the border from Belize, and headed for Tikal with the slowest driver I’ve ever encountered.

As we entered the national park, the driver came out with the usual bullshit about us having to pay some extra for no readily explainable reason.

My Spanish wasn’t quite good enough to tell him to go and fornicate with himself, but he seemed to get the message.  The last few kilometres were a bit silent!

We dumped our crap off, and then due to a series of minor logistical errors, Mark had to go to Flores to use a cash machine, so I wandered around the site of Tikal. 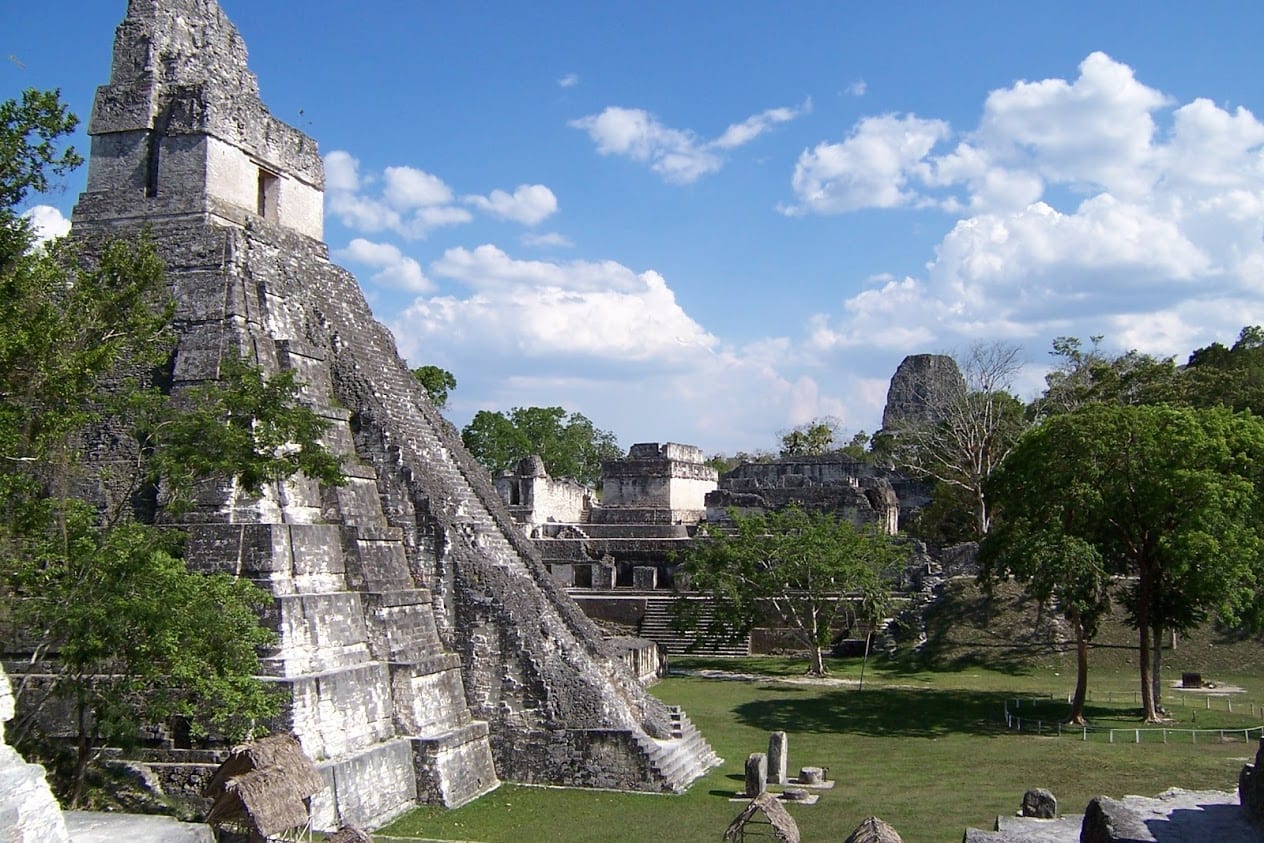 What a beautiful place! It was after two when I started , and I barely saw a soul there.

It was so nice to sit on the temples and look out at the surrounding jungle and only hear the noise of monkeys and parrots rather than a hundred loud tourists. Quite magical. 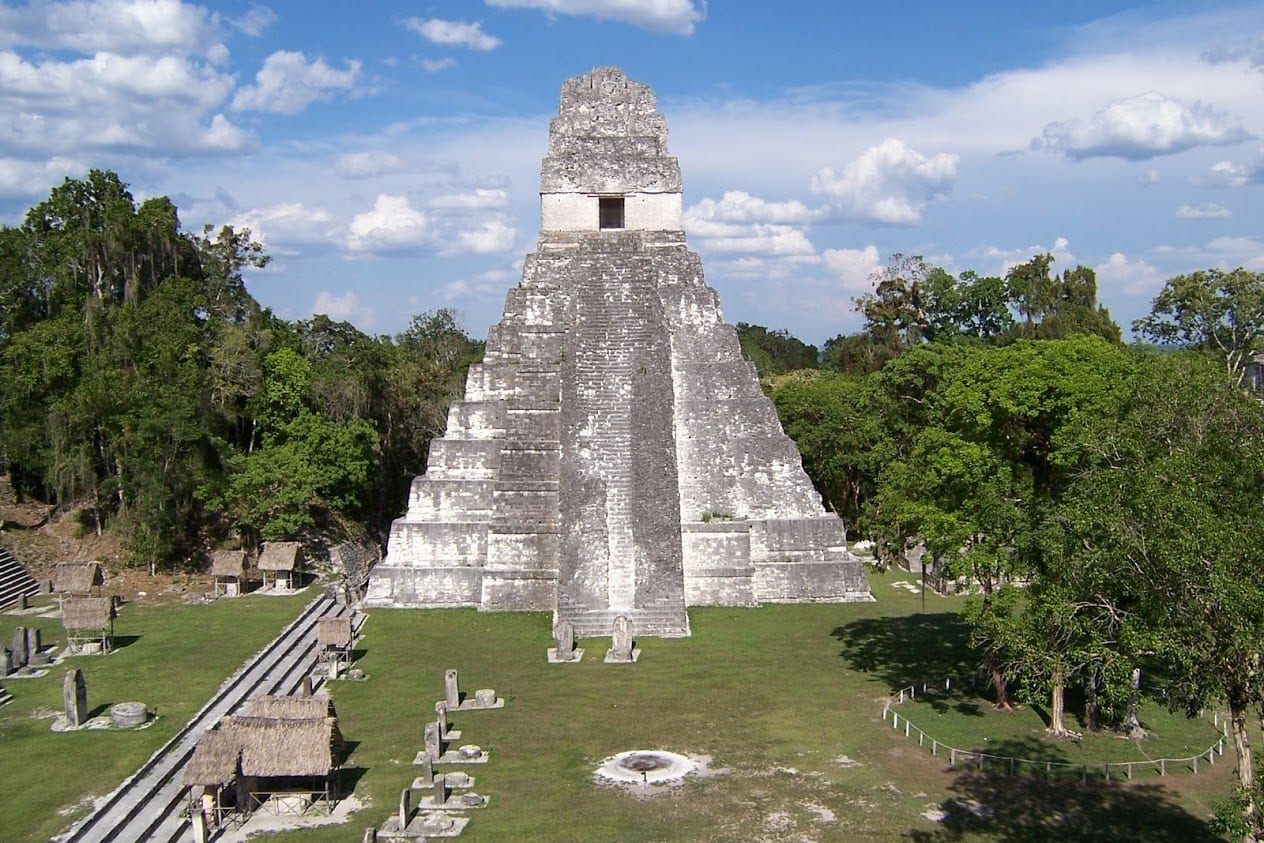 Mark got his money ok, and we had dinner with a Swedish couple who were sound people. 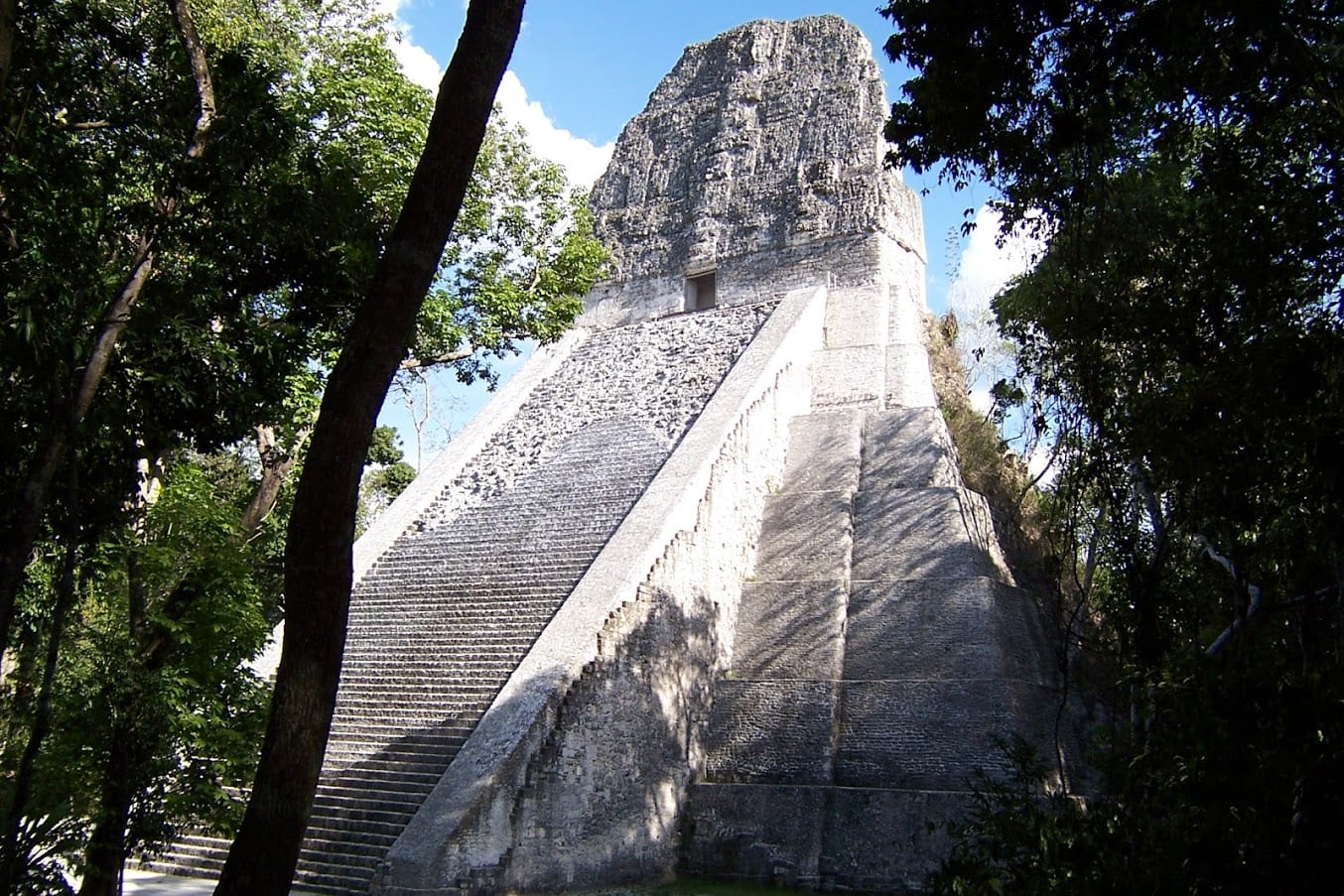 Got up early the following day to see the sunrise at Tikal from one of the temples. It was quite misty, but still very good. Had another wander around the site, and then got ready to leave for Flores.

After Flores, I decided to make a change to my plans, and headed for Rio Dulce. The bus was halfway between a ‘chicken bus’ and a normal one, but as there were only ten people on it, it was an easy ride.

Arrived in Rio Dulce at 2.00, but the were no boats available to take me over to Livingston, so I booked one for the following day, and stayed at a place called Bruno’s, which acts as a sort of hub for yachties and backpackers.

Wed 8th, and the water taxi to Livingston was a bit bizarre to start off with. It did a cross between a site seeing trip, and pick ups at other places before returning to the dock where we started, to sit for no readily explainable reason for a further ten minutes before heading off.

The journey along the Rio Dulce (Rio means river by the way!) was quite good, with the gorge walls covered in greenery, and at one spot, a thermally active area with hot pools.

On arrival at the town of Livingston, only reachable by boat, I booked in at the Hotel Rio Dulce. If it was described in a guidebook, it would probably read something like ‘has rustic charm’, ie pretty basic.

However, the room was nice and airy, with a hammock outside, and if you could ignore the fact that whenever you walked upstairs the whole wooden building shook, or that the water came out of the showers in a dribble, it was fine.

The humidity had all but disappeared due to a couple of big thunderstorms, which was a welcome relief.

Livingston itself was so small, that it’s barely worth describing. In a way, it was similar to Caye Caulker in Belize, especially with the laid back attitude of the people. There was one main street, which consists of a collection of restaurants, hotels, souvenir shops and pharmacies.

Time off in Livingston

In all, I managed to spend three nights there, doing nothing but swinging in my hammock, getting some sun and eating in restaurants…Yes, it’s a hard life!

I watched Guatemala play Costa Rica on T.V. in one of the cafes, and Guatemala lost 3-2 in the last minute which was a shame. Good to see that football fans reactions are the same the world over though.

Quite a few little things happened to make the stay enjoyable. A guy wandering around blowing a conch shell and getting women to dance to the rhythm, another guy dressed in red robes and carrying a staff, who obviously thought he was some sort of priest. The usual collection of oddballs and weirdo’s who are my fellow travellers, some of whom were interesting to talk too, others only interesting to look at.

There was one older guy from England who had travelled through Africa who had the sort of stories that make me want to do this sort of thing forever.

Oh yeh, forgot to mention my first encounter with the Guatemalan hot water system. It basically consists of a few electrical wires taped ineptly to the end of the shower head, which then somehow heats the water as it passes through.

It looked reasonable enough, and for the first few minutes it performed wonderfully. However, just as I was washing my testicles, there was a gigantic explosion, so I stuck to cold showers from then on!

Time to move on

When I moved on, Sat 11th, I caught an early boat to Puerto Barrios, and then managed to grab a bus going to Chiquimula. Guatemalan bus journeys are quite odd, because they never really have a start point or time as such.

The bus will usually sitting there with the ticket collector shouting it’s destination for fifteen minutes before it’s due to depart. Then, the guy that’s been asleep across the rear seats will move to the front and start the engine as the hint for everyone to get on board.

You think that you’ll be off relatively soon, but really it’s just a ploy to get fifty people in a confined space so that they can sweat together for fifteen minutes.

Then, the bus pulls forwards six feet, before suddenly stopping so that the ticket collector can go and buy his breakfast (obviously , there was no way he could have done this before.)

Then, it starts off again, only to stop in the middle of the road whilst the driver talks to the driver of another bus coming in the opposite direction.

And all that without the general lack of road rules, consideration for other drivers and badly tuned in radios blasting out music on full volume makes for an enjoyable trip!

By the way, UB40 seems to be the most popular band in Guatemala, as wherever you go, you can guarantee it will be playing somewhere.
Anyhow, the bus finally got moving, and then I eventually carried on through to Honduras. 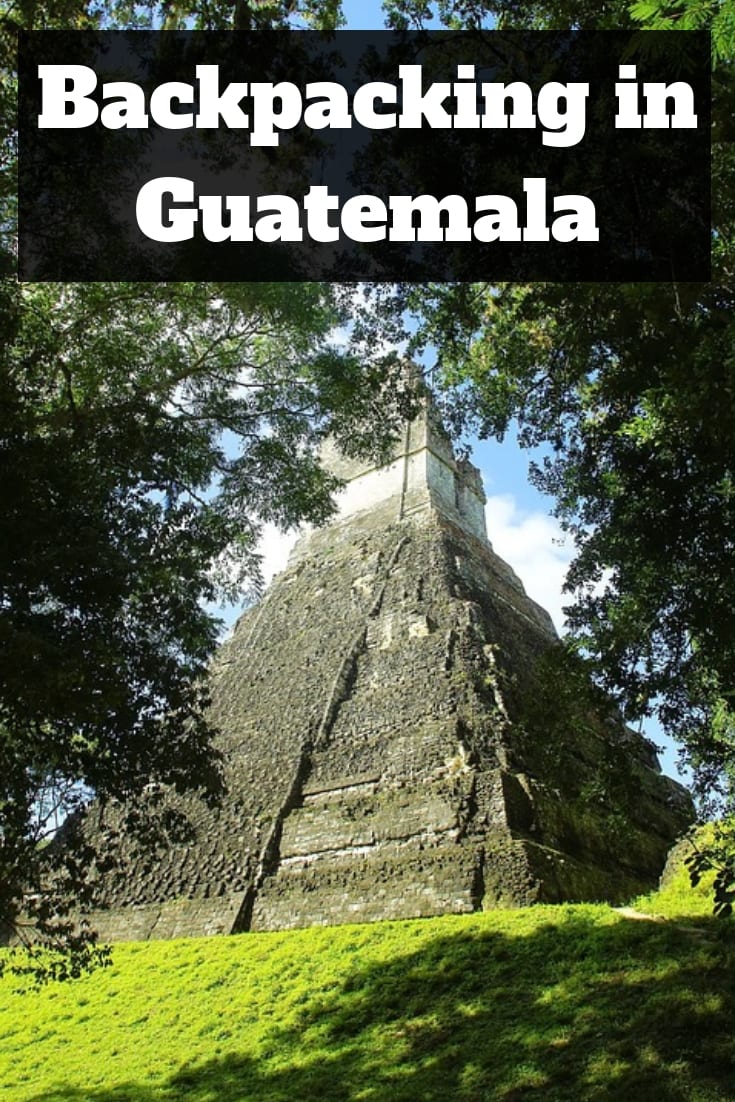