Not the best nights sleep, what with the two hour tropical storm, and a couple of earth tremors.

On a positive note, it seems that the tent is to a degree waterproof, so third time lucky!

Cycling out of a volcano

The day's cycling began with an ascent back up out of the crater, something that I wasn’t looking forwards too, but wasn’t all that bad.

Once at the top, the road dipped back down to the town of El Congo, and then when I turned right, towards the Cerra Verde national park, it climbed up once more.

The road followed almost the top edge of the crater, giving some stunning views down onto the lake below. 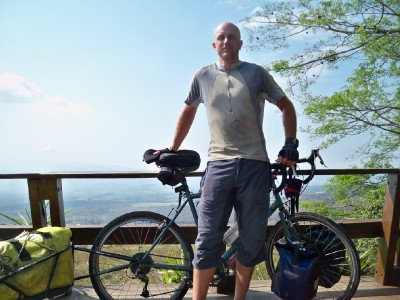 Just as I started the descent away from the crater, I felt a car hovering behind me.

With a ‘What the fuck do you want’, I looked behind, and noticed it was a news crew, who then overtook me and pulled in front.

After waving me down, I was then asked to give an interview.

Wisely declining to answer in Spanish, and replying in English, the Channel 37 news interview lasted about five minutes.

I’m not sure what the viewing figures are normally like for the channel 37 news, but I am sure they will spike when that little beauty is shown!

Note to self – The next time I am interviewed by an El Salvadorian news team, remember to plug the website.

I continued on my descent, and paused at the turn off to the Cerra Verde national park. 16 kms within, two volcanoes easily hiked in half a day lay.

I decided against it in the end, as I didn’t really want to cycle all the way in and find that no accommodation or only expensive accommodation was available. Its always there for the next time I am in this part of the world! 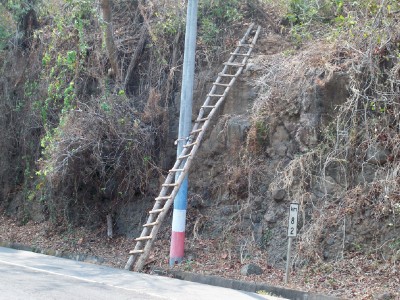 I saw this interesting ladder along the way. I really like how the wood curves and twists!

After that, it was pretty much all downhill into the coastal town of Acujutla, where I had hoped to spend the night.

A quick scout around however did not produce favourable results, and although I had been cycling for five hours, it was only 12.00 What the hell…. Push on !! 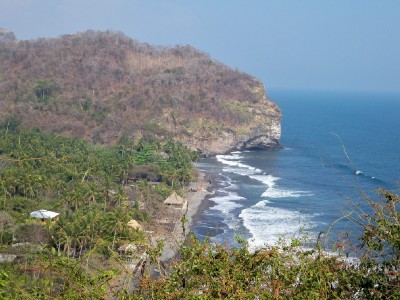 I’m not sure it was the wisest decision though, because the following 70 kms were over some brutal hills, which put my sweat glands into overdrive.

The views of the ocean were pretty amazing, and its important no matter how hot, tired and against the clock I am, to take time out to  savour them. There were also five tunnels to cycle through, the first since the USA. 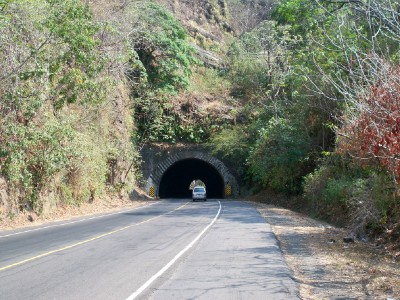 Eventually, nearing the ends of my reserves, I turned off onto Playa Sunzal, and headed for the beach front.

Asking a random if there was anywhere to stay, he said yes, but that it was peligroso (dangerous).

There was no way I could cycle even another 50 metres, so I dived into the first place where a dodgy looking bloke said he had rooms. The room was probably worth 5 of the 10 dollars I paid, but the chicken dinner more than made up for it ! 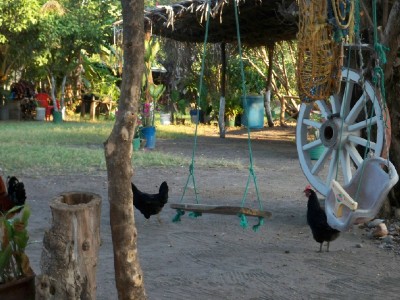 Its always good to know where dinner is coming from !!