On this day of my bike tour from Alaska to Argentina, I cycled from Santa Ana to Lago Coatepeque in El Salvador. Here's my bike touring blog post. 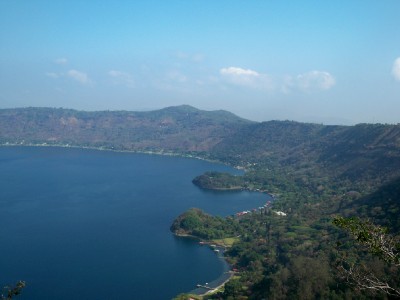 So, after a couple of days off in Santa Ana, it was time to move on.

Thanks to Google maps (which is making life a little easier considering my general mapless state), I had worked out a route from the city.

That was good, because as I discovered, road signing in both Guatemala and El Salvador is an art form yet to be discovered!

My destination was Lago Coatepeque, a lake set in a volcano crater. Getting there was fairly straight forwards, even with a puncture to contend with.

I may have made a slight error in judgement, because i thought that the road carried on from the lake, but it does not.

This means that tomorrow, I will have to cycle back up what was a glorious fun filled descent. I somehow think that I wont be feeling the same sensation of joy in the morning as I sweat back up it.

Still, the lake is beautiful, ringed by the second homes of El Salvador's elite, with a small strip of accommodation options.

They wanted too much to stay in most of them, but I managed to come to a deal at Rancho Alegre for 5 bucks to camp.

The lake is big enough to have a noticeable tide, and when a helicopter hovered close by, landed on water wings, paused as the occupants gave a wave, and took off again, someone said it was the El Presidente.

As always, my piss poor research couldn't even tell you who the president is, so I will just go with what they said.

This is the first night in tent number three since buying it in San Cristobal. Third time lucky !!!! 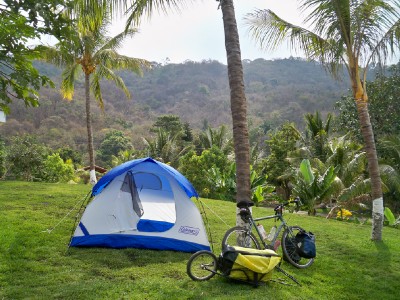