If you're looking for a short break destination in Europe for outdoor activities, it's time to consider Luxembourg. This small country is ideal for outdoor lovers who want a long weekend break off the beaten path right in the heart of Europe. 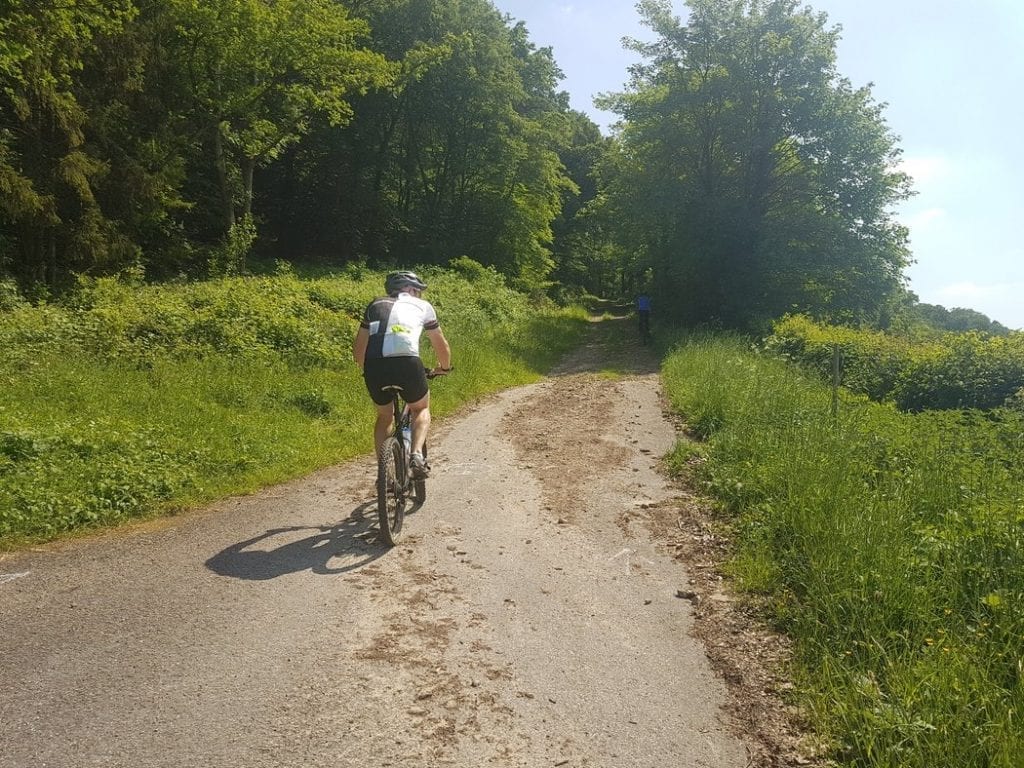 Now, I'll be the first to admit that pairing the words ‘Luxembourg' and ‘outdoor adventure' seems a little unusual! The reason for this, is that many people have a set image of Luxembourg in their heads which is far removed from the reality.

Most people tend to think Luxembourg is a small city-state, but instead it's a country with a surprising amount of lush, green countryside. In fact, you can read more about it in my recent blog post – Fun facts about Luxembourg. 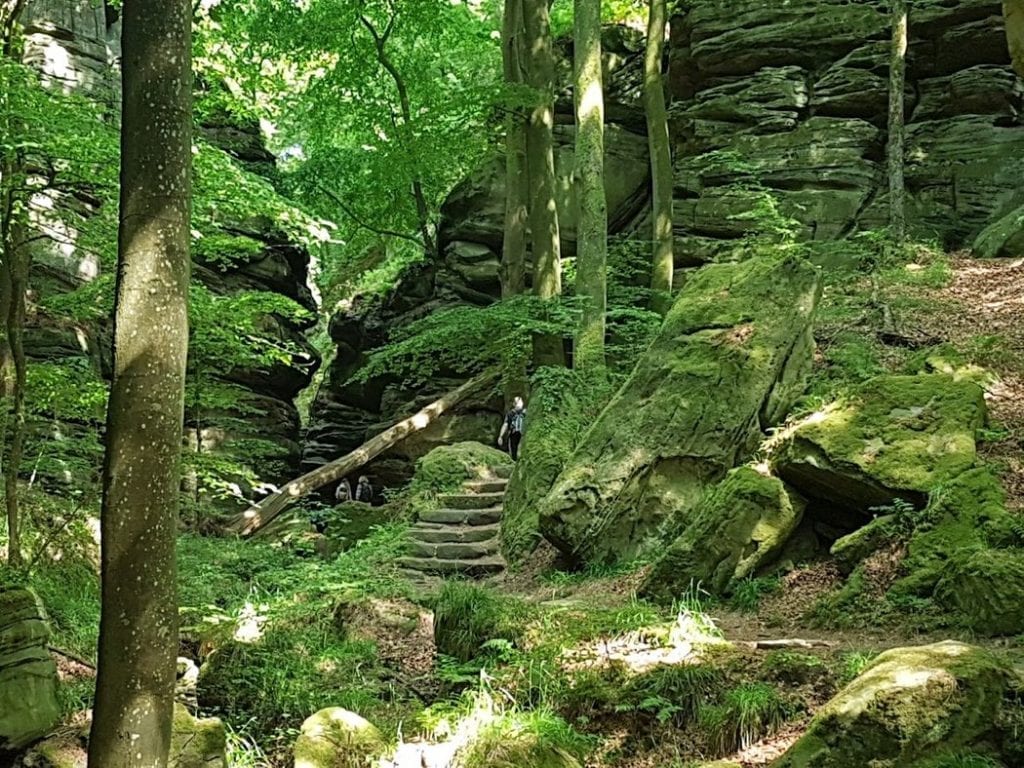 A lot of this countryside is given over to national parks and forests, meaning there are great opportunities for outdoor adventure in Luxembourg.

Having recently spent 3 nights (kind of 3.5 days) there, I thought I'd share my experiences. This might act as a starting point if you are planning your own trip to Luxembourg.

So, I should start off with how I got to Luxembourg! As you may know, I currently live in Greece. This meant that unlike many people who live in Europe, driving to Luxembourg was not really on the cards. Instead, I flew into Luxembourg airport with Swiss Air, with a brief stop in Zurich.

People travelling from the south of England to Luxembourg could theoretically make the drive there using either the Chunnel or ferry within a few hours.

My trip to Luxembourg was organised by the Luxembourg tourism board in partnership with local tourism authorities. As such, a lot of my transport was organised for me. I do have one useful hint though.

If you are travelling to Luxembourg without your own transport you simply HAVE to get the Luxembourg card! It offers quite simply ridiculous value for money. At the time I visited, it cost just 28 Euro, and for that there was free admission to over 60 attractions, and free public transport throughout the country. Find out more at www.visitluxembourg.com.

After landing at the airport, I found the person meeting me, and we then drove over to Camping Kengert in the Mullerthal region. Home for the next two nights would be one of the onsite cabins. It was only me in the cabin, but they looked perfect for groups of friends travelling together. It would also be a good place to stay if hiking part of the Mullerthal Trail in Luxembourg.

No rest… time for cycling!

There wasn't time to put the feet up though! After a quick change, it was on to the first outdoor activity in Luxembourg. Cycling!

As you may know if you are a regular reader of this travel blog, cycling is one of my main passions. Well, actually that's not entirely true. My main passion is travelling by bicycle. This means that to be perfectly honest, although I've cycled tens of thousands of miles around the world, my experience of road cycling or single track MTB riding is quite limited.

Fortunately, the cycling was very easy, with a couple of fun and challenging bits thrown in for good measure. It ended up being a guided MTB ride around Larochette on hired mountain bikes, and you can catch some of the highlights in this video. (There are also some clips from a second, more challenging day's ride I did).

After the cycling was over and a well deserved shower was taken, we then went out for an evening meal at Restaurant A Guddesch in nearby Mersch. The meal was nice by Northern European standards (I'm pretty spoilt for the quality of food here in Greece!), but it was made all the more memorable by meeting local blogger Jonny of https://daisythebus.com/.

He was a real star throughout my time in Luxembourg, and I even ended up having lunch at his house after a bike ride the following day. An absolute legend, and super-knowledgeable about things to do in Luxembourg as well. My eternal thanks!

With the meal over, day 1 came to an end, and it was time to hit the sack before the next day began.

My second day in Luxembourg was my favourite. I had arranged with the bike hire company to keep the bike an extra day, and met up with Jonny and local rider Iain for a day's ride. 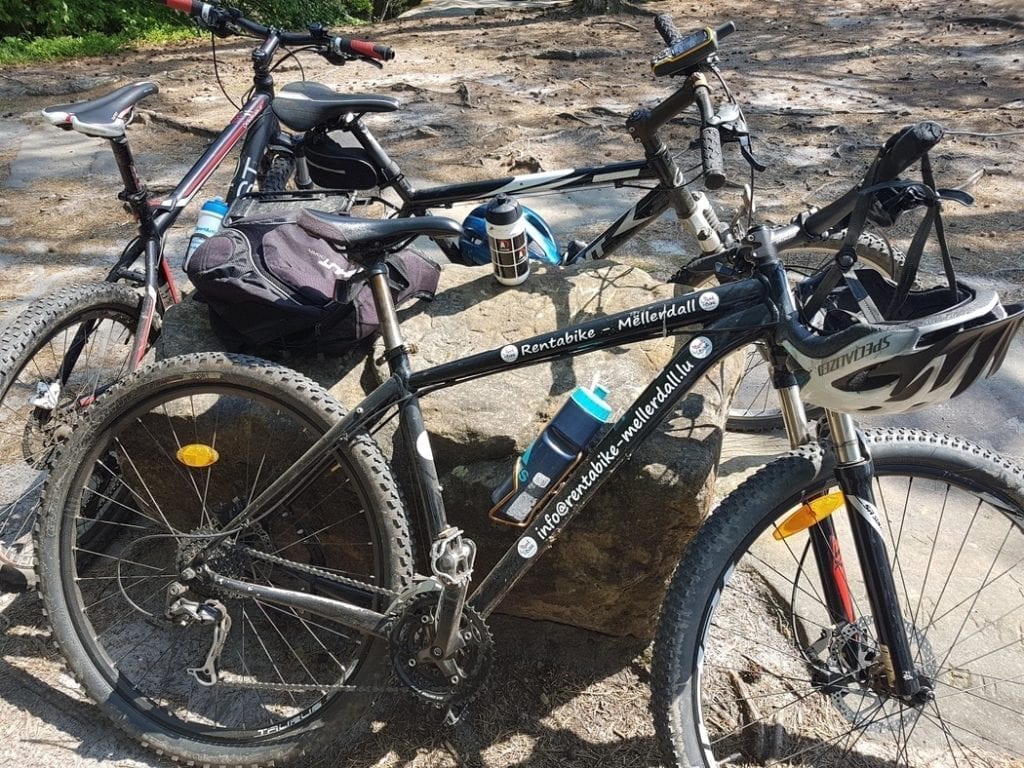 Our route followed parts of the Mullerthal Trail, and also ventured along the road and through small villages. I have to say that cycling in Luxembourg is a really pleasant experience, and it would appeal to MTBers and roadies alike. 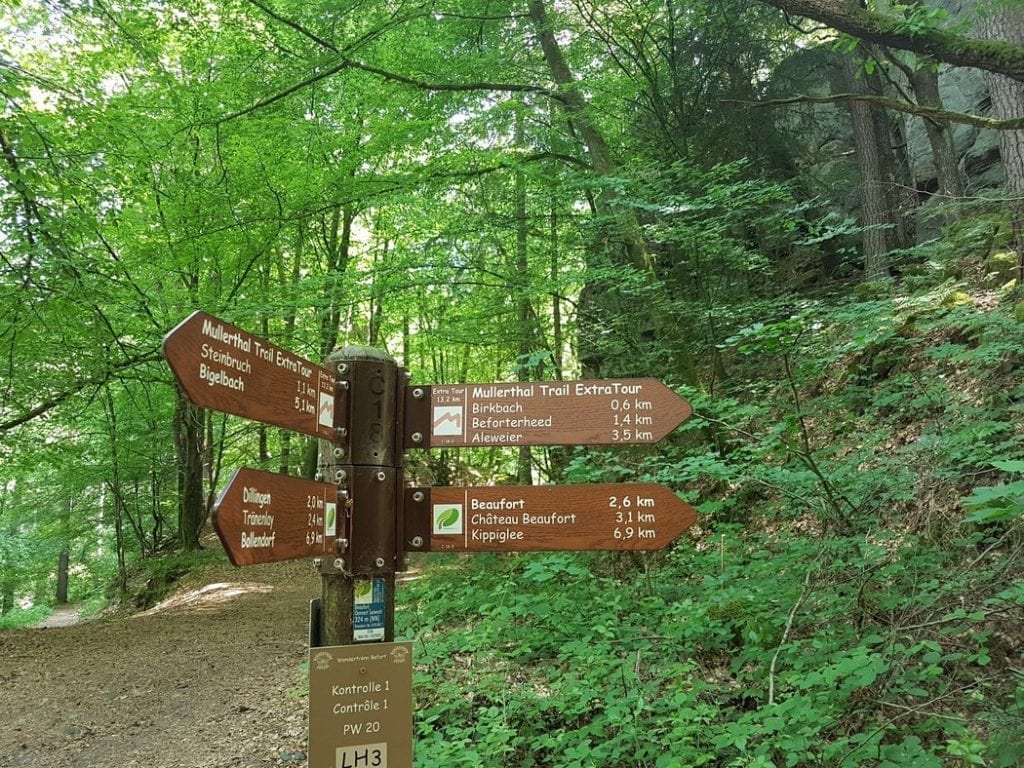 All throughout the day's ride in Luxembourg, I was astounded by the sheer amount of greenery all around. This feeling was added to when Jonny took us to a ‘secret' grotto. OK, it's probably not that much of a secret to the locals, but it came as a surprise to me!

First though, I had to squeeze through a narrow passageway… 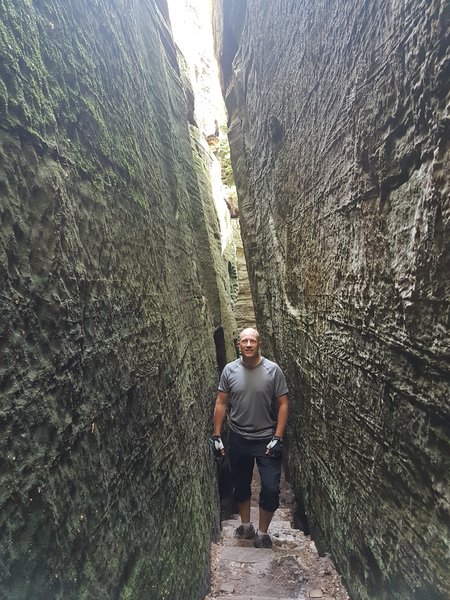 … and when I did, an incredibly green oasis was waiting! 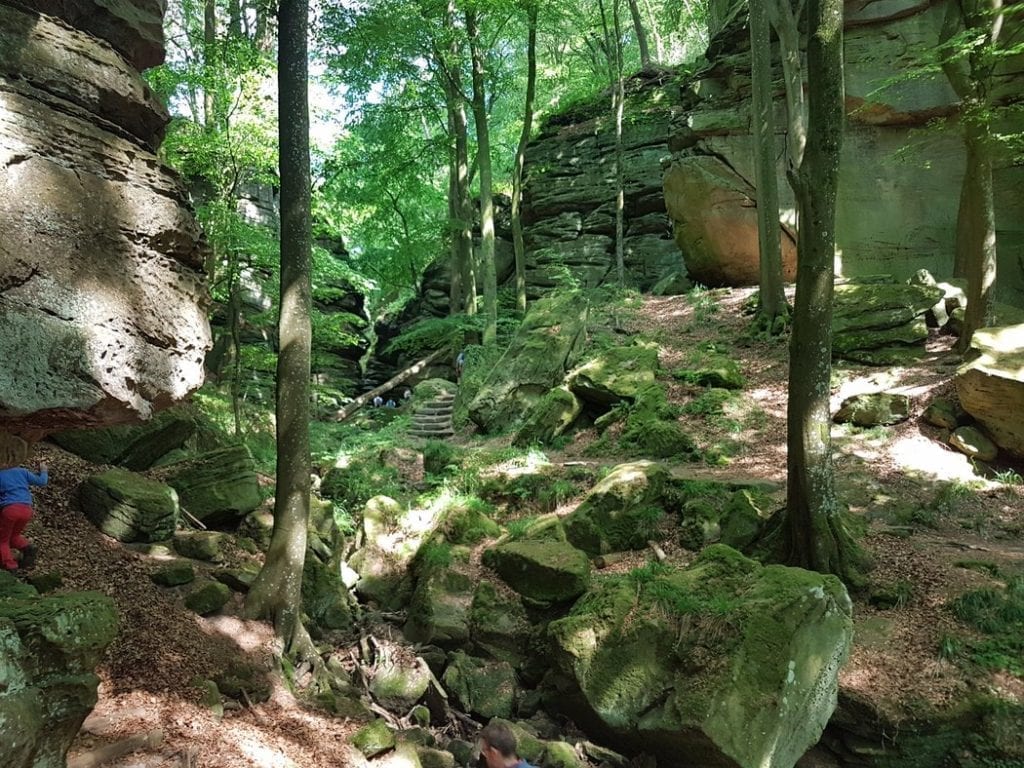 This place was really stunning, and a highlight of the trip. With a stop for lunch and a well deserved cold drink at Jonny's house, the day's ride was over all too soon. The next time I cycle across Europe, I will definitely be adding a detour so I can cycle through Luxembourg!

I checked out of the campsite, and whilst my bags were transferred to the next place, I was then dropped off at Hoscheid Village. From here, I would join the Escapardenne Lee Trail, and hike a 15km section to Kautenbach. 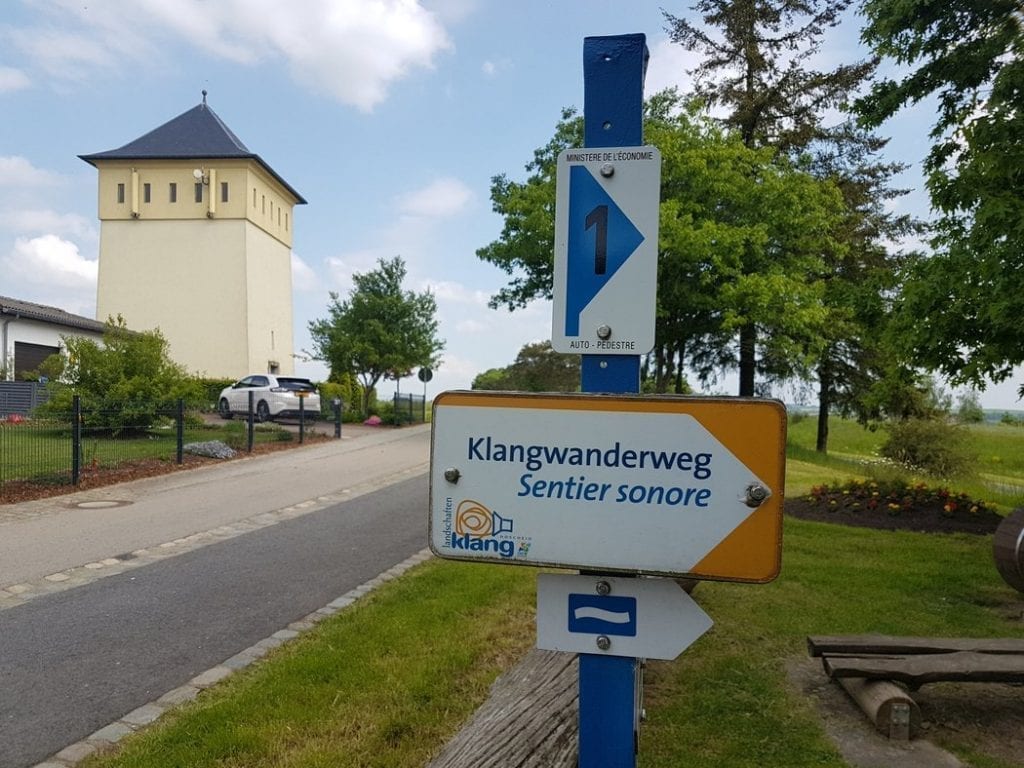 The track was well signposted, and this section could (maybe) also have been called the Klangwanderweg. Actually, I'm not 100% certain on that – maybe someone with better knowledge could leave a comment below!

This part of the hiking trail had a total vertical gain of 528 metres and took around 4.5 hours to complete with plenty of stops for photos. It followed some rocky ridges, wooded valleys, and farmers fields. In a way, I got to see almost every aspect of the Luxembourg landscape in one day!

Music and games anyone?

One extremely cool thing about this hiking trail in Luxembourg, was that every now and again, I would come across interactive puzzles, games and musical instruments. Below, there is a type of xylophone, but there were many others to play with as well! If you decide to hike this trail in Luxembourg, don't just walk by them – they are fun to use! 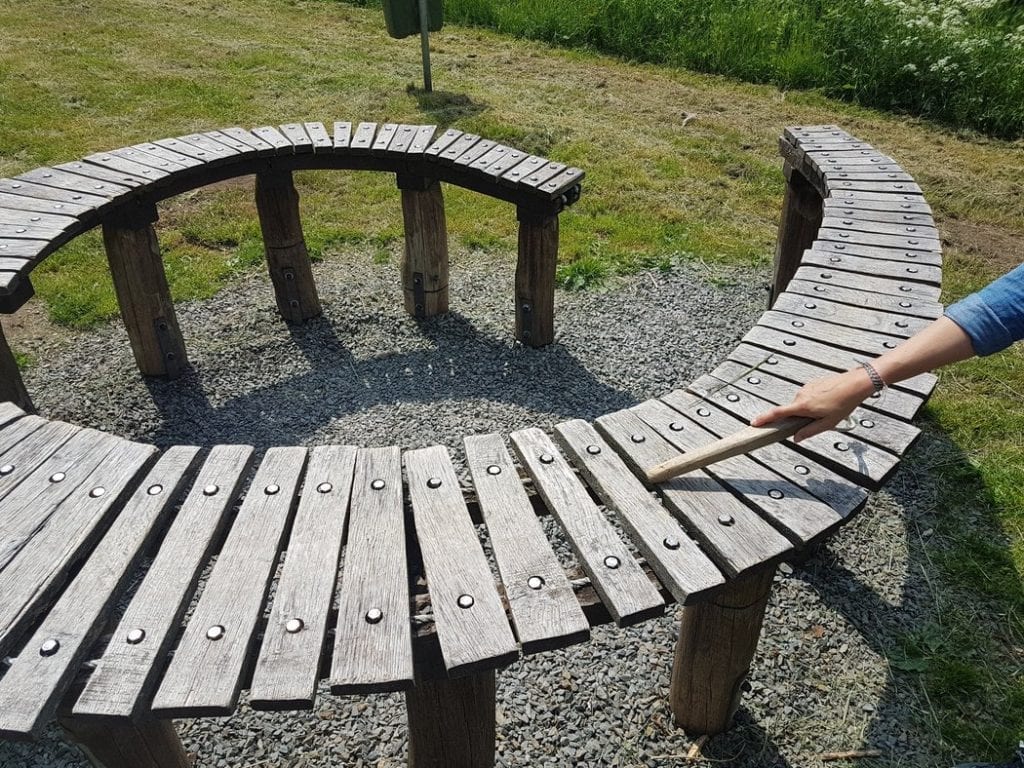 The walk was a really nice one, and suitable for people of most fitness levels. From memory, there weren't a lot of places to buy food and drinks along the way, so packing a water bottle and a few snacks is a wise move. And a rain coat – All that green in Luxembourg doesn't appear as if by magic you know! 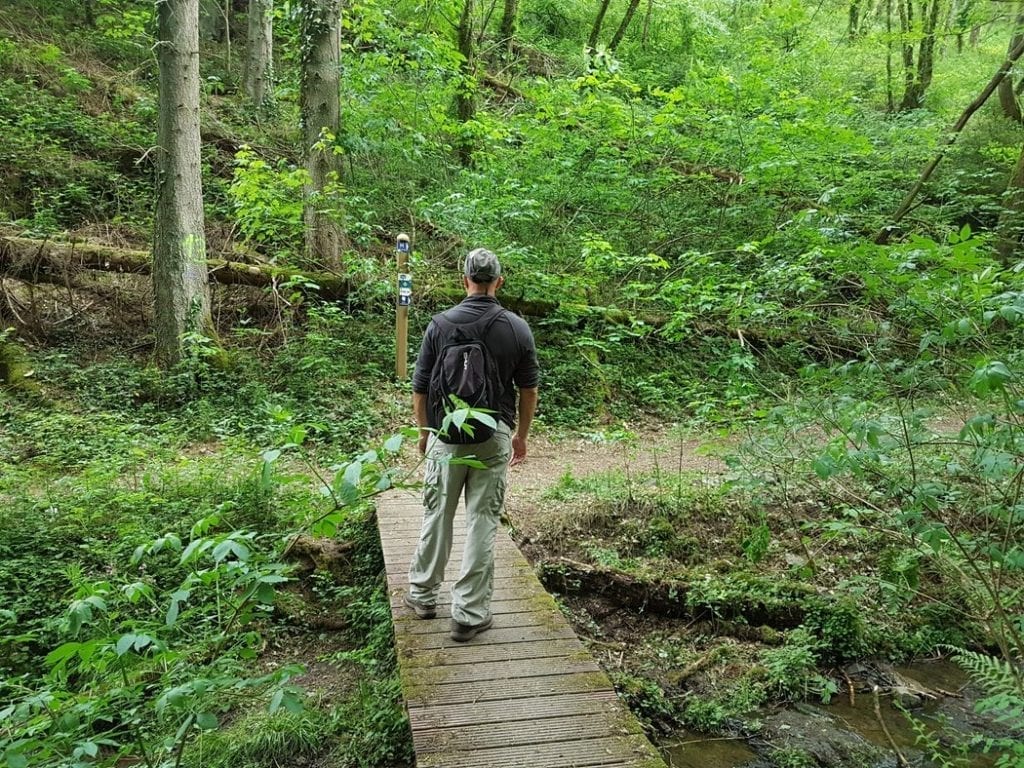 Train from Kautenbach to Wiltz

At the end of my day's hike, I descended into the town of Kautenbach, and then took the train over to the bigger town of Wiltz. Here, I stayed in an incredible glamping lodge, which I totally forgot to take a photo of! A bit of a noob error on my part. Take my word for it though, it was VERY nice! You could find out more here – Camping Kaul in Wiltz.

And that pretty much brought my travels through Luxembourg to an end. After staying the night, all that remained was to take the train back to the city and the airport and fly back home!

Want to find out more about Luxembourg?

I think this article should give you a good taste of what is possible for outdoor activities in Luxembourg, but don't think it ends there. I never even looked into kayaking, canyoning, paragliding or even scuba diving. Yes, scuba diving!

Feel free to use the resources I've already mentioned to find out more about planning a trip to Luxembourg. If you have any questions, or would like to add something to this travel guide, then please leave a comment below.

Pin this Luxembourg guide for later 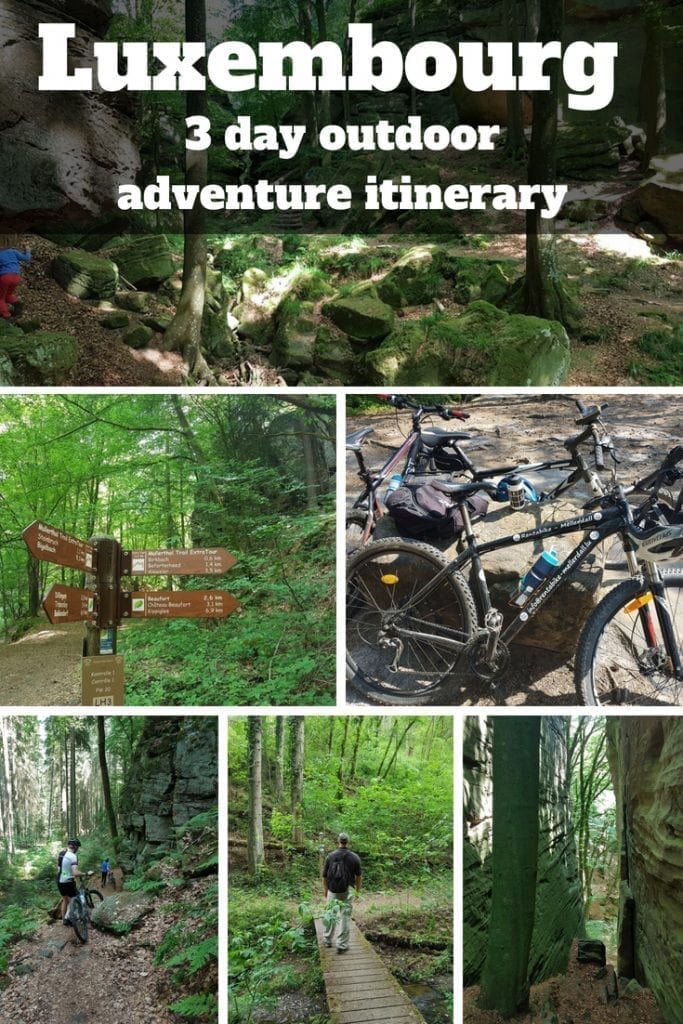