Today, I cycled from one lake to another in Canada as I headed towards the Canadian border  with the USA. There seems to be a lot of lakes in Canada!

It was a cold night, but there were clear blue skies, and the wind was still in the morning. After breakfast of my new favourite, cold oats with raisins, I hit the road.

The terrain was much the same with plenty of hill climbs, but I took it nice and steady to Williams Lake, although I wasn't cycling terrifically fast.

After a mooch around the tourist info, I decided to push on a bit, but only made it another 10 kms down the road to a campsite. Even though at 13.45 it was early to be calling it a day, I felt nice and chilled out, and had no particular desire to cycle on until I was completely knackered.

As I was putting the tent up, the wind, which would have been a headwind, picked up and blew strongly for several hours, and so I felt justified in having a half day. I had a good shower, and spent the afternoon reading a newspaper and doing its puzzles. Its a heard knock life !! 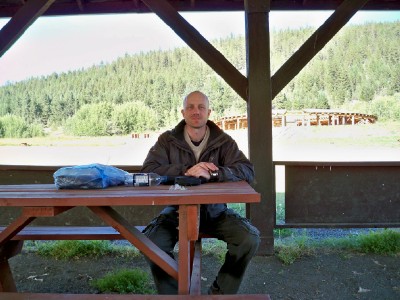 – Dave Briggs
Dave wrote this travel guide about cycling from McLease Lake to Williams Lake when cycle touring from Alaska to Argentina.