Butterfly handlebars are often thought to be the most comfortable for bicycle touring. Is this really the case though?  Below, I compare the various types of bicycle touring handlebars available, and go over the pros and cons of each one. 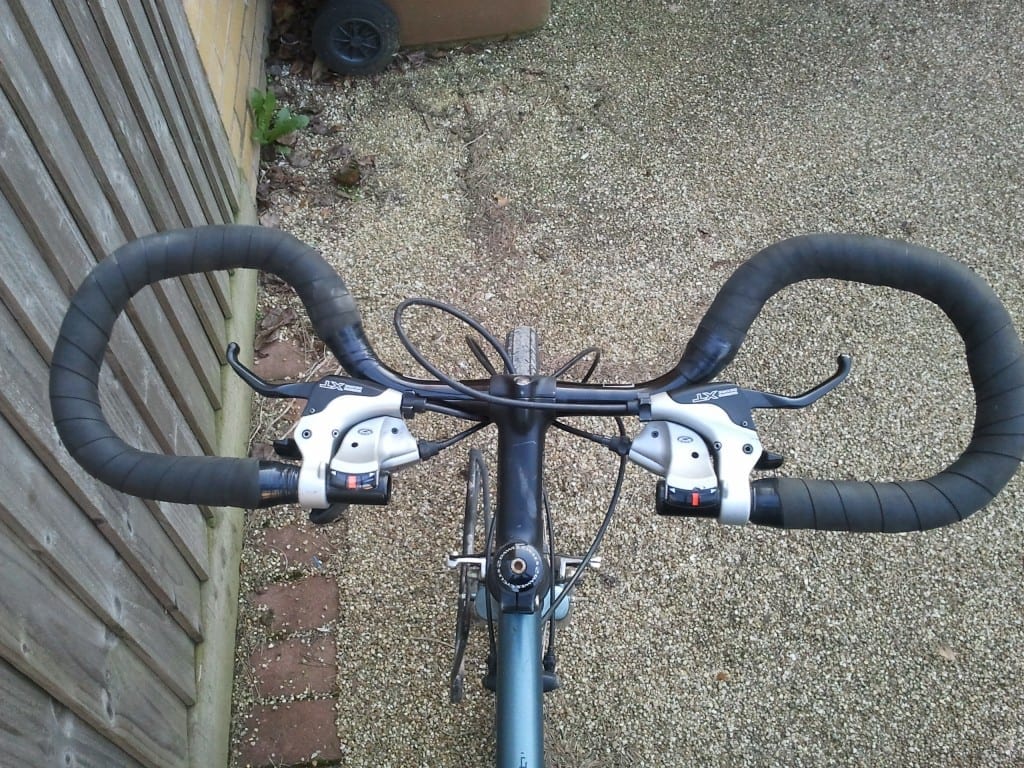 How well do butterfly handlebars stack up against other types of bicycle touring handlebars?

After having used all the major types of bicycle handlebars on bike tours around the world, I've had a good chance to compare one sort against the other.

My favourite bike touring handlebar setup (mentioned at the bottom of the post) is of course a personal choice.

In this blog post though, I go through the pros and cons of each handlebar type to aid in your own decision making process.

What are Butterfly Handlebars?

They are also proving popular with people building their own expedition bicycles. Their unique design aids hand position comfort during long bicycle rides. 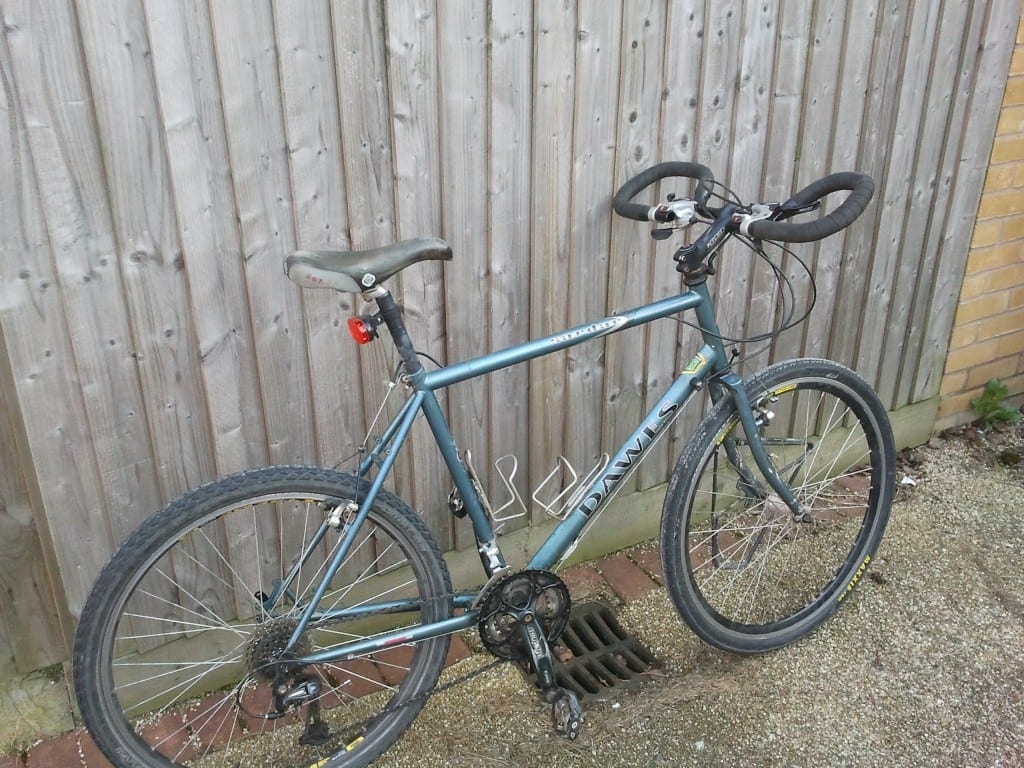 When I was first considering building my own expedition touring bike before purchasing a Thorn Nomad, I had included butterfly handlebars on my setup.

I used these for around a year or so, commuting 15 miles every day, and also doing weekend rides and weekend bike tours.

After this time, I eventually decided that trekking bars were not for me. Here's what I thought to using the trekking bike handlebars.

This type of bicycle handlebar is most commonly found on what might be classed as a classic touring bike. The ability to get low over them, means that they have their uses in bike touring, whether going downhill, pedalling into a headwind, or even drafting behind a cycling partner.

What are drop handlebars for?

Drop bars or road handlebars give a cyclist at least three different hand positions when riding on the hoods, the drops, or the bars. You can also get down low for a more aerodynamic riding position.

I have used drop bars when cycling from England to Cape Town, and also from Alaska to Argentina. During these long distance journeys, I cycled across a wide range of road conditions and I had no major issues apart from some gravel roads.

On gravel roads, wider bike handlebars might have helped more with balance and stability.

Flat bars are normally found on mountain bikes, and many expedition bicycles feature them in their set up, with the addition of sturdy end bars which can aid in steep uphill ascents.

A flat handlebar or MTB bar is a natural choice for many bicycle tourers looking for a setup that is low key and low maintenance.

I decided to opt for this style of bikepacking handlebar when I cycled from Greece to England, as I find it suits my slightly upright riding style better.

What is the best type of bike touring handlebar?

After nearly 20 years of cycling around the world on different bike tours, I have found that the best bike touring handlebars for me are flat bars. I believe that overall flat bars offer the most comfort for me personally in both hand and riding position.

Note: I have actually spent more time on long distance bicycle tours using drop style handlebars than butterfly style or any other though! This wasn't through any sort of decision making process though. It just happened to be what handlebars were on the bikes I bought at the time! 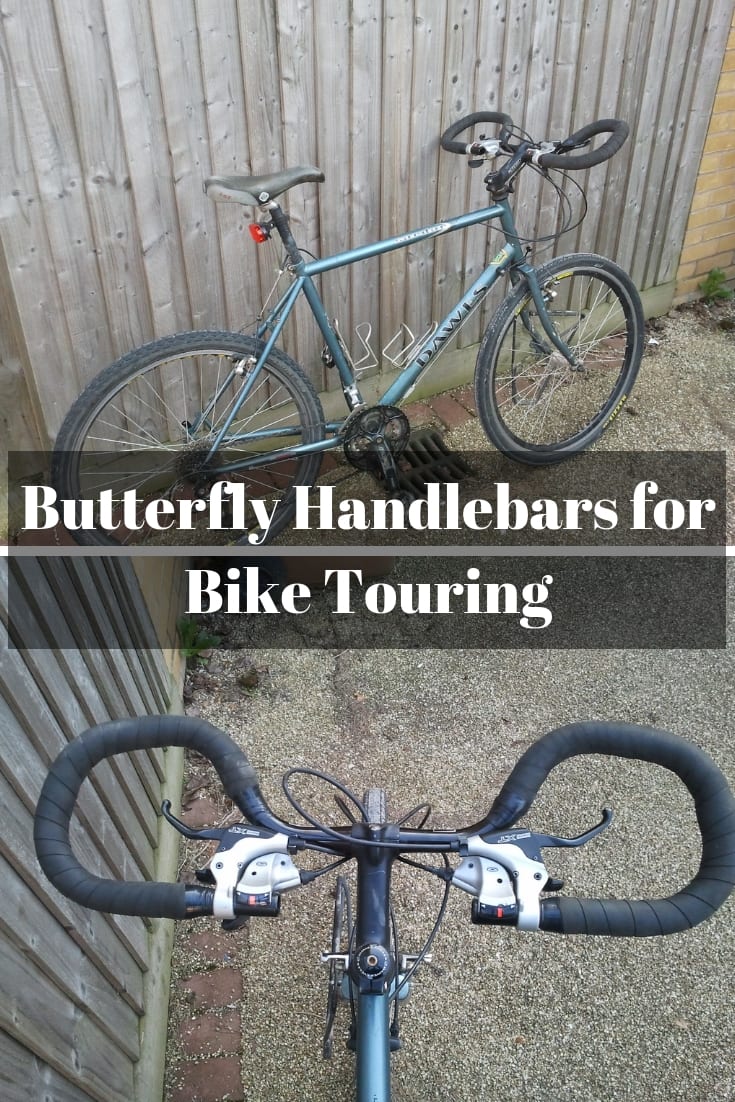 Readers who wonder if a trekking bar / butterfly handlebar might be better on their next tour ask questions such as:

Are trekking handlebars good for bikepacking?

A butterfly handlebar can be a good addition to a bikepacking setup, especially for longer tours. It offers a rider more comfort thanks to its multiple hand positions, and lots of stability when riding in an upright position.

What are the best handlebars for bike touring?

A drop bar is probably the most common handlebar, followed by flat bars and then butterfly bars. Which one is best depends on the rider!

Why do touring bikes use butterfly handle bars?

They feel comfortable on long rides, thanks to there being more than one position you can place your hands. This takes strain off the shoulders, neck, and arms, which is particularly welcome on long tours!

What are butterfly handlebars for?

Designed with comfort and efficiency in mind, many cyclists find butterfly bars more comfortable compared with flat or drops.

If you are planning a bicycle tour, you might also find these other bicycle touring articles useful.