Last Updated On July 31, 2021 by Dave Briggs Leave a Comment

This outdoor survival gear is ideal to pack in an EDC bag, trunk of a car, or even a bicycle pannier! The choices have been made based on a scenario where you find yourself in a situation you want to get out of quickly, rather than choosing gear for long term survival in the wilderness. 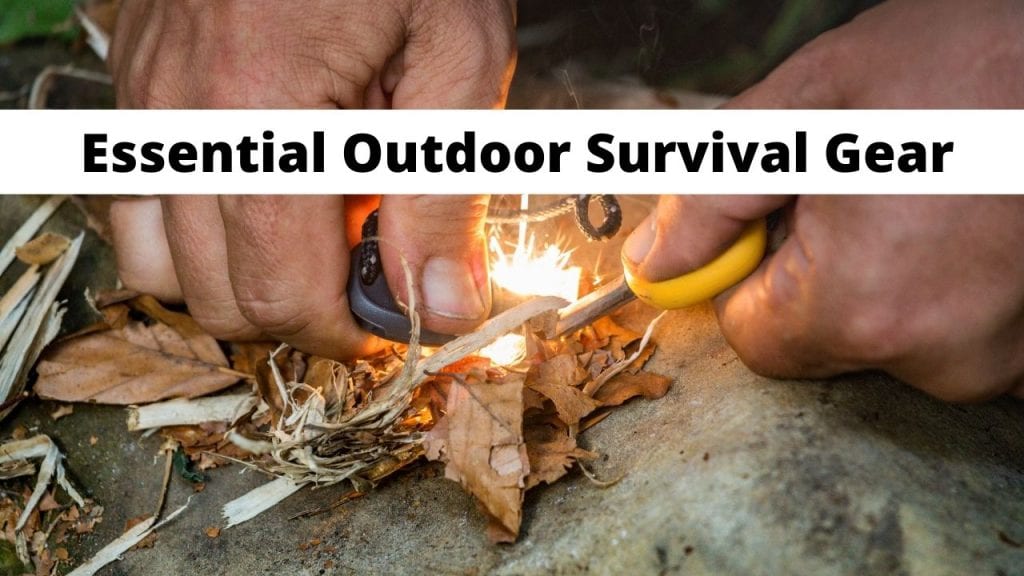 My experiences of the Great Outdoors come mainly from long distance bike touring.

I've spent months on end cycling around different parts of the world, pedaling in the cold north of Alaska, trying to keep cool in the deserts of Sudan, riding across the blinding white salt pans of Bolivia, and following dirt tracks up and down mountains in the Andes of Peru.

During this time, I've spent literally years living in a tent, and so have a pretty good idea of what surviving in the Outdoors involves.

It's also given me the insight, that apart from very rare situations, most people are only ever 100 miles away from some sort of settlement.

As such, my picks for EDC outdoors survival gear might take a different approach than some other people's. The emergency survival gear listed here has been chosen to get you out of trouble, and back to civilization where you can get help.

There's going to be less ‘looks cool' about the outdoor survival kit I suggest, and a lot more practical value. For example, the first item might surprise you.

1. A Powerbank for your phone

Most people carry their smartphones with them either as navigation devices or as a way to take photos. In an emergency, they might just be your ticket out of a tricky situation too.

If you've got cell coverage, then you've got a line out to call for help. If they don't have cell coverage, you can still use your offline maps to navigate with, and also refer to survival documents or other notes stored on the device. If you have power of course! 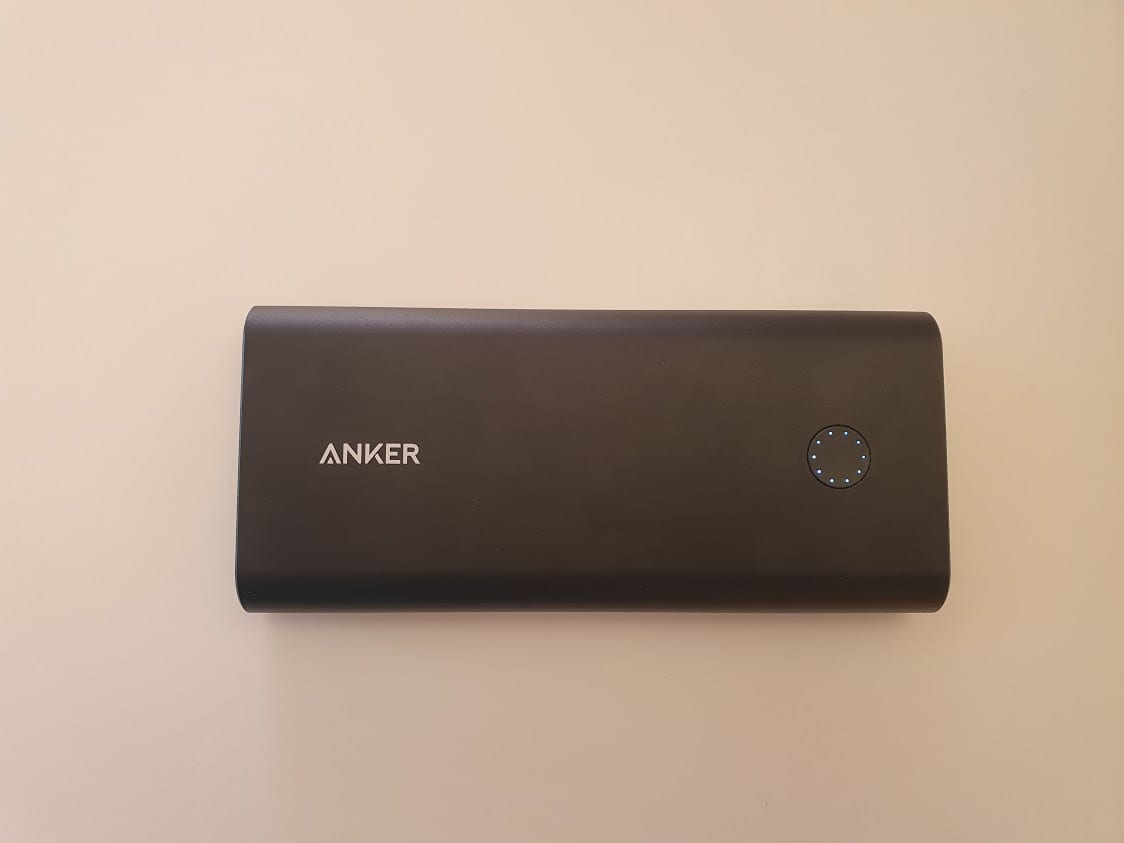 Make sure you take a small powerbank in your outdoor kit. They come in all sizes, but you really only need enough for one full charge of your phone to give you a head start in a survival situation.

Powerbanks can be as small as a lighter. Pick one that comes with a small torch built in, and you have two items for the price of one!

Assuming you were fully hydrated before you found yourself in an emergency situation, you can last about 3 days without water.

What they don't tell you, is that even spending half a day exerting yourself without fluids can start to take its toll on your mental and physical abilities. Try riding a bike uphill for more than four hours without water, and you'll see what I mean! 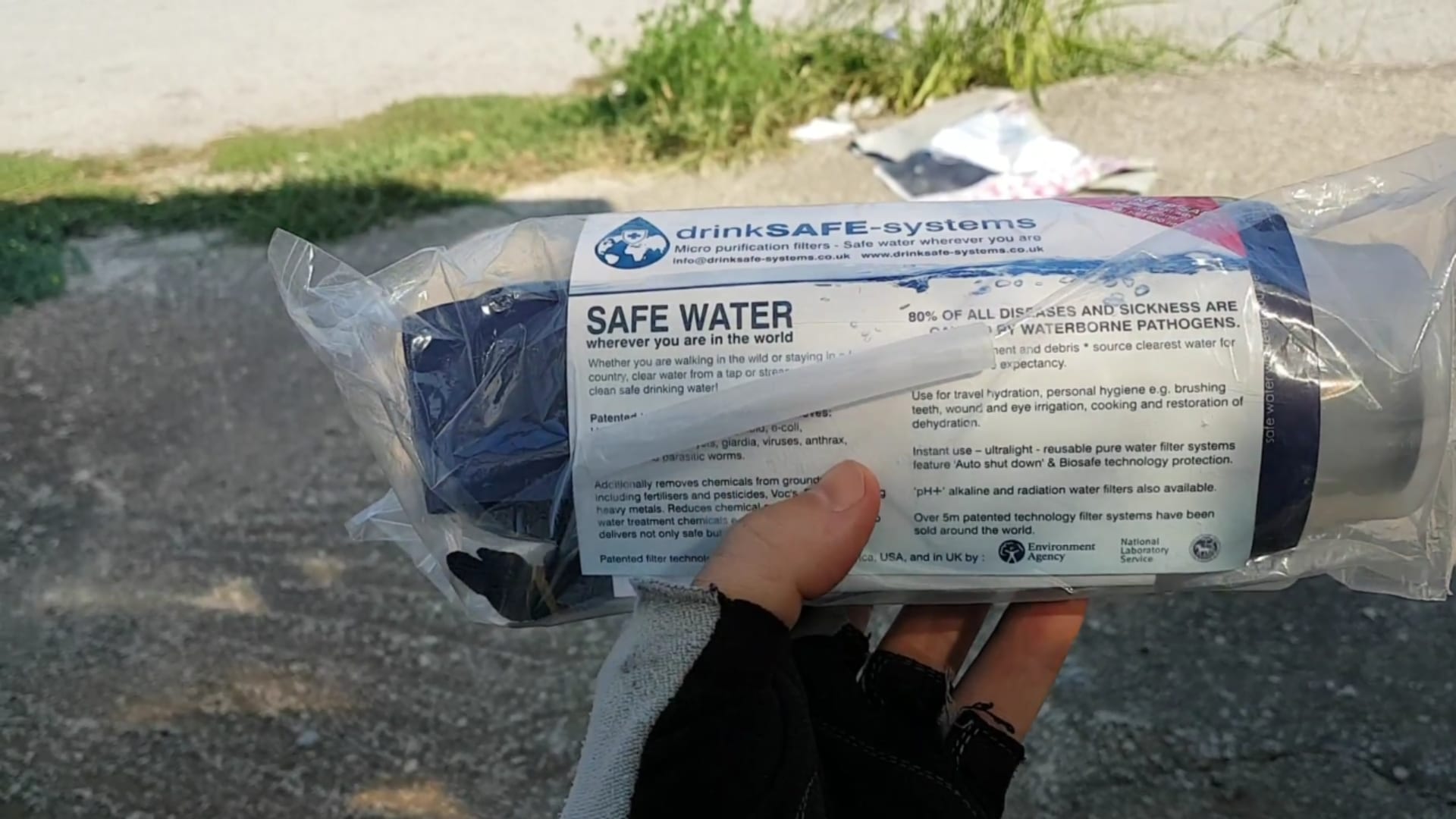 Water then, is your next priority in a survival situation after having tried to call for help and brought up a map or other information of where you are.

I like to use a water filter bottle, which basically looks like a regular water drinking bottle, but has a filtering system inside. There's many different types available, and I personally use the DrinkSafe Travel Tap which can remove bacteria, virus, and chemical elements.

In a similar way to water, you can survive extended periods of time ranging from weeks to months without eating food.

Again, the problem is, you won't be operating with the mental clarity and responsiveness that will give you the edge needed to make your way towards help if you're hungry!

Any good outdoor survival kit should include at least some food. I like to have a mix of nuts and raisins on hand. 100 grams (about 3.5 ounces) of nuts gives you around 600 calories, and they don't take up much space in your outdoor EDC survival gear.

If you're packing energy bars, be sure to swap the bars every few months that the EDC kit hasn't been used so you always have in-date food!

Perhaps one of the reasons a regular day has turned into a situation where you need outdoor survival gear, is that you've gotten injured.

For example, you're hiking along a reasonably remote path, taken a tumble, and knocked yourself out. Night has fallen, and now you've woken up disorientated, off your route, and with a couple of injuries.

Your first action should be to try to phone out for help. Even if you've done that successfully, it might be some time before anyone can get to you. In the mean time, you'll need to patch yourself up as best as you can.

Hopefully, you'll only ever need a medical or first aid kit for cuts and bruises. When choosing which medical kit to put in your survival gear, envisage what circumstances you might need it for, but also your own skill level. We all like to think we would sew up our own wounds, but very few people will be able to!

Changes of temperature in exposed conditions can in some cases by lethal. For this reason, you may want to consider adding a survival blanket to your outdoor survival gear.

At a push, and assuming the blanket is big enough, you could rig it up as a temporary tent with some cord (more about that later) if it's not too windy.

There's various different types of emergency survival blankets available, starting from around 5 dollars up to the 20 dollar mark. Keep in mind that these are designed for one or two uses only, although with care you can make them last longer.

Whether you're staying in place waiting for rescuers to get to you, or you need to take a break at night as you walk back to civilization, a survival blanket is always a good addition to you outdoors emergency kit.

Related: How to Stay Comfortable and Warm Sleeping Outdoors

If your situation demands a fire to either keep warm, keep predators at bay, or to cook with, you don't want to spend all night bashing rocks together to get a spark!

A fire starting kit doesn't need to take up much space, and packing three different types in your outdoors survival kit means you have backup in case one fails.

Normally, I take a generic cigarette lighter with me, a Ferro Rod, and some waterproof matches whenever I hike and certainly whenever I'm bike touring.

String, cord and rope has many uses in a survival scenario, and paracord is a must have for anyone preparing their outdoors survival kits. You can now buy paracord bracelets which are made up of a long length of paracord, and neatly designed can you can wear it on your wrist.

Wearable survival gear such as paracord bracelets are very useful, and once you get into the habit of always wearing one, you'll always have an element of your survival kit on hand- or at least on wrist!

Some paracord bracelets also come with other accessories built into the design, such as button compasses and even small knives.

A good Swiss Army Knife by Victorinox weighs very little, and lasts forever. With an assortment of blades and accessories, you'll never know you needed one up until the point you actually needed to use it! 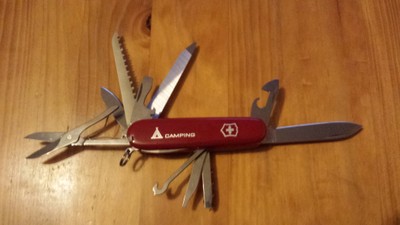 The most used parts of my Swiss army knife on a day to day basis are the scissors, tweezers, can opener and main blade. In a survival situation, perhaps the saw and bigger knife components would be your most used accessories.

I use a model called the ‘Camping' which is also sometimes called the ‘Huntsman'. The knife fits in the pocket easily, and I carry it every day. It won't take up much room in your survival kit, and you'll be glad you packed it!

While the items of emergency gear mentioned above take up very little space, we're now moving on to a few items that might fill out your EDC bag a little more. From my experiences of life in the outdoors though, I'd say it's totally worth it.

It's hard to describe the misery of being wet and cold in the middle of nowhere. I remember bike touring in Canada and it raining for 12 days straight – Even with pretty good gear and knowledge, as each day went on it was harder and harder to keep kit dry and my spirits high. I wouldn't even want to contemplate what it would have been like without waterproof gear! 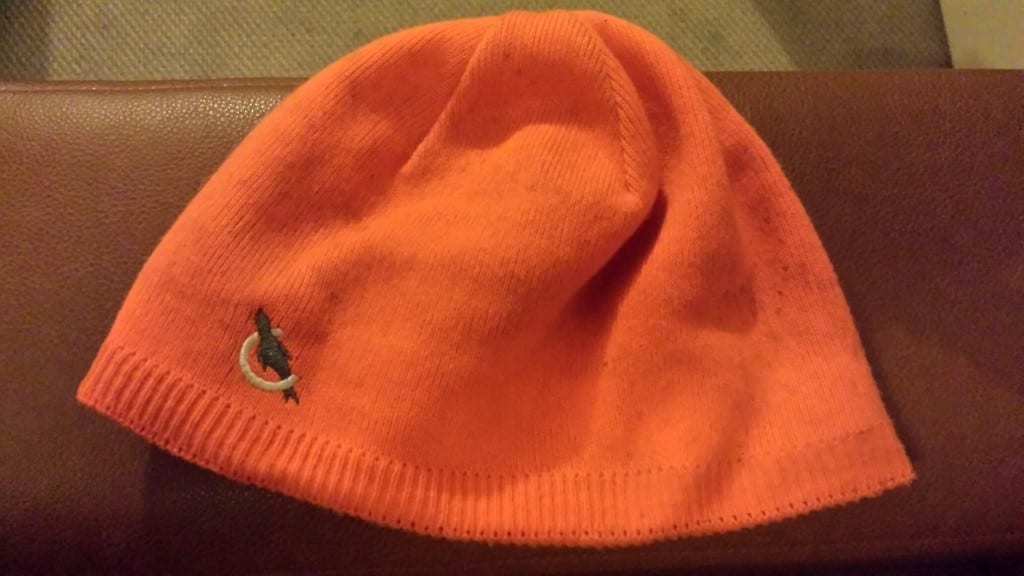 As such, I'd suggest packing a few items into your emergency bag just in case. If you choose the right gear, it will pack down super small, and weigh very little.

My personal choices include Sealskinz socks and hat, waterproof trousers, and a Goretex jacket. Other people might prefer to just pack a poncho.

I'd suggest only packing these items if you have room or envisage yourself in a situation where they would be needed. At a push, you can get by without them if you've already got waterproof gear and an emergency blanket with you.

However, in situations where you may need to spend several nights outdoors as you head back to civilization, specific gear such as these is a huge benefit. 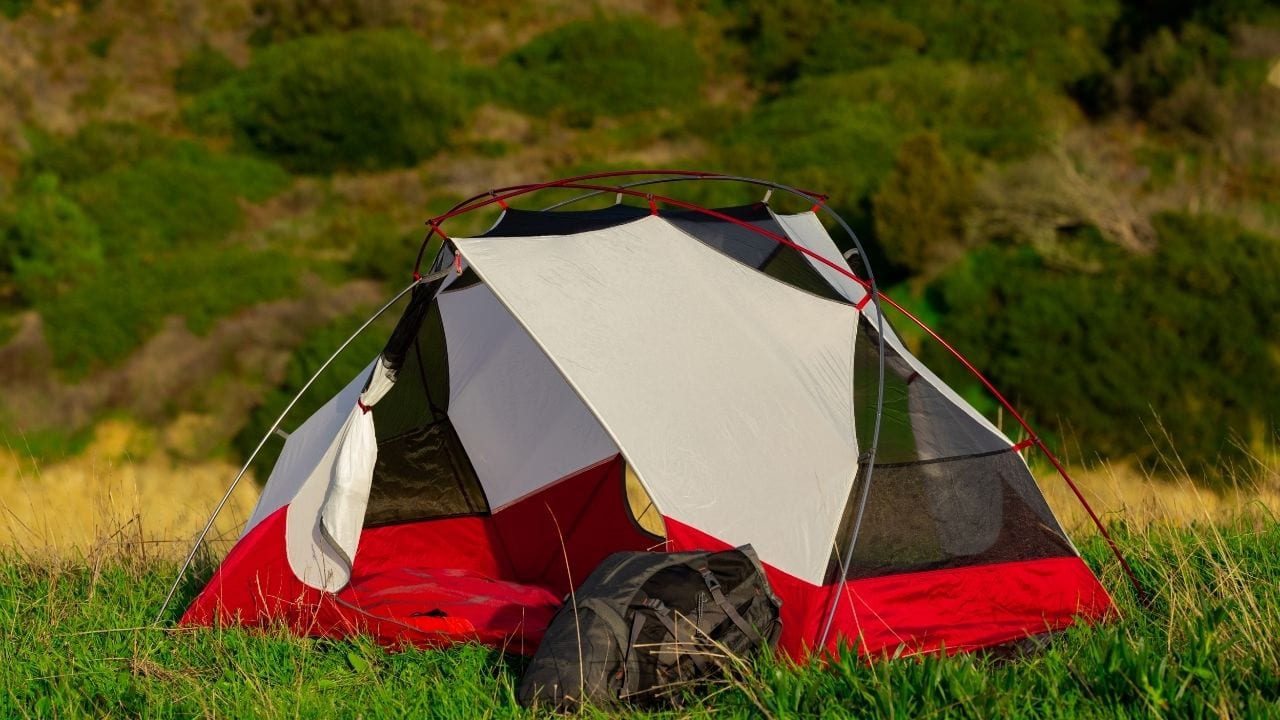 If you know how to use a Tarp to sleep under, it's a very simple and inexpensive item to pack in your outdoor survival bag. If you don't know how to use one, I'd suggest getting some practice in putting one up.

Alternatively, lightweight hiking tents can weigh in at under 1 kg nowadays – but they can be a touch expensive! Still, they are easier to set up, and the zipped enclosures keep out mosquitoes and other bugs which just might be a luxury worth paying for if you find yourself in a survival scenario!

With the right outdoor survival gear, you can get out of a difficult situation quickly. That’s why we’ve compiled this list to help you pack what will be most useful in your EDC bag or trunk of a car for an emergency escape.

We hope these items are helpful and feel free to add any additional suggestions in the comments section below! 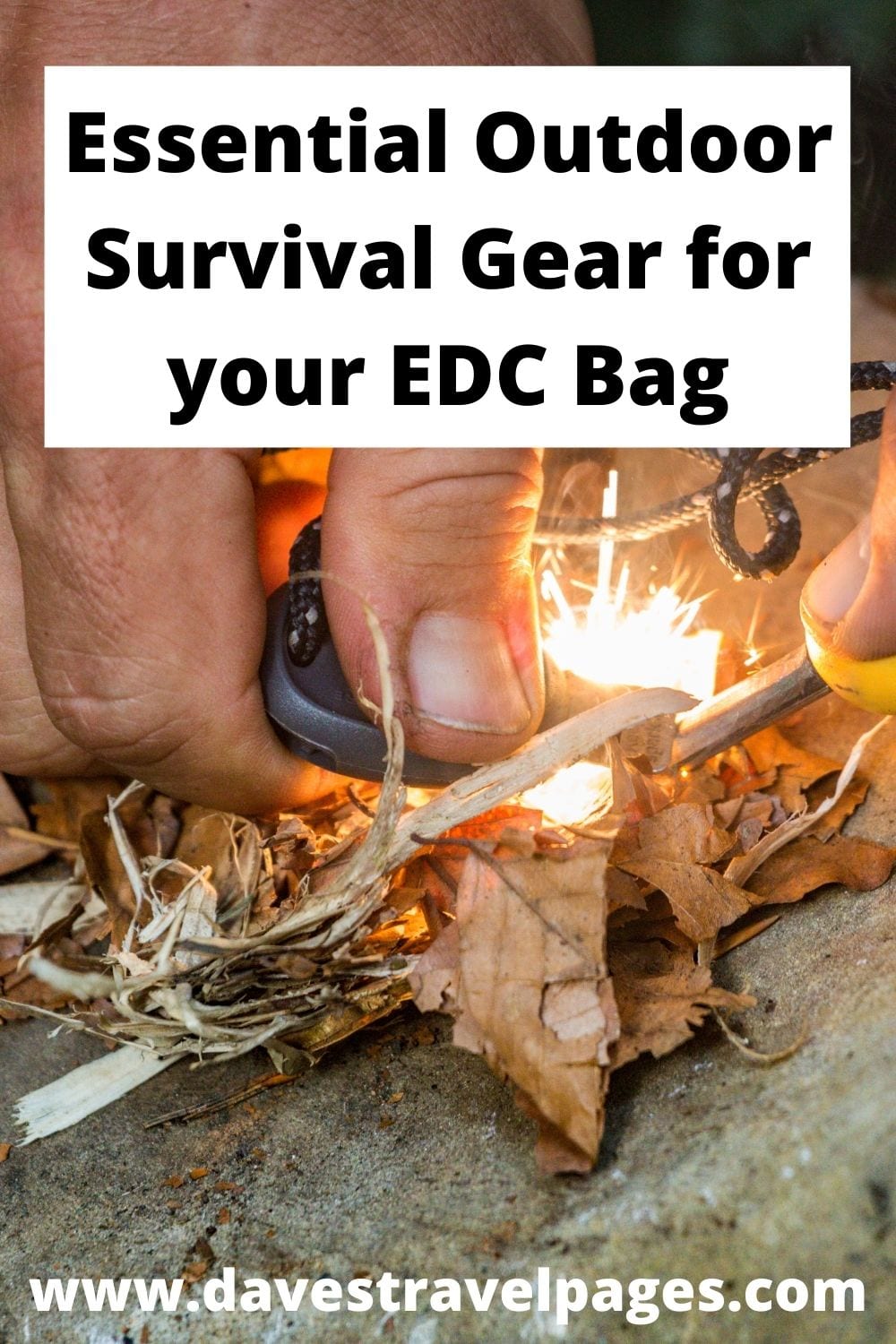