Husbands for rent in Panama?

Although I had every intention of cutting the day off at 70 kms, the accommodation prospects did not really allow for that, so I pushed on instead. 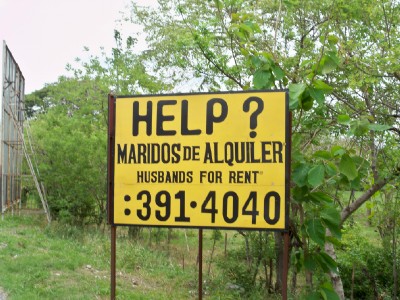 Can someone please call this number and work out what is going on !! A seemingly random sign seen on the side of the road when cycling. 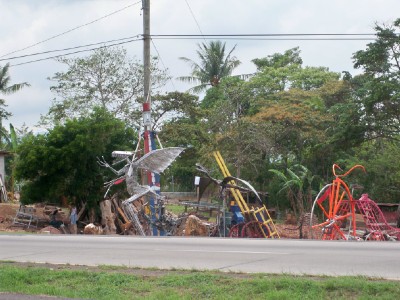 I passed by a nice display of industrial art. I particularly liked the huge Penny Farthing – If it ever becomes available in pink, I am getting one !!

I eventually ended up some 120 kms from my start point at the slightly grubby city of La Chorrera.

It was another big day, but at least I didn't feel as though I had just had the shit kicked out of me, like I did on the previous two cycling days.

The rear wheel had a slow puncture again, and as it already had eleven patches on the inner tube, I deemed it time to use one of the nine (yes, nine) other inner tubes I am carrying.

I got an early night, with the plan that I would get a nice early start in order to cycle into Panama City before nine.