After a day off to recover in Santiago, it was time to hit the road again. This bike touring blog covers the day's ride between Santiago and Penonome.

Cycling out of Santiago, Panama

A reasonably early start from Santiago, and the road was initially good quality, and lent itself to quick cycling. I made great time over the first 40 or 50 kilometres, and felt strong.

It was definitely a day of two halves though, the second of which was slightly less great.

A  strong headwind sapped my strength and made my already heavy bike feel twice its normal weight. 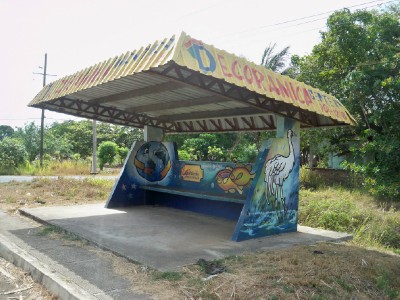 Some colourfully decorated bus stops provided both shelter from the sun and wind as well as some photo ops. 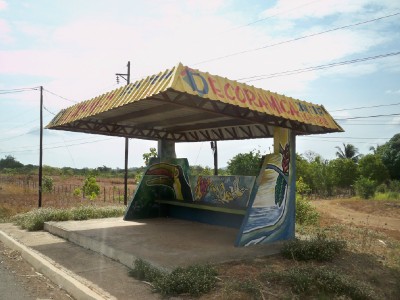 A section of rough road

There was a 20 km section of road which was being resurfaced which involved some deft manoeuvres between pavement and road, and then it seemed an uphill section began – It could have just been the wind though.

The only saving grace of the entire day, was that the wind was blowing so hard, my clothes were relatively dry for once as opposed to soaking wet with sweat.

I have to say, that I haven’t enjoyed the last two cycling days at all. I hope I get out of that frame of mind soon!

Entering Penonome, I spotted Hotel Dos Continentes. It looked out of my budget, and at 22 dollars it was if I wanted to eat as well, but what the hell !

The room was huge, had a/c, a leather chair, dining table and internet.

Tomorrow I intend to do a shorter day, and stop at one of the coastal towns about 50 or 60 kms from here. I am still on course to make Panama City for Sunday. At the moment, anyway !!