Rain has been a bit of a companion cycling through both Alaska and Canada during the trip. On this day, I decided to take a day off and shelter from it. 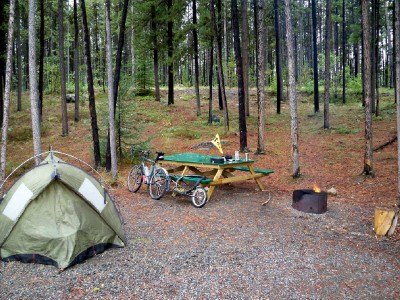 It has to be said that not all bike tours are sunshine and good weather – as cycling in Canada was to prove! I had arrived at Lake Squanga campground the previous evening, and the weather took a turn for the worse.

It rained through much of the night, and didn't stop when I got up either, so I  took my cooking gear and food over to the campground kitchen shelter so I could get some breakfast in me whilst I decided what my course of action should be.

The Italian couple were already in there, and looking pretty cold, wet and miserable. I didn't want to be any of those things, so the decision to take a day off from cycling at Lake Squanga came easily.

And it rained a lot!

It didn't stop raining until two in the afternoon, and so it turned out to be a wise decision, however, impromptu days off like that always raise a lot of questions.

Am I doing the right thing? Am I being weak for not just cycling in the rain? How will I have enough money for cycling all the way from Alaska to Argentina if I don't put the miles in ? etc etc.

It was the right choice though, as the actual camping itself was not costing me anything (I don't pay at the state campgrounds, naughty me), and I had plenty of food. 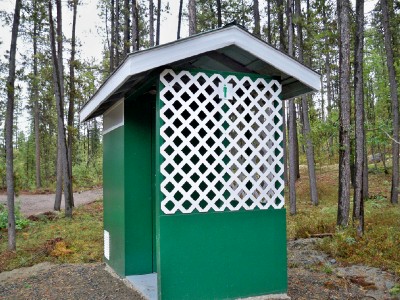 The State Campgrounds in Canada

So I thought I'd write a bit about the state campgrounds. There are usually several outhouses (shown above), which are just toilets over a long drop into a pit below, and these have been a permanent feature of campgrounds and rest areas from Alaska downwards.

I've used a flush toilet probably less than a dozen times…. which is still far more than I have showered!! 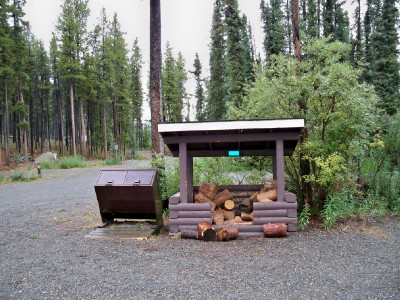 There's a mini-shelter which houses the firewood, and next to that, some bear proof rubbish bins. Some sites occasionally have bear proof lockers in which to store your food, however, this one did not.

The sheltered campground kitchen has a fireplace/stove and normally a couple of picnic tables, and some campgrounds also have a water pump.

Almost all campgrounds have a picnic table and fire-pit on each pitch. Whilst I can get away without paying for using these areas, it makes sense to do so, rather than just pitch my tent at the side of the road or by a river.

And that was pretty much my day off!

– Dave Briggs
Dave wrote about this day off from cycling at Squanga Lake in Canada when bicycle touring from Alaska to Argentina.