After a day off the bike sheltering from the rain, it was time to cycle from Squanga Lake to Teslin in Canada. Stayed the night at the Yukon Motel Campground. 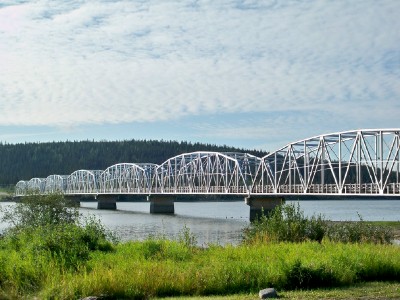 Cycling out of Squanga Lake

A wise decision to have a day off because of the rain yesterday, as today's weather was great for cycling. In no time at all I was in Teslin, which although for the Yukon is a considerable town of 450 people, is still basically only three buildings of any significance.

There is a choice of accommodation in Teslin, including Teslin Lake Campground, and Dawson Peaks RV Park. In the end, I settled for the Yukon Motel campground, which at $15 was good value.

I pitched my tent right next to a plug socket, and so had power and WiFi in the tent… this camping lark isn't all roughing it don't you know!

The greatest thing, were the showers, which by far were the best I've had all trip. In fact, they were so good I even considered having another one the following morning, but in the end, two showers in a 24 hour period would have been too much of an extravagance.

The grocery store over the road had a good selection, and was reasonably priced, and so I spent $30 for the following few days supplies. At night, I embarked on a feeding frenzy and found it hard to move when I had finished.

Bad news for the day

My ten pounds MP4 player had to be binned. It encountered some sort of software error from which it couldn't recover, quite possibly brought about by the incredibly high score I knocked out on a game of Tetris. I will just have to hum to myself from now on.

I'll have to get another one as it was an essential piece of cycling equipment!

Use the links below for more posts:

– Dave Briggs
Dave wrote this travel guide about cycling to the Yukon Motel Campground, Teslin when cycle touring from Alaska to Argentina.