In this guide on choosing a camping stove for bike touring, we'll take a look at what's available and which type of stove might be best for you. 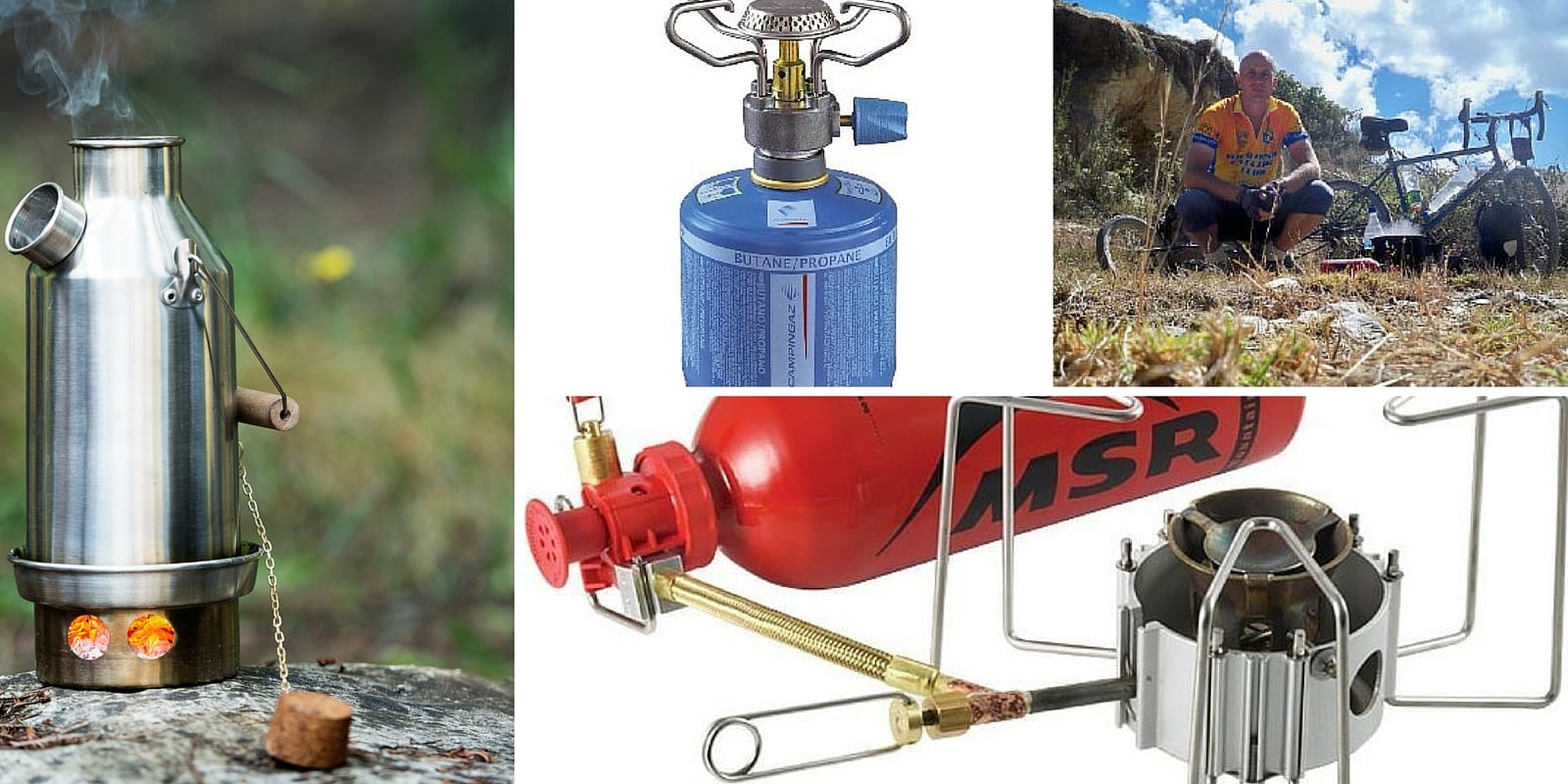 Reasons to take a camping stove on a bike tour

A good camp stove is a vital asset for anyone who is bicycle touring, especially if they want to keep their budget under control on long distance trips.

Eating in cafes or restaurants is not a viable option day after day in most (but not all!) parts of the world due to the costs. The ability to cook up a cheap meal on the camp stove is a great money saver.

Of course, you don't need to carry a backpacking stove on every bike tour you make. Typically, you only need them on the longer bike touring trips.

Pros and Cons of Camping Stoves when Bike Touring

As with so many things when it comes to packing for a bike touring trip, whether or not you take a camping stove will depend on your personal preferences.

Pros: You can cook food yourself no matter where you camp. It will save you money on longer bike tours. It's easier to cater for your own cooking preferences and requirements (such as being vegan).

Cons: It's extra weight to carry. You'll also need to carry fuel bottles in some cases. You might not be able to get cannisters for cannister stoves in all parts of the world.

My thought is if you are on a RTW multi-month bike tour, you'll want to take a camping stove. If you're on a two day bikepacking adventure, you won't need one. Anything in between and you'll want to balance out the benefits of being able to cook meals yourself against carry an extra couple of kilos of weight.

There are many different types of camping stove available, and this basic guide to how to choose a camp stove for bicycle touring comes from my own experience. (Check here for other bicycle touring tips).

I have tried most of the different fuel types at one time or another, and each one has its uses in different situations and countries.

Camp stoves can be divided into three broad categories, which are Liquid Fuel, Canister Fuel, and Alternative Fuel.

Each fuel type has its advantages and disadvantages, whether it be the availability of the fuel type, how long it takes to boil a pot of water, or how heavy the camp stove itself is.

Price is also a factor of course, as will be reliability and access to parts. This means that there are a lot of variables which can go into a decision on which one may be best to use on a cycling tour.

There are dozens of camping stoves available which can run off of all sorts of liquid fuels, such as petrol, diesel, white spirit, methylated spirits etc.

Whilst for some hikers they might be considered to be a little heavy, for the touring cyclist the extra weight is easily compensated by the ease of use and durability.

The MSR Whisperlite Internationale is ubiquitous in the bicycle touring world, and runs on almost any liquid fuel. Most people will run it on petrol, although it can run on diesel.

Whilst diesel may be cheaper in some parts of the world, using it does give off more smoke, so I tend to avoid this.

The Whisperlite comes with a field maintenance kit which means that most repairs can be carried out in camp, and it truly is a robust and reliable piece of kit.

Of all the camp stoves I have used, this is my favourite, and I used it when cycling from Alaska to Argentina.

Advantages – Fuel is available everywhere (just find a filling station), it is easy to maintain and is super reliable.

Disadvantages – There is no simmer control on this model, it can be noisy. 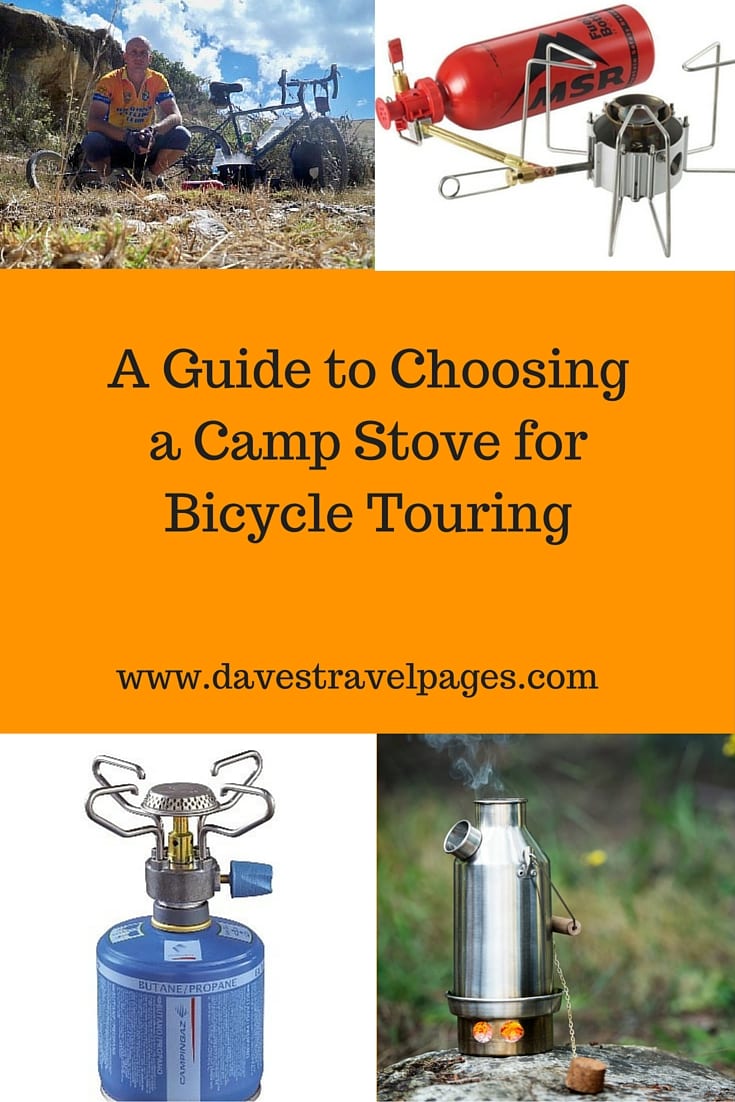 In my opinion, canister fuelled camp stoves have their place in the bicycle touring world, but not on extended trips. A two week tour in Europe – brilliant. Cycling through remote regions of Peru – No way. I have used canister fuelled stoves in the past, and perhaps the most popular, is the Camping Gaz version which I used through Europe when cycling from England to South Africa.

It is a pretty simple piece of equipment, robust, strong and lightweight.

Disadvantages – You can't reuse the canisters. Buying canisters can be troublesome in out of the way places, and impossible in some countries.

The word alternative is normally used when something doesn't fall neatly under a set category, and so it is with camp stoves! In this case, alternative fuel could include solid fuel blocks such as hexamine as used by the British Army, and even foraged wood that can be used in a Kelly Kettle.

As far as an hexamine stove goes, they are very light weight and can even fit neatly into a pocket. The downside to using such as camp stove, is that the hexamine blocks do not last very long, and the burn heat can not be adjusted. I've used these a few times, and whilst they might be ideal for a weekend cycle and camp trip, they are of little use to the touring cyclist on an extended trip.

Bike Touring with a Kelly Kettle 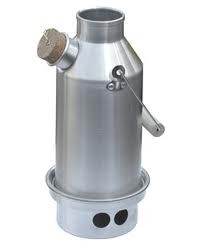 The Kelly Kettle is something of an interesting proposition to anyone who expects to spend more than a few nights wild camping or who is cycling through wilderness areas.

It's fuel source is wood, which is burned inside the funnel. Water is heated in the double skin of the kettle itself, and a pot could also be placed on top of the Kelly Kettle.

The main advantage to this system is that the fuel is free, but the downside is that the use of Kelly Kettle is probably frowned upon on campsites, and that any pots placed on top of the stove would quickly become soot blackened.

It is also quite a bulky stove that would not pack away in bicycle panniers particularly easily.

I haven't actually used this system myself, and although it does to a certain extent appeal, on balance I think it is a little too gimmicky. I would certainly be interested in hearing from anyone that has field tested this camp stove for any length of time on a bicycle tour though!

Whilst there are other factors involved in how to choose a camp stove for bicycle touring, this gives a basic idea of what is out there. If you would like to ask me any questions directly, then leave a comment or send me an email. I would love to hear from you!

Readers looking at choosing between backpacking stoves to take on their next bikepacking trip often ask similar questions such as:

What should I look for when buying a camping stove?

When looking to buy a camping stove, there are a few things you should consider. The first is the type of fuel the stove uses – this could be canister fuel, alternative fuel (such as hexamine or wood), or liquid fuel. You should also think about the weight and size of the stove.

How big of a camp stove do I need?

When looking to buy a camping stove, you should think about how big of a stove you need. If you are only going on a short trip, then you might not need a bulky stove that takes up a lot of space. A small, lightweight stove that uses canister fuel would be perfect for this type of trip.

Is a camp stove necessary for bike touring?

A camp stove is not necessary for bike touring, but it can be a very useful item to have. If you are touring for an extended period of time, cooking your own meals can save you a lot of money. There are a variety of different camp stoves available, so you should choose one that best suits your needs.

Are wood burning stoves any good for bicycle touring?

While there are some disadvantages to using a wood burning stove for bicycle touring – such as the fact that they are frowned upon on campsites and can be quite bulky – there are some advantages too. For one, the fuel is free. Wood can also be collected from the surrounding area, which is ideal if you are touring in a wilderness.