Last Updated On July 22, 2019 by Dave Briggs Leave a Comment

Today I cycled into yet another new country on this bike tour – Costa Rica. First though, I still had some headwinds to battle against leaving Rivas in Nicaragua. 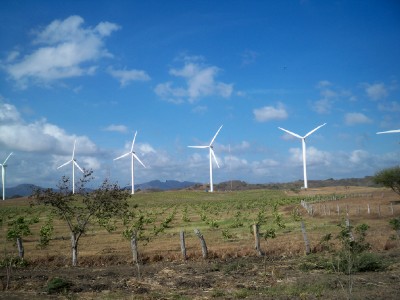 An early start, and straight into the wind once more. When my MP3 player ran out of battery 30 seconds into War Ensemble by Slayer, I knew it was shaping up to be a crappy day.

Heavy winds once more hindered my progress, requiring double the energy than usual to cover the same ground.

The views over Ometepe volcano lake which I had been looking forwards too were ruined by dust in the air, and clouds over the volcanoes, and it seemed that every noisy, black fume polluting vehicle was on the road today.

I passed by a huge windmill turbine farm, which is always a sight to behold, although I was slightly concerned that the steel arms might blow off given just how strong the wind was.

I actually got blown off the road five times today, and I´m a pretty strong guy (well, I like to think so at any rate).

Cycling across the border into Costa Rica

The border crossing into Costa Rica was a bit of a circus on the Nicaraguan side, but not too bad, and the Costa Rican side was quick and simple.

As soon as I had crossed over, the landscape changed from the treeless farm land of Nicaragua, to forested hills. Great. Now I had wind AND hills.

the joy I normally take from seeing another touring cyclists coming in the opposite direction was tainted. As we stood in the wind, chatting about each others prospective routes ahead, I couldn't shake the thought pattern that I should really push on as soon as possible in case the weather worsened.

After much struggling, I finally made it to the town of Liberia and found a hotel – The aptly named Hotel Liberia.

I was a bit concerned as to what the prices may be like in Costa Rica, but 12 dollars got me a biggish room with own shower, and internet signal.

Looks like I will take a few days off here until the holiday period is over, as its pointless to travel on roads heavier with traffic than usual, and run the risk of either no place to stay, or places with over-inflated prices. Time to chill for a few days ! 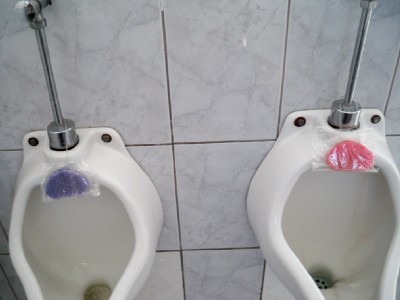 Urinal Fail !
I don't normally take pictures of urinals…. honest. But when there is a Fail this epic, I have too. Methinks someone misread the instructions of where those cubes should go !
[mailmunch-form id=”728831″]