Leaving San Ignacio, today's cycling took me on to Santa Rosalia in Baja California. This was part of my 18 month bike tour from Alaska to Argentina.

Cycling out of San Ignacio

On leaving San Ignacio, I took this photo of the Old Mission there, which is located in the main square. I really should spend some more time looking around these places! I guess if I spent a day exploring each place I visited though, I wouldn't be getting anywhere very fast. 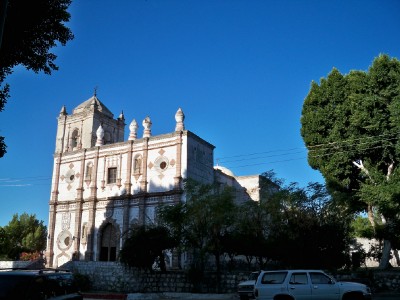 Cycling in a headwind

Cycling uphill, and into a headwind is not exactly my favourite pastime, although I seem to do an awful lot of it come to think about it. To make matters worse, my MP3 player decided to start behaving erratically, and would lock up emitting a high pitch screech.

Some people might say that the sort of music that I listen to sounds like this anyway however.

Am I cycling the right way?

The 20 km downhill was ok though, so it all worked out in the end. I am now on the Sea of Cortes side of Baja, which is a bit weird, because now the sea is on my left as I cycle south. For thousands of miles its been on the right, so it will take a bit of getting used to!

The wind was incredibly strong, and had I been able to find somewhere to pitch a tent to wild camp, it would soon have turned into a kite.

I managed to find the shabbiest looking hotel for 200 pesos, and despite the hotel looking like it would fall down at any minute, the room was not too bad.

I watched a TV program called El Pantera in the evening. I'm not entirely sure what it was about, but it seemed to have a lot of barely dressed women running around and dancing, while a macho stud type (Pantera) went around the city beating people up and stealing cars. Marvellous entertainment!!