Today's bike touring blog covers the section of cycling between Vizcaino and San Ignacio in Baja California Mexico. Part of my Alaska to Argentina bike ride.

A bit of a mixed bag today… thinking about it, not a great deal of anything positive happened at all today!

My bottom left gum has been a little sore for a couple of days, and on checking it out in the mirror, it appears that one of my wisdom teeth has picked this moment to put in an appearance.

Whether this makes me wise or not is a different matter entirely. It’s not painful, but lets say that I am ‘aware’ of it. Anyhow, nothing could be done about it there and then, so I got ready and on the road.

Which is where a problem arose. My bicycle wouldn’t change gear. I immediately knew what was wrong, and swore loudly.

At the campground, there had been many small spiky burs in the sand in the orange grove where my tent was, and to save me getting punctures, I had stood the bike upside down.

A genius move I thought, and indeed, I didn’t get any punctures, but evidently the sand had worked its way into the gear shift system on the drop handlebars.

I headed back to the campground, and it took me the best part of an hour to get it working again. Its far from perfect, but it does the job. It was 10.20 by the time I finally got underway again, which was a little later than I would have liked, but as it turned out, the cycling was easy.

So easy, it was a little boring. Even when, over the last 10 kms, several steep hill climbs appeared and a huge headwind picked up, it was more irritating than hard work. 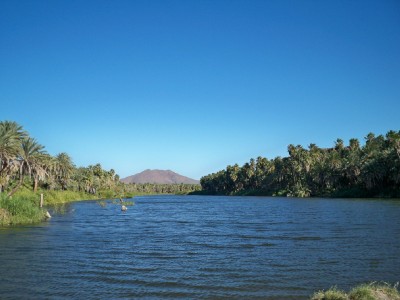 Coming into San Ignacio, I crossed a river. And it had water in it! This might not seem significant, but in all my time on the Baja peninsular, this was the first naturally occurring body of water that I had seen.

I was looking forwards to San Ignacio, especially now it felt like an oasis, but I was to be disappointed.

The campsites, apart from one drastically overpriced one, were all closed down, and the hotel owners wanted stupid money.

I eventually found a hotel that was inexpensive only in comparison to the others on offer and dived in. I checked the net, and had two emails back from Warmshowers hosts, which I had hoped to line up for a few days down the road.