Today was one of the toughest days of my bike tour from Alaska to Argentina. Here's my blog post covering the day's events cycling from San Felix to Santiago in Panama. 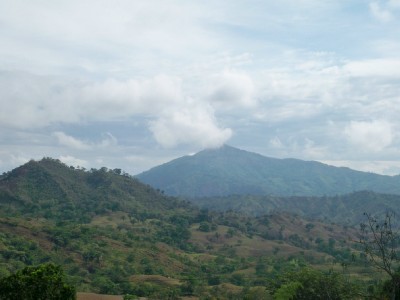 I wasn’t wrong when I thought that today would be a tough ride.

For regular readers, you’re thinking  “I’ve heard all this before”, so I will endeavour to give you a deeper insight into what it felt like.

This rates as my third toughest day on the trip so far. The first one being in Alaska, and the second being on the Nicoya Peninsular. Its difficult to describe the actual cycling so I’ll mention the things that stand out… starting with sweat.

Sweating on a bike tour

Sweat is natures way of keeping the body cool. By sending moisture to the surface of the skin, air blows on it thus cooling the body down. A little like air conditioning.

Well, that is the theory, anyhow.

In this case, nature failed to take into account a crazy guy on a bike, pulling half his own body weight again in a trailer, traversing hill after hill in insane temperatures. 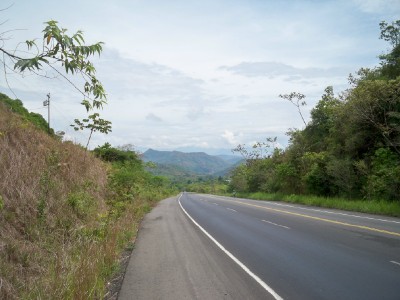 How much do you sweat cycling?

The first thing to start sweating is my head. The brow to begin with, and then the top. What, with it being nice and smooth and everything, I wipe it off with my forearm.

Thing is, about half an hour later, my forearm starts sweating as well. Its about at that point I think how great it would be to have a handkerchief or something similar.

After my forearms, my back and stomach start sweating. The cycling top that I wear gets a good soaking at this point, as do my shorts.

Unusually today, my nose started sweating as well, which I have to say is a first.

Now, with all this sweat, salt starts to sting my eyes to the point that I can barely see. (No I am not crying, it just looks that way, honest). If an eyebrows job is to stop sweat dripping into the eyes, then I need to take mine back for a refund.

Whenever I stopped to lean over the handlebars to get enough breath to swear (happened frequently in the last two hours), sweat would drip onto the handlebars, front tyre and ground.

Basically, I was a cycling puddle.

Then, whenever I tilted my head back to take a drink, (lovely hot water warmed by the sun, ideal, not !), the salt would sting my eyes again.

Not the most enjoyable day's cycling

As you can tell, this was simply a terrific day ! It was only by careful use of the MP3 player and the occasional availability of Fanta that I made it through.

A few kilometres outside of my destination of Santiago, I realised that the bike was making an odd sound. Stopping, I noticed that a mass of wire had dug and threaded itself into the back tyre.

All bar one of my punctures have come from the thin metal wires from shredded car tyres on the road, and this was no exception.

It was a slow puncture, and what with the rain clouds getting darker and starting to spit, one that I could live with.

3 kilometres and two pumps later saw me to Hotel Hong, where 10 bucks a night for the room was just fine.

Burned by the sun, tired, sweaty and exhausted, I had made it.

And thank you divine providence for locating a McDonald's within stumbling distance.