Although I'd been shown excellent hospitality, I was in no condition to enjoy it as my stomach was going through a bad patch. Being sick on a bike tour is one of those things you have to deal with sooner or later! No rest for me though – I had to continue the bike tour through Colombia. 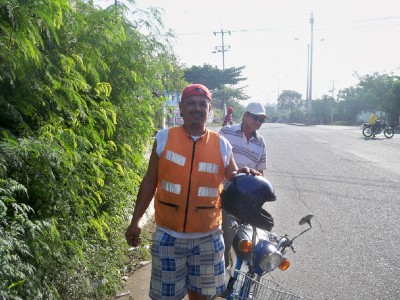 Cycling from Sincelejo to Sahagun in Colombia

As you read from the previous blog entry, I had stayed the night at a friendly Colombians property. Unfortunately, I was too ill to fully appreciate it, and had spent a lot of time either shivering in the shower, or on the toilet!

In the morning, Rodrigo organised breakfast for me, which I actually managed to eat, and then he got one of his guys to escort me to the edge of town on his motorbike.

I’d just like to say thank you Rodrigo for your hospitality, and adding a new dimension to my travels through Colombia.

I had in mind today only a short journey of 50 kms to the town of Sahagun, and was in no rush, as I still felt pretty crap. In fact, the total calorific intake for the day was an egg aripa, cup of coffee, bag of jelly babies and bag of yoghurt.

Even drinking water was off putting, none of which makes for optimal cycling ! Making Sahagun for lunchtime, I checked in at Hotel Central for two nights in order to get my shit together…. Literally.

How do you cope with being sick on a bike tour?