Last Updated On January 28, 2023 by Dave Briggs Leave a Comment

Every now and again you come across a ‘road angel' on a bike tour who helps you when you seem to need it most. Today, it was Rodrigo in Sincelejo.

Cycling when ill on a bike tour

Not feeling particularly hungry (which for me is a very bad sign), I set off with an ambitious 120 kms to Sincelejo in mind. Initially, things went well, but my lack of appetite, and then lack of thirst were not good news.

Nearly ten months of cycling has left me in pretty good shape, but I simply don’t have the reserves of body fat to sustain a day or twos cycling without eating properly.

Combine this with intense heat, some hills and stomach cramps and it wasn’t my best day ever.

Struggling into Sincelejo, I started to look for a hotel when a guy on a motorbike pulled me over. After a quick conversation it turned out his boss had seen me cycling by, and had sent this guy out to take me back with him.

Following the bike back, we pulled into a business called La Rectificadora, where I met the owner, Rodrigo. 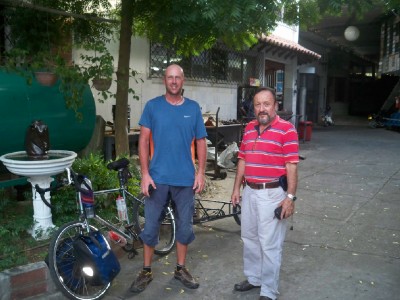 Rodrigo spoke great English, and explained that he liked talking to travellers who passed through the town, and would I like to stay in an apartment on the business premises. Indeed I would sir, thank you very much!

The only slight problem from my point of view, was that I was feeling pretty rubbish by this point, sweating, shaking, on the edge of exhaustion and with stomach cramps, so the next few hours went by in a haze.

Rodrigo showed me to the apartment, and said that after half an hour, lunch would be brought up to me.

In that half hour, all I could do was lay on the floor in the shower with the water pouring over me. Pretty pathetic really.

In a half hour, there was a knock on the door, and one of Rodrigo’s guys had a tray of food in his hands. Rodrigo said he would let me eat and rest for a couple of hours, and then come back for me. 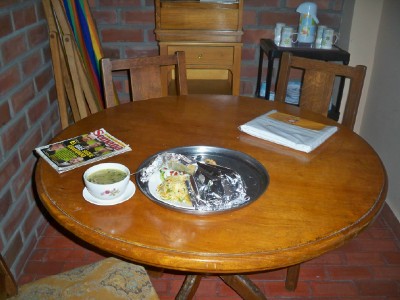 The people you meet when cycling…

Lunch looked great, but I was totally lacking in appetite, and managed no more than a couple of mouthfuls of rice before passing out for a couple of hours.

I woke up feeling a little better, and Rodrigo took me on a tour of his factory where he is also rebuilding a Mini Clubman.

In his office, he showed me photos of other travellers he has given hospitality to, and also showed me a slideshow of a trip he himself had undertaken.

His trip would have been worthy of a TV show… Rodrigo and 4 friends drove 1928 model cars from Colombia to the southern most tip of Argentina and back again a couple of years ago. It sounded like a great adventure, and his photos were stunning.

Rodrigo was a great guy and generous host, and I just wish I could have met him when I wasn’t feeling quite so ill !