Last Updated On July 14, 2019 by Dave Briggs Leave a Comment

My first full day's cycling in Nicaragua. It was a strange landscape of smoking volcanoes as I cycled from Somotillo to Leon on my bike tour. 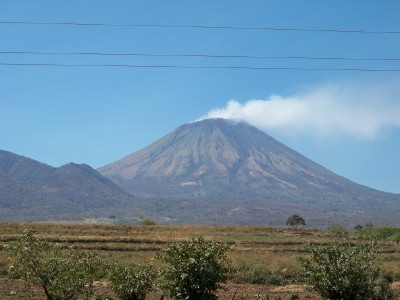 A much needed early start, as the heat soon picked up. The road leading out of Somotillo was brand new and smooth, which made the initial miles fly by.

Generally, the lay of the land was flat, although with smoking volcanoes dominating the skyline… which is about as cool as it gets!

I had been reading someones travel blog who had cycled through here about 8 months ago, and according to them, they found the people to be unfriendly and they felt worried for their safety.

Well, either they were having a bad day, or they got their countries mixed up, because I found everyone to be friendly and interested in the trip.

Where to stay in Leon, Nicaragua

It was a long day, with the heat reaching 36 degrees, which is pretty warm by anyone's standards. Reaching Leon, I headed for the centre, and had a scout around for somewhere to stay. The centre seemed to be populated by young, female backpackers – What a wonderful place!

There were two backpacker places opposite each other, which perhaps under other circumstances I might have tried, but I needed to do some bicycle maintenance, so a bigger room was required.

Hotel America had such rooms, but was a bit of a challenge to track down. When I eventually did find it, they were painting the sign for the place inside, which explains why I had some difficulty in locating it.

I felt completely wiped out by the 100 kms ride in the sun, and no matter how much water I drank, it didn't seem to be enough. After a couple of hours kip, I felt a bit more with it, and started to work on the bike.

Chain cleaning took quite a while, and it also took two attempts to repair a puncture – Maybe I wasn't quite with it after all !

I've initially paid for two nights, but may very well extend it to a third so that I am fully rested for the next leg towards Liberia in Costa Rica.