Last Updated On August 1, 2021 by Dave Briggs Leave a Comment

During my bicycle touring adventure from Alaska to Argentina, I spent some time in Uyuni, Bolivia. Here's an update from my time spent there.

Time off in Uyuni, Bolivia

So, I spent this last week off in Uyuni in the hope that I could complete two lucrative (well for me at any rate!) Freelancer contracts. As things worked out, this never materialised, with both contracts dragging on without a sense of urgency from the employers, and myself finding some rather worrying loopholes in the Freelancer system. 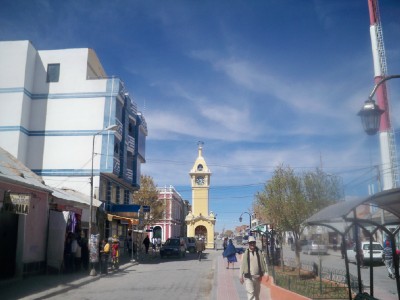 As such, I have been a bit disappointed that a way for me to earn money as I travel has shown to be a bit of a pain in the arse. That said, earning cash is never easy, so maybe I should just relax about it. I still have hopes for the site, and when the two contracts finally get going, it will be a nice little earner.

Still, my week off has not been a total loss. It felt good to get out of the sun for a while, and my lips, despite using lip balm, were badly chapped after the time cycling across the Salar de Uyuni. These have now recovered, and most of the other remaining sun burn has disappeared. It also felt good to get a few warm showers in!

My bicycle shorts, which I have had since the beginning of the trip needed patching, and so a little old man in a kiosk took care of that for me. With luck, they will now last until the end of the trip, without my arse cheek showing through.

The spare wheel that I had been carrying (since I had to buy a new spare wheel), has now been donated to another little old man, and I have the cassette off it as a spare. The front wheel slight wobble seems to be due more to the tyre than the wheel, which is a little concerning, but with Argentina only a few days ride away, and the prospect (I hope!) of decent stuff being available, this should not be an issue.

My sleeping bag zip is completely broken, but I think with that and a combination of the blanket I bought, it should see me through. I foresee a lot of wild camping in Argentina, which is a pricey place compared to everywhere else I have been for this last year or so.

I found a book. Now, this might not seem like a great deal, but I haven’t read an English book in months (its hard to justify spending an entire days budget on buying a book), so not only have I got something to read, but I also now have something to exchange further down the line.

A Belgian couple (another couple on bikes!), gave me a map of Southern Argentina, which is not only incredibly useful, but has saved me a few quid as well… thanks a lot guys!

I have tinkered with this website, and also my hostalworld hostel booking website. All my sites need lots of pages adding, which is just a constant process.

So, with all that and more going on in the background, and having had a relaxing, if slightly frustrating week of from the bike, I hit the road on Sunday morning to make my way to the border with Argentina.

As I spent so long in Uyuni, I have written a short guide to the town for the budget traveller coming up next.