Last Updated On August 1, 2021 by Dave Briggs Leave a Comment

This short blog post entry covers cycling from Colchani to Uyuni in Bolivia.  This was part of my cycling tour from Alaska to Argentina.

Only a short days cycling of some 20 odd kms today, so no need for an early start. On the way out of Colchani, we bumped into a Swiss cyclist coming in the opposite direction. 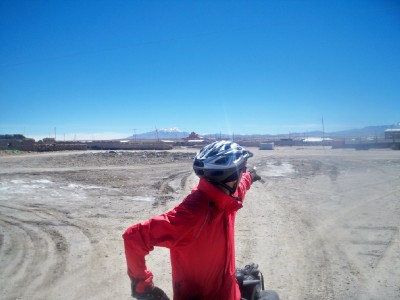 Showing us the way to the main road. He was cycling to Incahuasi, and then planned to head north instead of carrying on to Llica.

Although the road ahead for him would be slightly easier, he would be cycling against the predominant wind direction. After swapping a little info on our prospective roads ahead, we carried on.

The road from Colchani to Uyuni wasn’t as bad as I had been led to believe, and there were plenty of alternative tracks to take to avoid the worst sections.

On nearing Uyuni, we saw a car wash, and cycled in there to get the bikes washed down. The build up of salt was quite considerable, and it was 5 Bs well spent!