During my bike tour from Alaska to Argentina, I took a few days off in Liberia, Costa Rica during a holiday period. Here' my blog from the day. 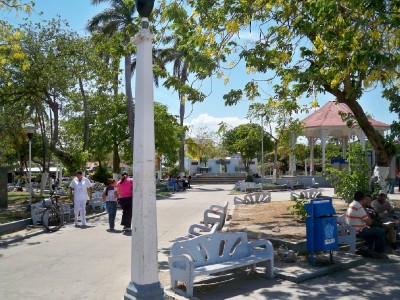 Last evening, I went to war with a colony of large red ants which had been sending scouts into my room.

During the previous evening, I had some initial success against them, and so today, I had bought some spray especially should they reappear.

Again, initial battles were successful, but soon, their overwhelming numbers became apparent, when the entire colony emptied itself out from behind the bathroom mirror.

At this point, it was time to make a strategic withdrawal, and I claimed a new room upstairs in the hotel.

The new room, which was up on the third floor, was not as nice as the other one, although it was a lot more airy. This was mainly due to a few panes of glass missing, and the terrific winds which were still blowing strongly both outside, and now through my room.

Actually, it was not as bad as it sounds, as it was nice and cool… ideal !

Today was the start of everyone's official holidays (equivalent to bank holidays in the UK). As such, a good 90% of the towns businesses were closed, and it had the feel of a ghost town. A nice relaxing feel compared to the normal hustle and bustle in these central american countries !

I had a little panic when i thought that McDonald's too may be shut, but thankfully the golden arches was open, so the routine of a daily treat of two cheeseburgers whilst in Liberia was easily started. Its very important to take time out to appreciate the little things!